Wow this has been an insane few weeks for RSL fans, and the fun is just beginning for everyone.  First this will be the last native posting on this current blog post, the move will take place on Friday morning as soon as we hit Seattle.  I will shot a little video from Qwest field and that will be the launch of the new blog, so about 1pm Friday you will want to check back then and you should find a link to the new site.

But let’s get on to the match, there is still a lot of time and neither team has released a lot of information but I believe we will see lineups very similar to what each team put out for their last matches: 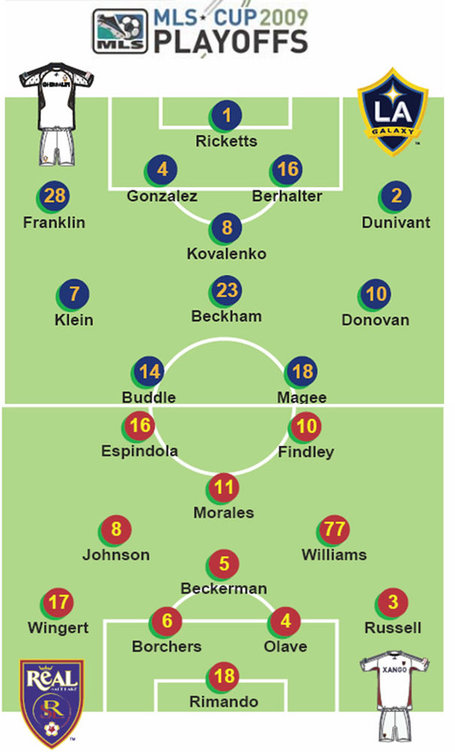 Of course we know that Yura got the start against Chicago and with Fabian still on the mend it will likely be Yura again, a bigger question is Robbie Russell or Tony Beltran?  Tony is one of few defenders in the league who this year has gone one on one with Donovan and shut him down.  The teams have been so evenly matched over the last 5 years with each team having 5 wins, 5 losses, and 5 draws, the only edge is that RSL holds a single goal edge with 24 scored vs. 23 for LA.  This year RSL holds the edge with a 1-0-1 record and 4 goals scored and 2 allowed in the two matchups.

This match comes down to a couple really basic facts, first can RSL control Landon and David?  Landon has 6 goals and 6 assists in 11 matches against RSL, while Beck’s has 2 goals in the only match he has played against RSL (last year’s 2-2 draw at RES), but RSL must also beware of Buddle should he get into the match as he has found the back of the net 7 times against RSL in the 11 matches he has seen action in against Real Salt Lake.  The RSL backline is one of the best the team has ever put on the pitch, the 35 goals allowed was the lowest in RSL history.  It is interesting that the LA offense scored 36 goals this year down from their 55 scored last year, the RSL offense put in 43 goals this year up from the 40 last season and RSL ended up with a +8 goal differential to matchup with LA’s +5.  This year LA scored a single goal against RSL in the run of play and one via PK, in the playoffs LA scored 5 goals in their 3 matches with 2 coming from the penalty spot, 2 from the run of play, and one from an indirect free kick.

The LA defense which is much improved in 2009 having allowed just 31 goals, down from their league worst 62 allowed last year, their improved for has lasted in the playoffs allowing just 2 goals in their 3 matches and both came in the run of play. That LA defense gave up 4 goals to the RSL offense this year, and that is the same number RSL has scored in the post season 4 scored, 1 from the PK spot, 1 in open play, 1 off a cross, and one off a corner. Robbie Findley has two of the RSL goals, while Javi Morales and Andy Williams each have one.  One interesting stat for you to remember is that the teamwork of RSL has shown in the 4 assists that RSL has in the post season (LA has 1), RSL has taken 36 shots with 15 of them being on goal.  While Omar Gonzalez might be the rookie of the year and Sean Franklin is an up and coming star, the slowness of Klein, Kovalenko, Dunivant, and Berhalter will put LA in a huge hole as they try to match up with the RSL speed up top.

So for me if RSL can control Landon as they have done in other matches this year, they will have a huge edge, but they can’t give up silly fouls in dangerous positions because "Golden Balls" has that nickname for a reason as he is still deadly on set pieces both going directly at goal and providing dangerous balls into the area.  I think the toughness of Will Johnson and Kyle Beckerman is more than that of former RSL’er Dema Kovalenko, we know Klein is getting old and not as quick as he used to be but he is crafty but so is Andy Williams and based on recent form one would have to pick Andy as the better player.  While they won’t probably play too much against each other Javier Morales is good but not as good as he was last year (he has looked better in the playoffs) but he is no Landycakes who is the best American player and the best player in MLS (and the league MVP).  I will take Yura and Robbie with their 20 goals and 6 assist in the regular season and their 2 goals and 2 assists over the 7 regular season goals and 6 assists that Buddle and Magee scored, their post season numbers are 1 goal and 0 assists.  The back line, no matter what some people think is one of the best in MLS, it is rare that Borchers has an off night and I think he did against Chicago but the backup and support of Olave and others is top notch with both speed and skill.  The backline of LA has been much improved in the playoffs but simply will not be able to deal with the speed of RSL, the question is can Robbie and Yura get the ball past Ricketts (the other Donovan)?  One also has to know that Nick Rimando is going to be full of confidence after that impressive outing in regulation, stoppage, and finally in PK’s against Chicago.

I think RSL has to play the same way they have since the playoff have started, aggressive, quick, and with sharp passing and making the other team chase them.  If they can, then it will be a RSL victory in regulation 2-1, but if they are forced to play a more defensive match it could easily go to stoppage time and could even end in PK’s and with the confidence of last weekend still fresh in their minds, I believe that would give RSL an edge there as well.

In the end it is in the hands of the RSL staff and players to Earn The Star,  and bring home the Cup.

Until tomorrow and a whole new world

OFF MY SOAPBOX
Earn The Star