For a RSL fan, a day I won't soon forget

Share All sharing options for: For a RSL fan, a day I won't soon forget

Listen I have never claimed to be anything but what I am, a fan who has made a choice to spend some time writing about one of the things I love in life, Real Salt Lake.  I am not a journalist, I will not go back to school to get a degree in journalism and if you have been willing to deal with typo's and spelling mistakes this long, I am willing to bet that you're not going to stop reading if I type "your vs. you're" from time to time. 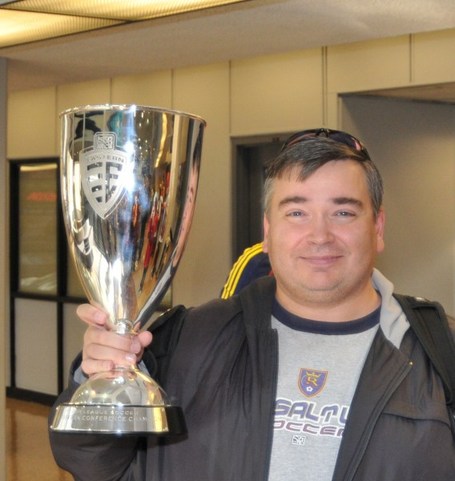 So this is why today was such an incredible day for me as both a RSL fan and a "media member/blogger".  It starts this morning as I saw well over a hundred members of various MLS (a couple USL supporters tossed in) show up to talk with each other and listen to MLS Comish Don Garber talk to them and answer selected questions.  It was an impressive site and I love that MLS and the Seattle supporter groups put on such an event.  As you might have read earlier, I stopped by the RSL practice today.  To be honest, the last 15 minutes of it, which is what the league required be open to media (someone might want to remind Bruce Arena).

So I have to tell you all a funny story, well I think it is funny.  So after the RSL players were done practicing and entering their interview portion of today'sevents I walked back to change my lens and had a brief conversation with Chris(a fellow RSL fan and photo jockey) and the topic eventually changed to Kevin Stott.  You know the guy who will be the head official in the MLS Cup, and if you have read my blog for any amount of time a head official who has been known to make some of the worst calls in MLS.  I formed this opinion of him a couple years ago after watching a number of matches but when the LA Galaxy came to Salt Lake City last year it became more than just an opinion.

RSL had taken a quick 2 goal lead in the match and momentum was on their side until a great shot by "Goldenballs" got the Galaxy back in the match.  Then the controversy began, a whistle blew and Kevin Stott pointed to a spot for LA to take a indirect free kick, something US Soccer would point out that it in it's Referee Review was the call indicated.  That didn't stop Beckham from doing what he is known for doing and scoring a super goal from a free kick, which should have been disallowed but wasn't.  This match also saw more controversy as a clearly onside Kenny Deuchar would score RSL's third goal of the match only to have it taken off the board as a claim of offside was made, another decision that US Soccer would point to and say was a bad call.

A couple of years ago I had heard a rumor about Kevin Stott being a LA Galaxy fan and I wondered if it were true how could he be the head official in a match that they were playing in?  With LA making it to the Cup on the heels of another controversial call (the disallowed Houston goal in regulation), one is left to wonder about how this the biggest match of the MLS season will be officiated?  I leave it up to all of you to tell me what you see, I will be on the sidelines taking some pictures and that offers me a very different perspective that the views on TV or in the stands so if there is something off kilter that would give one team an advantage over the other, let me know.

Anyhow back to my story, I basically had a conversation with the points made in the last 3 paragraphs and didn't think anything of it until I walked about 10 feet away and looked back to say something to Chris only to notice that who had been standing behind me?  Kevin Stott that's who.  I had to laugh a bit at that, but I meant what I said and I can only hope that if he did hear the conversation that he realizes people will be watching his every move.

I posted a couple pictures earlier but here are a couple quick interviews from practice as well(you have to download and save the files-I am working on a way to stream them):

This was followed by a quick lunch, another delicious Prime Rib and Cheddar dip at FX McRory's (if you are near Qwest field and need something good to eat, try this) and then back to the stadium for the Galaxy training session.  Which left a number of people from all sorts of media standing in a hallway waiting for Bruce to let them into cover the practice (a MLS requirement), but when finally permission was given to enter the playing field, all you saw was the backs of players heading out towards the locker room and a few non starters kicking the ball around as Bruce played peacock to some of his longtime media friends.  Nice to know that the rules don't apply to everyone.

Well as soon as that disappointment was over I hustled back over to my hotel to change computers and it was off to the MLS Blogger Roundtable.  I was asked to join this invite only event, and they probably are thinking that was a mistake they won't soon make again.  As I said before I am a fan, I will always be a fan and I sure don't do this to make money, but rather to spread the gospel of Real Salt Lake to as many people as care to read.  Around the room were some big names of "blogging" (and I will write more about this later), and then me to the best of my knowledge everyone at that table was employed by someone to report about soccer or entertainment or both and needless to say I think I ruffled a couple feathers.

Then it was off to meet up with the gang as they were hanging out just a couple blocks away at a place that is some strange combination of a world class pub with over 100 beers on tap and what looked like an average place to eat.  Everyone looked done with dinner as I got there, but before they were ready to leave one of the managers came over and told them they needed to make less noise.  It appears some of their customers (none of whom were spending as much as the 20 plus RSL fans) couldn't enjoy their dinner with all the yelling and cheering going on.  So we left on our way down to the official RSL headquarters FX McRory's, it was great to see the group once again walking the wet streets of Seattle and gaining more RSL fans who often were wondering around town.  I had to laugh as several cars drove by honking their horns in support and I hope more of Seattle will be showing their support today as RSL takes the pitch.

Another great meal and some drinks while I tried to post an update on practice but with over 400 RSL fans packed into the place it was hard as so many people wanted to stop by and talk a bit.  My waitress on the night, the lovely Brie, was amazed that I seemed know everyone or that they all knew me and so it was as while my burger got cold (and everyone ate my fries) and my battery went dead on my laptop, I finished up my post from last night.

It was so nice to be able to spend some time with so many people in my RSL family and if you don't know what I am talking about then I suggest you come on out to Rio Tinto next season and spend some time watching soccer and you will soon have your very own RSL family of fellow fans who will quickly become friends and then become like a second family. The funny thing is you will end up with your close family and you will end up with a larger extended family as well.  Getting to see the joy that people like Kramer, Sara, Chris, Kevin, and so many others were expressing last night, truly was a day and night that I won't soon forget.

OFF MY SOAPBOX
Earn The Star