So I have been a bit confused this week by everyone labeling RSL the underdog, during the regular season RSL won 11 matches, while LA won 12.  Yes the number of losses was much larger between the two sides, but head to head over the last 5 years these two sides are as even as it could get 15 matches played and each with 5 wins, 5 losses and 5 draws.  RSL had scored 24 goals against LA and given up 23 in those matches, So was anyone surprised by the fact that the MLS Cup would go to stoppage time and eventually PK's?  Once that happened it was going to end like this: 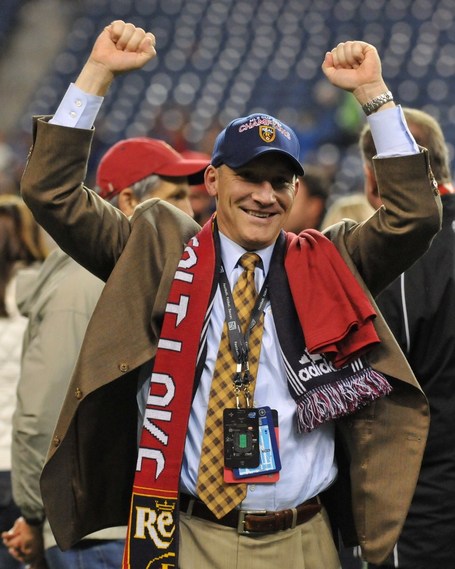 Maybe, just maybe now Bill, Garth, and Jason will get a little slack from the fans.

The victory means a lot of things for RSL but a couple of them are going to be huge for the team.

First up is the boost of season ticket sales that should come from this win could be over 2,000 if fans react the way I imagine they will. Second up is that no more SuperLiga for RSL we have earned the right to play in the 2010 CONCACF Champions League. Third, no play in matches for the US Open Cup instead we automatically make it into the tournament.

For RSL season ticket holders this will be a huge impact as now the 5 non MLS match tickets that are part of your season ticket package will be matches that matter, still against teams from around the US, Mexico and the rest of CONCACAF, but they will all matter.  I think the prestige of being a RSL season ticket holder will now be something others envy as they jump on the bandwagon (the more the merrier).

So here are the official match stats:

OK, time to start packing and getting ready to come home, and we do so as Champions

OFF MY SOAPBOX
We Are The Champions