So I have wondered how long that the Cup buzz would last and when would it turn into a hangover, well that answer came on Wednesday as I began showing symptoms of the flu.  I am still down with the flu but it is a small price to pay for what was a glorious week.

The celebration at Rio Tinto stadium on Tuesday evening was great as 5,000 plus fans showed up in freezing temps to join the team, staff, and owners celebrate a historic week for the franchise.  I do find some sense of humor when a "hack" reporter for the "examiner.com" questions the level of support RSL fans showed at the Cup match, it makes me wonder if he was even at the match?  He wondered where the RSL fans were during the march to the match, well I was standing on the deck of the 3rd level of Qwest field (where the 2,000 plus RSL fans were put for the match) and this is what I saw: 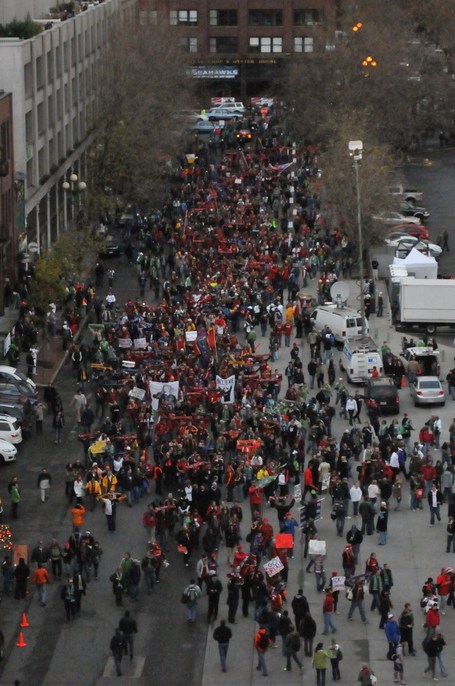 Now remember that Seattle fans were green, the LA fans white or blue and red is the color RSL fans wear.  Brian, perhaps you should spend some time at Rio Tinto before you try to write an article explaining that RSL fans should learn from those in Seattle.  To compare a market with 4 million people plus to one with under a million, one with a downtown stadium surrounded with bars to one in Sandy surrounded by, well Sandy.  Is just a bit unfair.  If you think the brilliant chant of Seattle with the reply Sounders is a great chant well it shows how little you know.

OK enough picking on the local Jazz fan who is used to scripted cheers lead by a scoreboard and lacking any personality.  It is almost as tiring as listening to Beckham complain about his nicks and bruises as he collects a paycheck larger than the RSL payr oll by a factor of 3x.

So while I have been out a big chunk of the week, I have laughed at how quickly the RSL win was pushed to the back burner by the local media, I mean after all BYU and the U of U were going to play football on Saturday and despite both of them looking at playing in minor bowl games it still is big news here in Utah.  So it is, the limelight was stolen after just hours after winning the first professional championship in Utah in over 30 years, by a QB who is representing BYU spewing hateful comments after a football match.

What was missed by many this week is that some changes have happened on the RSL roster, one was a known as Yura Movsisyan took a trip to Denmark to start getting the next phase of his life and career in order.  While he can't play until January he is able to look for housing and get the details worked out, and if Yura thought RSL pulling out a late season miracle run was a daunting task, his hands are about to be really full.  Randers FC is currently 0-12-5 at the bottom of the Danish table (you can follow it here) as they are at the halfway point of their season.  Yura will be missed by the fans and over the last couple months whatever hard feelings happened this summer have been put behind and should Yura find himself looking for a place to play he will always be welcomed back at Rio Tinto.

The expansion draft had many fans on pins and needles and when RSL released their list of protected players it looked for sure that a player who had just played a part in the MLS Cup Championship would likely be gone.
Robbie Russell, Andy Williams, Clint Mathis,  and Ned Grabavoy were among the unprotected in the Wednesday Expansion draft, but RSL wouldn't lose anyone in the draft (one of 5 teams to not lose a player), but as the day went on the truth of the situation came out that Philly agreed to not take anyone from RSL as part of the conditions of a trade that sent RSL backup keeper Chris Seitz to the Union for allocation money.

While it is tough to see a very talented young player like Chris leave, with Nick Rimando putting in another stellar year, it would have likely meant another year of Chris in a backup role and that simply wasn't going to help him become better.  I wish Chris the best and I stick to my thought that he will become one of the best keepers in MLS, he has all the tools needed and with this chance to realistically compete for a starting job, it could be the break he needs.

OK, that is it for now and I have just sat through all the Sunday sports shows and not a mention of RSL or the MLS Cup, oh how quickly they forget.  It may all be for the best as I got tired of having to play nice with those in the media who jumped on the RSL bandwagon in recent weeks.  If you can't commit to covering the team all the time, then please step to the back and let those of us who are there week in and week out do what we do.

OFF MY SOAPBOX
We Are Still The Champions