I wonder if MLS HQ wrote the spin for WSS?

Share All sharing options for: I wonder if MLS HQ wrote the spin for WSS?

So in my email today I got an ad from World Soccer Shop, it was titled "Our 2009 Year in Review" and while it was mostly dedicated to European teams, as it should be the did give a little love to the USMNT for their Confederations Cup run, but when it came to MLS, well it was Seattle and Beckham. Now I have no problem with the love for Seattle, they sold a ton of merchandise, had great crowds, and made a super run for an expansion team, but Beckham? He played in 11 regular season matches and had 2 goals and 3 assists, heck Esky had two goals in 3 matches before he got hurt, but if you were to read this ad: 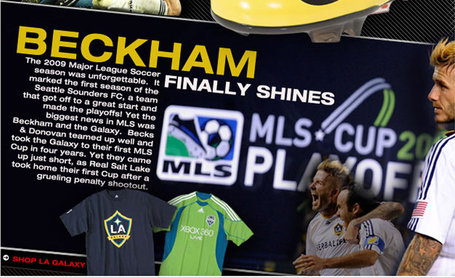 If you want to see the whole ad (click here)
If you didn't read the last line of the text you would swear that LA won the Cup. I know I get that David is big, and yes when he stays away for 2/3 of the MLS season it appears his team has a better shot of making the playoffs than when he is here all year, and I get that he sells merchandise. I just thought it was funny that the biggest news of the MLS year was the Galaxy losing.

Oh and here is the latest from the World Cup poll I started a couple weeks ago (since it will feature Landon vs. David in the first match of the group):