Share All sharing options for: The 5 best and 5 worst things about Real Salt Lake in 2009

Now there is n, o doubt that I am going to make some people mad with this list, that isn't my intention.  I can look back to where RSL was in 2005 and where they are today, and in every aspect of the organization they are better.  That doesn't mean they are perfect, it doesn't mean that there isn't room for improvement.  Also just because I think something is bad, it doesn't mean that it is bad for everyone or bad for the team, it means I think it is bad and no it doesn't have to be anyones fault.

Number 5 (bad)- Luis Miguel Escalada - This one is a tough one for me, I had faith in his ability to be a game changer in MLS.  It is clear with this team that talent isn't enough, LME had talent and a lot of it.  RSL is a team that is focused on hard work, top level fitness, and a the team is the star mentality.  The shame is that for whatever reason, and I don't know which one or ones kept him from being a success at RSL, for me it really was a shame to see that much potential and talent fall by the wayside.

Number 5 (good)- 2010 Season Ticket Prices - First this was a cool thing because I was given the privilege of delivering the 2010 pricing to my readers before anyone else had access to them.  That blew me away but it showed that RSL had faith that their diehard fans read my blog.  The biggest thing with number 5 is the simple fact that the organization knew the economy was a major concern and they wanted to give their fans a break and at the same time offer a good price for potential new fans.  I love that they haven't changed their pricing model since winning the MLS Cup, a class move by RSL.

More of my list can be found after the jump:

Number 4 (bad) - La Barra Real - I know, go ahead and start calling me names now.  Supporter groups should support, and too often this year when getting in trouble LBR simply walked away from the team they claim to be fans of.  I get making a statement, but really when you get caught doing something wrong, either use your resources within RSL (they have plenty) or take it like a man, walking out on your team is something a supporter should never do.  Also, be willing to be part of the larger supporter community.  That means either help others learn your chants or be willing to learn others.  Stop trying to separate yourself from everyone else, you did it in Seattle by not marching with the larger group, you did it when you wanted all the early access passes to set up at Qwest field, and you even did it during the celebration at Rio Tinto.  You guys could be the difference maker in the RSL supporter section, but it will require everyone doing their part.

Number 4 (good) - La Barra Real - I know I just listed them as a bad thing, but they aren't really.  It is great to have a group that can reach out to another part of the local soccer community in Salt Lake.  I love that they bring an almost non-stop energy to the matches and have the ability to organize themselves very well.  They have shown the other supporter groups that working with the RSL front office can work, and can be a good thing.  I can't wait to see what can happen if we can get multiple groups working together, there will be no better year to do it as fans should be coming out of the woodwork as we defend our championship.

Number 3 (bad) - 2009 RSL Road Woes - 2-11-2 with just 9 goals scored, only New York was worse on the road.  I consider that San Jose also had 8 points but scored more goals than we did.  In the end RSL showed that they can play on the road and do so quite well. RSL will start the 2010 season with at least 2 of 3 on the road and need to find a way to do a whole lot better in San Jose next year than they did this year.

Number 3 (good) - Nick Rimando - For those of us who remember that Nick was here, gone, and here again all in a couple weeks as a result of the Scott Garlick retirement, we count ourselves lucky.  Not only has Nick been RSL's rock in goal, but he has been huge in the community and helping to build up RSL but soccer in general.  He has inspired many at Rio Tinto with his amazing saves and incredible personality.  While the callup to the USMNT next month may be a reward for his stellar play in the MLS playoffs, and while the roster is stocked with MLS players any time your national team calls on you it is an honor.

Number 2 (bad) - Yura Movsisyan - I know RSL did everything in their power to keep Yura (short of making him a DP) but it didn't happen and the reality is that it will impact RSL in 2010.  Love him or hate him Yura was a major part in both the 2008 and 2009 playoffs for RSL, and he was a heck of a nice guy.  I wish him best and will try to keep tabs on him as he starts his career with Randers in a couple weeks.

Number 2 (good) - Robbie Findley - Robbie has made progress every year since joining RSL, and while I think 2010 could be his real "breakout" year, 2009 will be tough to match.  Robbie scored a total of 17 goals, regular season and playoffs.  His speed and willingness to bang bodies with big defenders have caught the attention of many around the soccer world, and as a young striker he will continue to develop and only get better in my opinion.

Number 1 (bad) - RSL Communications- Or the lack of communications, yes I know they are trying but when they made the switch to the new email system and company something went wrong and to date they haven't fixed it for many customers.  Attempts to use their blog (which I love) and their facebook page as subs for the season ticket holder emails, simply fall short.  When you know you have an issue with Comcast, the largest internet provider in your market, you deal with them to resolve it.  I know many fans that have simply given up on RSL over the constant issues and changes in reps, and yes I know that RSL is working hard to come up with better options and solutions, but if you want to be a world class organization you need to make sure you can communicate with your customers.  My company sends over 50,000 emails a day and when they get 50 that fail, they go into full panic mode.  Your communications lead to your sales, which leads to revenue.  Get it dealt with. 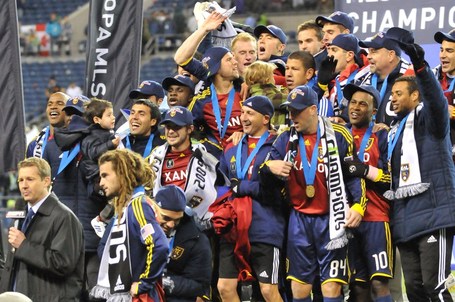