Share All sharing options for: Real Salt Lake by the Numbers - Week 27 edition

Well it has been about a month since I did a by the numbers post and I thought it was time for an update on some of the numbers for Real Salt Lake.  With RSL clinching a playoff spot a couple weeks ago and the team being in the top 3 of every major power ranking done by people it is interesting that for the last couple weeks the very mathematical Sagarin ratings in USA Today for MLS has RSL at the top and while in the "ELO Chess" predictions it has RSL finishing second to LA, the "Pure Points" system of forecasting has RSL finishing at the top of MLS this year.

Of course one of my favorite sites for looking at the numbers is sportsclubstats.com which has RSL coming into the playoffs as the #3 seed most likely (West #2), oh but we know the final 3 matches should all be interesting and while I have never been much of a pro-union kinda guy, I will be cheering for the Philly Union tonight as they face the Galaxy.

So let's start our look at the numbers by pointing out that RSL currently is on pace to tie or set 6 MLS records:

RSL has 3 matches left to either hold on or set new records and it will be interesting to see how they do, RSL also set two of the 4 longest shutout streaks this year when they had the 4th best streak in MLS history of 567 minutes ending in July, and then took over the #3 all time streak with a 568 minute streak that ended with Conor Casey's goal a couple weeks ago.  Impressive to say the least.

So there are also a number of team records that have either been set or are likely to be set before the end of the season:

OK, so let's start by looking at points: 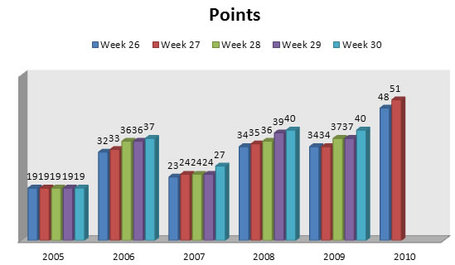 as you can see RSL is in rarefied air as far as points go, our previous best was 40.  We beat that on week 23 of the season and have continued to move higher and higher on the table and continuing closing the gap with LA.  No matter the final outcome it clearly has been a very successful year for RSL.

The defense has set records already this year and this graphic shows just how dramatic the improvement has been: 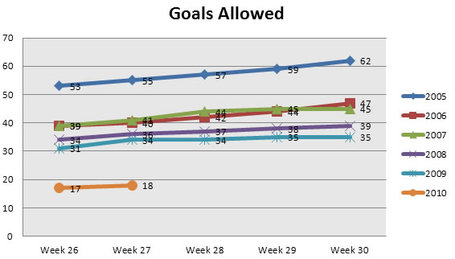 Last year was the best defensive effort every by RSL and this year we have cut that number almost in half, improved play by Nick Rimando, Kyle Reynish, Chris Wingert, Robbie Russell, Tony Beltran, Nat Borchers,and Jamison Olave, along with the rest of the team has simply been amazing to watch.  I have to think that RSL not having a single red card in MLS action this year has been one of the keys as well, in 2009 RSL had 8 red cards issued to them.

Finally there are of course the goals scored: 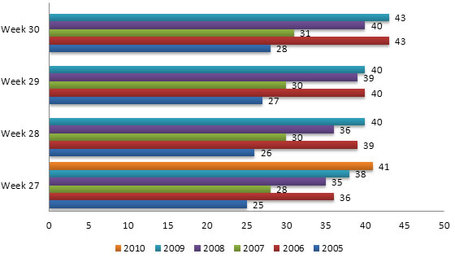 I find it funny that at the start of 2009 I asked Jason what RSL would do to score more goals and did he think we needed a 10-15 goal a year guy on the roster.  He asked me how many 10 goal guys did the Crew have when they won MLS Cup in 2008, the answer was none.  Last year Robbie Findley ended up with 12 goals including the playoffs, and right now RSL has just one guy with 10 goals (Alvaro Saborio) but 8 guys with multiple goals, and 13 guys who have found the back of the net in MLS play.  Jason's answer then and now is "more guys, scoring more goals".  How true it is.

The next 3 matches will be exciting to watch as RSL continues to push for more League and team records as well as the fight for the Supporters' Shield.