So after Real Salt Lake got dealt "victory gold" last year, did Adidas do better with the Portland Timbers?

Share All sharing options for: So after Real Salt Lake got dealt "victory gold" last year, did Adidas do better with the Portland Timbers?

So I am a huge fan of Adidas, about half the stuff I wear on a regular basis has their logo on it, but I have become much more skeptical of their efforts when I saw that a vast majority of merchandise made available for the MLS market was simply "cookie cutter". I thought the "victory gold" and "electricity yellow" kits they offered up were awful and my opinion of their offerings for MLS dropped even lower.

This offseason my opinion hadn't improved as the Dynamo came out with a design that looked more like that of a 7-8 yr old girls team than a MLS side, the strange picture of the new Seattle kit with the "tech fit" highlights looking like they were done in silver (it was just a reflection they tell me). So my expectations for the unveiling of the Portland Timbers new kit, were very low.

When their fashion show started with them pulling up in a new themed jet, I was like that is a nice copy but RSL's "Real Blue" partnership with Jet Blue was the original and while imitation is the most sincere form of flattery, it is just imitation. Also they should have done a couple practice runs before the live event, it looked very clunky, but then the real show began as they showed off what the Timbers will be wearing in 2011. 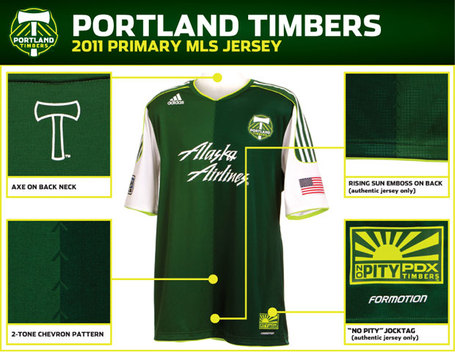 I love the attention to detail, and I can even deal with the dual color scheme (not my favorite but OK). I did have to laugh a bit at their "No Pity" patch, might want to win a match in the league before getting too caught up in their own hype.

After the jump take a look at their "2nd Kit":

So most teams go with a white second kit, or with their secondary color and that lead me to expect something white with yellow and green highlights but Portland and Adidas shook things up a bit and embraced the "Rose City" concept with this design: 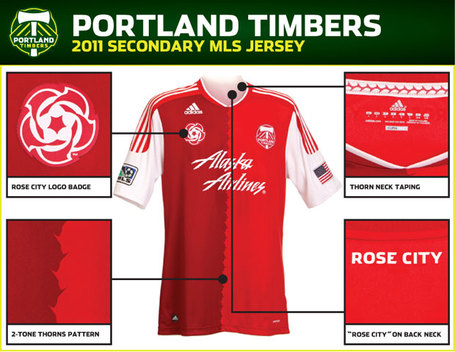 I have to say I love that they went out of the box but I think the two color look ruins what could have been a very cool 2nd kit. As much as I can get used to it on the home kit, this one it just looks kinda silly to me, and makes me wonder why they would have taken a unique design of the home kit (unlike anything in MLS) and then tried to beat that horse again and make it work on the 2nd? Oh Adidas, when will you learn?

This 2nd makes me actually begin to appreciate "victory gold" but makes me worry that MLS might see another year of "cookie cutter" look across the league. It will be interesting to see if they vest more time and creativity this year.