The US loses the 2022 World Cup to Qatar? Really? A look at the facts FIFA ignored.

Share All sharing options for: The US loses the 2022 World Cup to Qatar? Really? A look at the facts FIFA ignored.

So I had this wonderful rant about how wrong the decision made by FIFA was, but then I thought I would leave that decision up to each of you.  I do think there are a couple facts that you need to know about, and I am not talking about the facts like Qatar refuses to recognize Israel as a nation (and had to issue a statement to FIFA that they would let them play in the World Cup if they qualified), or that alcohol is illegal there (but they will allow it for the Westerners during the World Cup), or their poor treatment of women, or even their record on Freedom (thanks Sounder at Heart).

No I thought I would simply allow the facts from FIFA's own summary of the World Cup bids speak for themself:

First up is the Bid Summary- Overview of key information: 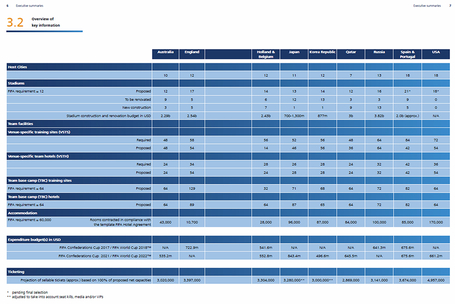 you can click the image to see a larger view of this page, but for me the major fact on this page is two fold:

First you can see that Qatar only proposed using 7 cities as Host Cities, Qatar is a very small nation with under two million total residents, and they don't have many cities large enough to support a soccer stadium and that is why they only offered up 7.  The US had to reduce a list of qualified cities from 30 plus down the 18 on their bid.

Second is the fact that the US had a projected total of just under 5 million tickets, a goal that everyone knows would be very easy to reach.  Qatar's bid was the smallest of any bid, with 2.87 million, more than 2 million fewer than the US bid, so clearly this decision wasn't about exposing the game to the largest number of fans at actual matches.

after the jump you will see some other facts, again straight from FIFA 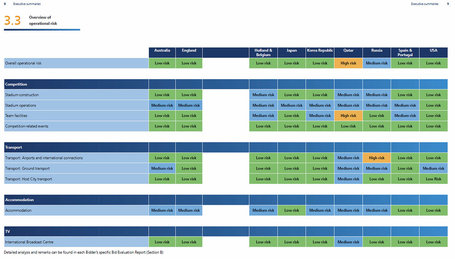 Well as you can see only one nation's bid was rated a high risk by FIFA, Qatar.  The US was a low risk, so let's take a look at the second page of the Operational Risk report (nothing new just more facts and data):

So according to FIFA's own documents Qatar was the only high risk option, the US was a low risk with the potential to sell more tickets than any other World Cup in history.  FIFA also hired a consulting firm to look at the bids and to determine which bids would be the most profitable (clearly something they wanted to know since they paid for the study).

It is interesting that only 1 city for each of the two World Cups to be awarded got a 100% from the consulting firm, for 2018 that was the England Bid, while the Russia bid was the lowest with a 86%.  That Russian rating would was a huge number when compared to Qatar's 70%, and yes the only 2022 nation with a 100% was the US.

So I get that Blatter wants to leave a legacy of taking the World Cup to places it has never been, well he may have that legacy taken care of, but many will wonder if he has really done what is best for the sport he was assigned to grow and safeguard?   I also get that there are a number of nations around the world that simply do not like the United States and England, well here is the list of the nations on the Executive Committee, and you have to wonder how the votes went?  We know the numbers but not who cast what votes:

The longest voting session in history was three rounds, prior to today. Balloting for the 2022 World Cup wasn't decided until the vote was down to two bids, a process that went four rounds. Ultimately, the bid that nearly won it on the first ballot was the clear winner.

Well, there you have the facts.  Now I know that the bid of the US wasn't perfect, but given the facts that FIFA presented one simply is left scratching their heads about the decision that was made.  Perhaps nothing was more telling than the comments of Eric Wynalda, referring to Qatar winning the '22 event, said,

"Money talks. ... (Qatar) just bought the World Cup." Wynalda: "I'm trying to figure out if this is about soccer or natural gas and oil, because that's what just won" (Fox Soccer Channel, 12/2).

If you want to read some more reaction to the decisions justclick here to see some comments collected by sportsbusinessdaily.com

Today I lost what little bit of faith I had left in FIFA, and while I can't prove any more corruption than what has been reported, when you consider their decisions today with those that would improve the decision making of officials during matches by using technology, I am left believing that perhaps decisions the leave people scratching their heads is now the norm for FIFA as they join the IOC as organizations that I simply don't trust.