With US Soccer coming back to Utah, do I dare?

Share All sharing options for: With US Soccer coming back to Utah, do I dare?

So I developed a very bad taste in my mouth for US Soccer last summer when they came to Utah for training and then for their World Cup qualifier against El Salvador.  I am actually OK with the part where they didn't grant me media or photo credentials, given the way they treated all the other local non-traditional media, it did bug me that they denied people photo credentials when there were so few (fewer than a MLS match) photographers there.

I thought the way they treated the public was awful, I get that the World Cup is a big, no a very big deal, but so is the responsibility of US Soccer to grow the sport, hell it is on their web page "As the governing body of soccer in all its forms in the United States, U.S. Soccer has helped chart the course for the sport in the USA for more than 90 years. In this time, the Federation’s mission statement has been very simple and very clear: to make soccer, in all its forms, a preeminent sport in the United States and to continue the development of soccer at all recreational and competitive levels."

I would ask how do you do that when you chase away young kids and their mothers who are trying to watch a few minutes of a practice session?  Did they look like soccer spies from El Salvador?  Did US soccer have one open to the public event the entire 10 days they were in Utah?  Nope, the only time the public could see the players was to either pay the inflated prices or catch a glimpse of them in a local restaurant or bar.

Would it have hurt them to open up the last 30 minutes of a couple practices so fans could see their favorite players, take a couple pictures and god forbid ask for an autograph or two?  Could they have not spared an hour or two in the afternoon to show up at a local soccer clinic?  I know from asking the athletes that they weren't opposed to these types of activities, but US Soccer didn't want anything to do with them.

Another bone to pick after the jump:

I think the way US Soccer responded at the blogger summit in Seattle, was a bigger issue for me as it became clear that their interest is mainstream media, and their version of online media are huge for profit outlets be they normal media or sites that are as interested in putting pictures of "hot chicks" on their blog as they are covering soccer.  They seem very uninteresting in fan based media, and since that is clearly what I am, a fan with opinions both positive and negative about all things soccer, do I dare even apply for media credentials?

I have little doubt that I would be turned down yet again if I were just blogging on my own, but know with the association with Steve Davis and SB Nation, they might just consider it.  I know they want guys and gals in sports coats and with their journalism degrees in the press box, something I will never wear to a match and sorry my marketing degree doesn't qualify.  They want people who will simply report the match as a story, you know so and so entered the match, so and so scored.  It is unfortunate that they seem happy with that, because if they should ever decide to open up the doors and embrace the new world of online media, they would find mixtapes of goals, innovative interviews, and passion that reporters lack but fans possess in abundance.

I am sure as I get ready to add: 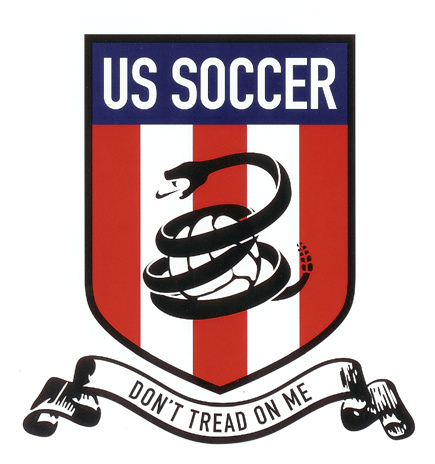 to the RSL crest tattoo on my right calf that I am probably dooming myself to a lifelong ban from US Soccer approved media, so I will chose to report on the March 31st US vs. Mexico womens match from the stands. While that will mean I can't bring a camera lens longer than 2 inches (really their rules) in with my camera despite the fact that every lens I own is longer than that, while it means I won't get access to the official media guide and have to likely buy a souvenir program to get get the latest updated rosters and names.

I will still cover the event because it is worthy of covering even if I have to do so from the stands, and maybe just maybe someday US Soccer will begin to appreciate those of us who write about soccer because of our passion for the beautiful sport and their desire to make the sport grow by talking about it, not only on the weeks of events but all year long.