So what are RSL fans supposed to do in the offseason?  Well today they play in a FIFA 10 video game tournament, a tourney that included fans, players and even some staff members.  It was a great crowd of not only those playing but a number of fans showed up to watch the action as well.  In all about 250 fans showed up in all and not only was it a great time for the players, there were some season tickets sold and over 100 tickets for the first match sold as well. 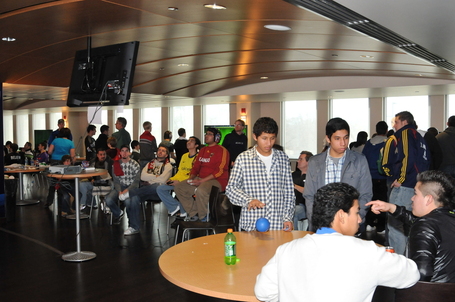 I really believe events like this give fans a great chance to meet the players they cheer for on a personal basis and that is part of RSL's "Fan for Life" campaign.

The action is still going on, but I will get you the info on who wins the tournament and a pair of season tickets for the 2010 RSL season.