Over 100 people stated the day to prove they were the best at FIFA 10, and claim the title Champion and two season tickets to watch Real Salt Lake defend their 2009 MLS Cup Championship.  In the end it was two friends who would face off to see who was the best.

Jeff Gardner was in the role of mentor, while Nicolas Duncan was the student, Jeff would use the French National team, while Nicolas would use club side Arsenal from the English Premier League.  Nicolas was the first to score but Jeff answered back to even the score at 1-1, but then Nicolas found the back of the net one more time and in the end send France and Jeff packing as the final whistle blew in the game and Nicolas was the 2-1 winner.

So while I didn't play in the tournament, no time for video games for me, it appears I wasn't the only non-player interested in both the action taking place on all the TV's in the Budweiser Club Real at Rio Tinto Stadium as over 120 people paid the $5 fee to stop by and catch all the action.

It appears that Andy Williams decision to not take part in the tournament, despite some boasting online via facebook, proved to be a wise decision as Andy got spanked in a couple matches against Robbie Findley: 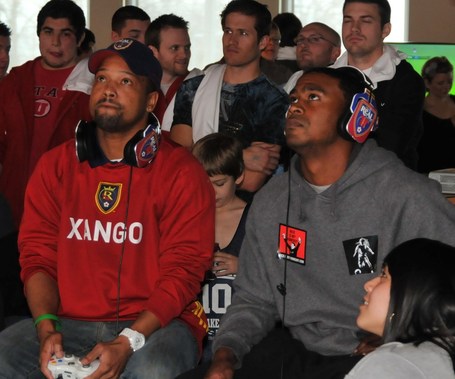 Eventually Andy would find someone that he was able to matchup well against, I still think he lost but it was closer: 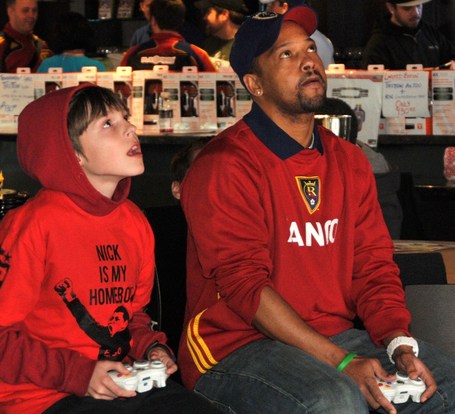 Kyle Beckerman was not only out there hawking his KB5 clothing line, but was the only RSL player to make it past the first round of the tournament, before being knocked out in PK's: 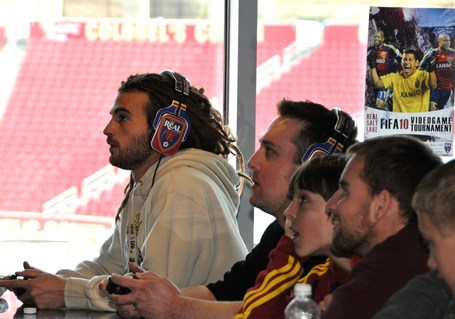 While RSL's Raphael Cox didn't take put in the tournament, like Andy Williams he did take time to play a number of matches against some of the many fans that had gathered: 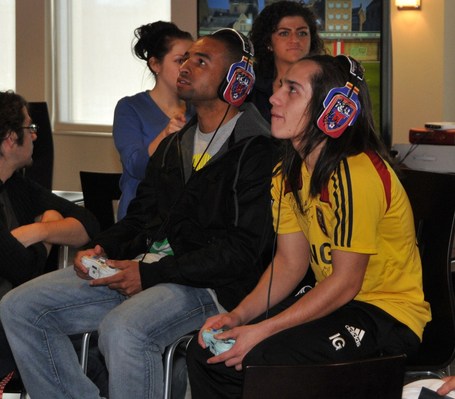 Despite a number of players leaving after they had been eliminated a good crowd stayed to watch the final matchup: 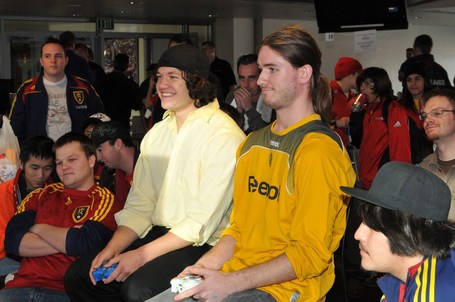 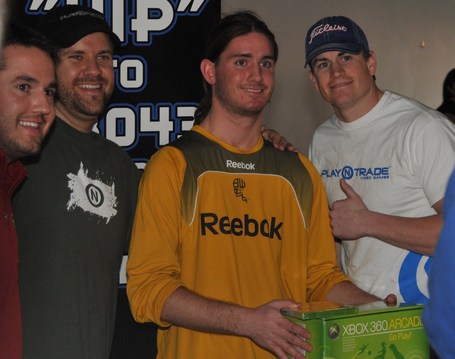 One of the challenges of any sports team is keeping their fans engaged and involved during the off season, and I have to give RSL a lot of credit for hosting an event like this to allow fans to meet and greet some of the players, but also to bring out some video game fans and let them see the great facilities at Rio Tinto and hopefully encourage them to return once the season starts.  This isn't the only event RSL has going on to keep their name on the tips of tongues of their fans, the Championship Cup Tour is taking the MLS cup all around the state as the celebration of the Nov. 22nd victory continues.  You can follow the exploits of the tour on Behind the Shield .

As much as I often make fun of the efforts of MLS to market their league and team, I give real credit to the efforts being done by most of the MLS teams to really establish their brands.  That is why I think a more active partnership with both the national media and other partners like Adidas are important to help further the sport both at the league and team level.

I know RSL is already working on the details of Real Week, which is a series of events the week before the home opener on April 10th.