Well we now know that the MLS season will start on time in just a few days, so it is time to do a season preview.  I will start with the Eastern Conference (of which RSL is the 2009 Champion of).

The end of 2009 saw the Eastern Conference end with these standings: 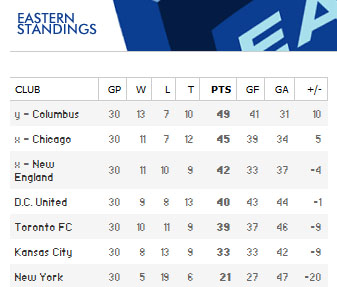 So what will happen in 2010, check out my predictions after the jump

Well we know one thing, it is very likely that DC United will win either the MLS Cup or the Supporters Shield in 2010. We know that because in 5 of the last 6 years the winner of the Carolina Challenge Cup has gone on to win one or the other, and on the basis of their 2-1 win over RSL last Saturday DC United has won the CCC.

Now that being said, lets dig into the details starting with the NKOTB (New Kids on the Block) the Philadelphia Union, they are the third team to join MLS in the last 4 years and will look to try to repeat the success of the Seattle Sounders who in their first year made the MLS playoffs.  The Union are still filling out their roster, but will be highlighted by some fairly big names; Danny Califf, Michael Orosco, Fred, Shea Salinas, Alejandro Moreno are probably the biggest names, along with the number one draft pick Danny Mwanga.

Philly will be one of the young teams, with nobody over 30 on their roster, and 4 players 18 or under.  For me the big question is who is the leader of the team?  Last year the Sounders had a core of players from their USL side, but put two huge veterans of world soccer in their lineup in Keller and Ljungberg, who clearly were the leaders on the field.  I just don't think Fred or Moreno are the leader type, it may be up to Califf or Shavar Thomas to step up and be the leader of this expansion side.  I have a feeling that they will struggle in 2010, as most MLS expansion teams have done since Chicago came in and won it all in their first year, expect the Union season to end before Halloween and their record to be the worst in the East.

In 2009 the New York Red Bulls were the worst team in MLS, with just 5 wins and 19 losses.  The Red Bulls were the winless on the road last year, and 5-6-4 at home.  Things will be better in 2010, they have a new head coach in Hans Backe, the Sweede most recently was in charge at Notts County, but has had stints as an assistant coach recently with both Man City in the EPL and the Mexican National team.  Add to a new coach, a brand new state of the art stadium in Red Bulls Arena, I saw it today as the Red Bulls beat Santos and it looks incredible.

I still think the Red Bulls are looking for someone who can deliver the ball to Juan Pablo Angel, it was clear last year that without Dave van den Bergh, that the scoring was the problem.  In 2008 the Red Bulls scored 42 goals while giving up 48, in 2009 they scored just 27 goals while allowing 47.    They have added Carl Robinson to their midfield, but I have a feeling that moving the speedy Dane Richards to jump start their offense.  I think the season will be rough on the Red Bulls, as they currently have 6 guys on their roster over 30 and the MLS season is a very long season starting this week and not ending until the end of October.  Look for the Red Bulls to be better but still end up in the bottom half of the Eastern Conference.

KC ended 2009 with just a 8-13-9 record and 33 goals for and 42 goals against, KC has been at the center of a lot of controversy all off season over the Kevin Hartman situation, which was one of the rallying points of the players in the CBA talks.  Beyond the eventual trade of Hartman to FC Dallas, it has been a busy off season for new head coach Peter Vermes, they have replaced Hartman with Eric Kronberg and added 9 new faces in total with no MLS experience, in fact only 6 players on their roster have 4 or more years of MLS experience, while 15 have one or less.

So with players like Josh Wolff and Jimmy Conrad leading this inexperienced group, it could be a real up and down year for the Wizards.  It takes time for players to really jell and get used to playing with each other but they have added players with a lot of quality and many have serious international resumes.  I have a feeling that the Wizards will jump up the table this year and finish in the top 5 in the East, and will be challenging for a playoff spot at the end of th year.

It was a final match meltdown against the Red Bulls that cost the boys from Toronto a playoff spot.  I have a feeling it was that collapse and the inconsistent effort all year long (10-11-9 with 37 for and 46 against) that lead to them looking to Preki to come in as the latest in a long line of head coaches for TFC.  In fact they have had more coaches than years in the league, but Preki did wonders for Chivas USA and they hope that he can once again turn a struggling team into a contender.

They haven't made any really huge moves in the off season and they shouldn't need to, they have some real talent on their roster with names like Barrett, de Guzman, De Rosario, Garcia, Wynne, Cronin, and add in some young talent like Frei and White and you have a fairly solid squad.  I have a feeling that it will be a nail bitter again at the end of the season for TFC and their fans, it all could come down to the last match of the year at DC (TFC end with 3 of 4 on the road in 2010).  I think they will be fighting with KC for the final Eastern Conference Playoff spot.

Well you know that they are going to win something in 2010, if the CCC charm stays to form.  But things aren't going to be that simple for Curt Onalfo, their lineup looked good in the preseason when they stuck with 13-14 players but MLS is a very long season and it will be difficult.

I believe that the season will come down to two players for United Santino Quaranta, who when he plays to his abilities is one of the very best players in all of MLS, but who has failed to live up to his abilities or potential.  The other key will be the last of the MLS originals Jamie Moreno, age is creeping up but if the preseason is any indication well Jamie may have found the fountain of youth and if he can keep it up, well DC United may be able to find the post season for the first time in a couple years.

Well no team has lost as much talent as New England, gone are Heaps, Albright, Larentowicz, Raltson, and Wells Thompson, it will be hard to replace that much talent and adding Cory Gibbs simply won't be enough.  While I think New England has the real MVP of the last two years in Shalrie Joseph, but it looks like this might be a rough year for New England.  Can they really replace Matt Reis with Preston Burpo?  Will Taylor Twellman, get pack to fitness and return to action, or will he like LA's Alecko Eskandarian have to step away from the sport due to concussions?

I think this will be the first year in a long time that New England doesn't make the playoffs, Steve Nicol is a brilliant coach but I don't think he is a miracle worker.

Well the Fire have made news recently by the release of their top 10 keeper Jon Busch in favor of an unproven backup, of course the real changes that will impact the Fire is the loss of Blanco, who has returned to Mexico to play and may or may not return to Chicago sometime after the World Cup.  Of course a new coach will often make big changes but a coach with no MLS experience can easily make mistakes, Carlos de los Cobos will have his hands full.

Can Brian McBride lead the team without Blanco, will Marco Pappa finally show his true talent for a full season, I think there are as many questions about Chicago than their are answers, but I do think they have enough talent to make the playoffs, the question is can they post a winning record at home this year? in 2009 they were 5-4-6 with a  -1 goal differential, if they can improve on that they could be a contender for the top spot in the East, but unseating the Crew will be no easy task, but getting a playoff spot should be no problem for the boys from Toyota Park.

No major changes to the 2009 Supporter Shield winners,  they did add Herrera a striker from Columbia, but if they are going to repeat they will need to find a way to get Rogers more involved in the offense.  It will be interesting to see if GBS can go for a full season, he struggled at the end of 2009 and the inability to rely on him in the playoffs may have cost the Crew their chance at the MLS Cup.

Eddie Gaven, seemed to rediscover himself last year and could help push this team towards another successful year.  It has been nice to see Columbus get some success with the 2008 MLS Cup win, and the 2009 Supporters Shield and this year should be no different as they are clearly the class of the East, albeit a weak East.