It's time for the MLS season to start

Share All sharing options for: It's time for the MLS season to start

The official MLS name for today is "First Kick", and it starts the opening weekend of MLS action with a matchup of brand new expansion side the Philadelphia Union facing league darling and last years expansion team the Seattle Sounders FC.

So Sounder at Heart is the SB Nation blog that covers all thing Sounders, and Dave offers us up a preview of the match up and while he is quoting somebody as proclaiming that the Sounders will make a run at the MLS treble, one can forgive that type of thing after all it is opening day.  He does offer up some keys to the game and here is #1 on his list:

1 - Freddyain(that's exactly two guys names Fredie) - These two have to play well together. Last season the younger Fredy kept interfering with the older Freddie. This disrupted the attacking flow so that the midfielders didn't know who would be where (sometimes it was both of them). It also meant that the team couldn't capitalize on having one of the 10 most talented players in the league. Ljungberg didn't put up the offensive numbers that he needs to for the Sounders Goals For total to explode.

my thoughts on this matchup are after the jump:

Well if you read my Western Conference preview you know I think Seattle will win the west, and to be honest at home against a brand new team, one has to expect them to get a win in the match tonight.  If you want to take a look at the official game guide it can be found here.

Here are the probable lineups for the match: 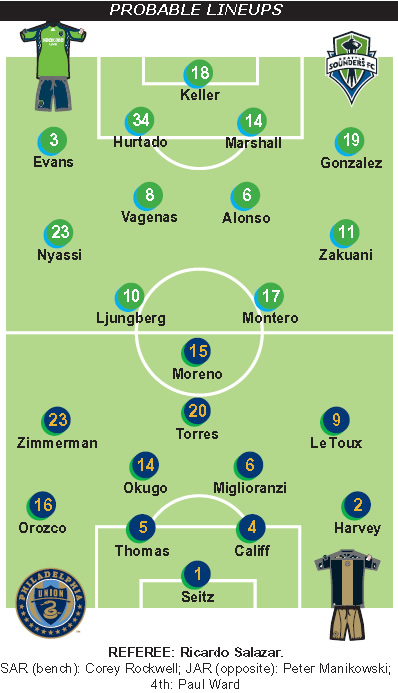 For me the difference in this match will be the experience factor of the Sounders, now there are guys like Harvey, Thomas, and Moreno for the Union with plenty of MLS experience but not together and not in front of the largest MLS fan base.  Having 60 fans out of 32,000 will not help the new kids on the block tonight, I do believe that their defense will keep them in the match.  I like how Shavar Thomas plays, he is a very physical center back and with Danny Califf next to him they should be solid in front of former RSL'er Chris Seitz, but will they know how to deal with the savy of Alonso, Vagenas, and Ljungberg?  How will they deal with the quickness of Nyassi, Zakuani, and Montero?

Nope for me it will be too much for Peter Nowak's side to overcome the lineup and bench that Sigi has, the emotion of their first league match will give them some energy, as will playing in front of a large and loud crowd, but in the end this one will likely end 2-0 with the Sounders starting off their 2010 season in style on national TV.