Well I can look out my hotel window and see the lights of Buck Sham (I mean Shaw) stadium, and I have to imagine that everyone who has ever attended a match at San Jose is incredibly happy about the news that they will soon have a new stadium here.  I know for one that I will be, the atmosphere and fans are great and they deserve much better than this.  Well actually the fans who were used to their team being a champion are still getting used to this version of the quakes, see the team that won championships here in the south bay actually moved to Houston and continued their history of winning championships by getting two more.

The rebirth of the San Jose Earthquakes came in 2008 and since then the side has struggled, just 8 wins in 2008 as they tied with the LA Galaxy as the worst team in the West.  2009 saw they claim that title outright as they were the worst team in the MLS with twice as many losses (14) as wins (7), but they did well against RSL last year by winning at BS stadium 2-1 and earning a 1-1 draw at Rio Tinto Stadium in Sandy.

It is funny in a way that since San Jose came back into the league it has been Real Salt Lake who has to be looked at the most successful team in MLS over the last two years, a playoff run in 2008 that saw them just a goal away from the MLS Cup, and of course it was RSL who lifted the MLS Cup in Seattle to end the 2009 season.  When you look at RSL's record against the reborn disasters, we are 2-1-2, but to be honest I believe that the Real Salt Lake team that will take the pitch in 2010 can ignore those old records.  This my friends it the start of something new.

So the 2010 RSL season is just hours away and I do believe that off of the emotion and confidence of what happened in November 2009, that a new day is about to start for Real Salt Lake.  They have always felt they could compete with anyone at anytime, but now they have the proof that they are as good, no in fact they are better, than anyone in MLS.  If they play with the passion, energy, skill, and heart that they showed at the end of 2009, well then the future is bring indeed for RSL.

It starts today with a real chance to prove something, the old RSL sucks on the road.  So how fitting to show the world that it is a new RSL that will be playing from now on, than to have 4 of your first 5 matches on the road?  If this truely is a new team, they will need to get huge results out of their road matches this year.  That means wins, at least doubling the two of last season, but I believe the key will be draws.  RSL dropped 11 of 15 matches on the road this year, and that number has to come down to much more manageable 7 or 8 if RSL is to meet their goals for 2010.

OK, enough overview my match specific thoughts are after the jump:

A lot of people have made noise about San Jose and their lack of real big moves in the off season, but they did have moves made, gone is Darren Huckerby (retired), Shea Salinas (expansion draft), Simon Elliot (waived), but they did bring in another striker in Brazillian Eduardo and added others via the draft.  But for Frank Yallop, he will look to build on the foundation of Ryan Johnson, Bobby Convey, and Arturo Alvarez, and to be honest that isn't a bad core to build from.  Ryan Johnson was impressive last season with 11 goals and 2 assists, Convey is a bulldog in the midfield, and of the 3 goals the Quakes got against RSL in 2009 "AA" contributed two of them.

So the projected line ups are: 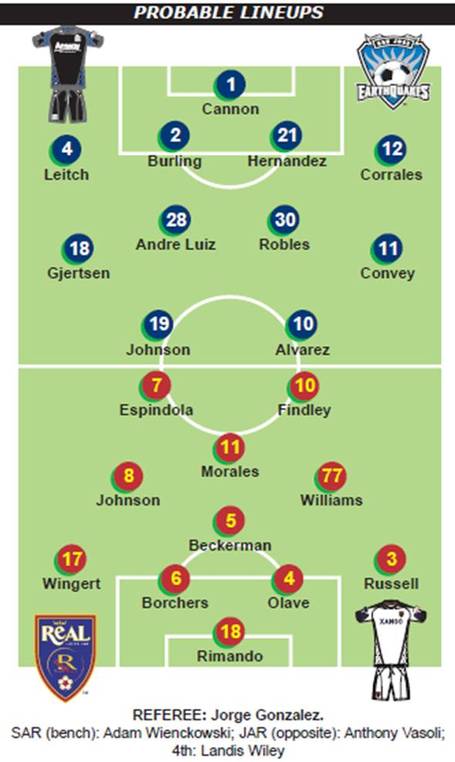 For San Jose the most telling thing is that of the 11 names listed that 3 are brand new and 1 played very limited minutes in 2009.

For Real Salt Lake, 10 of the 11 projected starters were on the pitch at the start of the MLS Cup in November. Gone is Yura Movsisyan who started in the Cup match, but his replacement Fabi in the Cup is now the projected starter, and RSL has new signing Alvaro Saborio who could see action in the match. Gone is Clint Mathis, who filled in for Javier who was injured in the Cup match, but Ned Grabavoy is poised and ready to take over the role Clint played. In fact you might see a familiar thing come from head coach Jason Kreis, he may start Grabavoy in place of Williams, and then bring in Andy later in the match when his creativity and offensive abilities can help RSL close out matches.

For me there are a few really big matchups:

There are a number of wildcards as well:

All of that will end up in an exciting match, the opening show of the FSC doubleheader and the experience and talent of Real Salt Lake will simply be too much for San Jose. The new RSL will pick up their first road win of the season with a 3-1 win over the San Jose Earthquakes.

Other Matches:
I got the Seattle 2-0 win over Philly right including the score, so here are my other predictions for the weekend.

Enjoy the rest of the opening weekend of MLS action.