History says that Real Salt Lake will always their first road match of the year in California, up to now that victory always came at the HDC, but with new 2010 version of RSL it appears that location is no longer an issue.  This marks the 5th win in a row for the Cobalt and Claret going back to the 1-0 win over Columbus in last years playoffs, more impressive is the fact that we have 4 straight wins away from Rio Tinto Stadium.

One had to wonder what type of RSL team would show up in San Jose, the road wasn't nice to RSL last year outside of the playoffs they only won twice and scored just 9 goals away from Rio Tinto.  So when RSL scored in the 14th minute of the match on a great goal from Javier Morales: 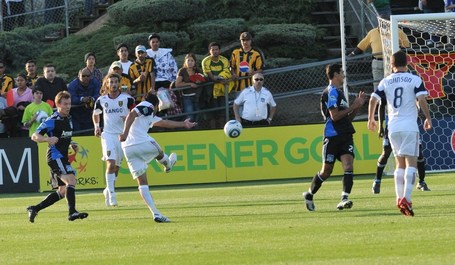 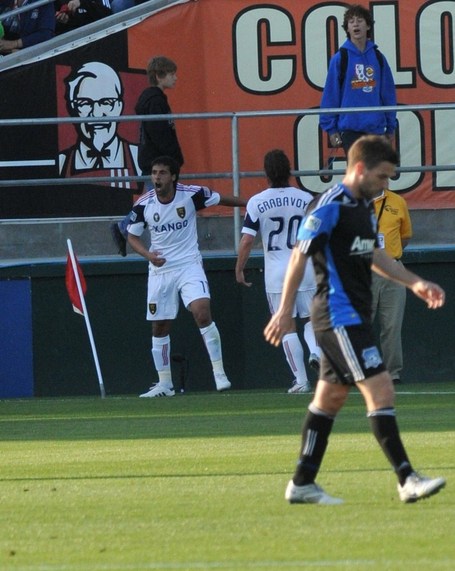 When RSL scores early it usually means very good things, and tonight was no exception.  More on the match after the jump:

San Jose tried to battle back and found themselves really stuck to playing long balls over the top and hoping that Glen or Johnson could get behind Borchers or Olave, a battle that I expect would be one of the important ones in the match.  It was very often too close for comfort: 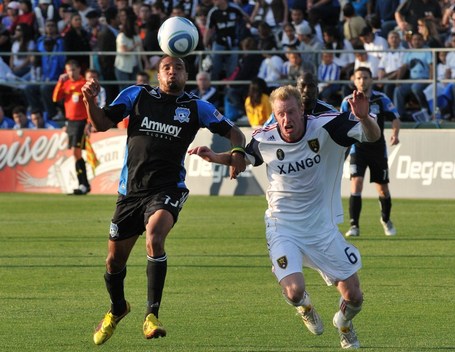 But despite several slips on the very wet and very slick surface, the collective effort of the RSL backline and Nick Rimando were up to the task of preventing the many offensive chances of San Jose (14 shots and 4 on goal) from being too dangerous and nothing that Nick wasn't able to handle.

In the 27th minute it was Fabian Espindola opening up his 2010 account, on a great shot the dipped in time to find the back of the net. 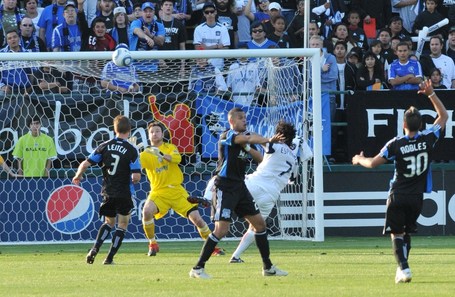 I did find some humor in one defender claiming offsides, another claiming handball, and Joe Cannon is the only who appears to have tried to prevent the goal, he didn't but he tried.

RSL continued the pressure they had applied from the opening minute with often everyone but Rimando playing well in advance, often on the San Jose half of the pitch.  It was an impressive effort and while San Jose had a few chances it really was clear that RSL was the better team on the night.

The second half saw RSL continue to dominate the possession and control the pace of the match, it ended up being too much for Chris Leitch, who in the 52nd minute took down Fabi from behind and since he was the last man on defense it was a straight red card for denying the goal scoring opportunity. 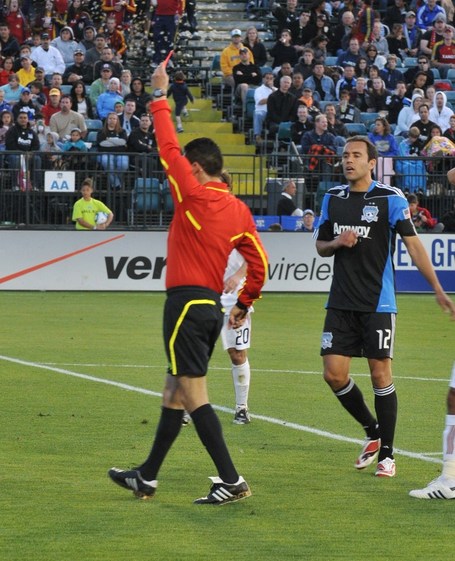 It was just inches out side of the box and Javi lined up for the free kick: 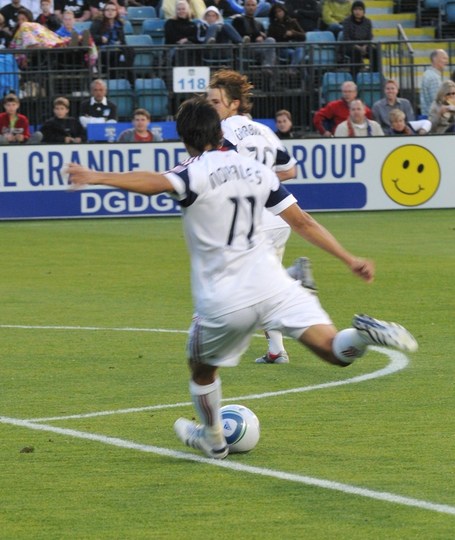 and again he found the back of the net and it was 3-0 RSL and time for another celebration, this time Javi went to his teammates who were behind the goal warming up and he was greeted with open arms and big smiles.

With just 10 men left on the pitch for San Jose, RSL pressed even more as to not get caught resting on their 3 goal lead and man advantage.  Jason did use this as a chance to get some changes made and brought in Andy Williams for Ned Grabavoy in the 62nd minute, Ned was very impressive against his former team.  As that change was getting ready to be made, things got very chippy and I didn't see the play but somehow Nat Borchers ended up with a crimson mask for his efforts: 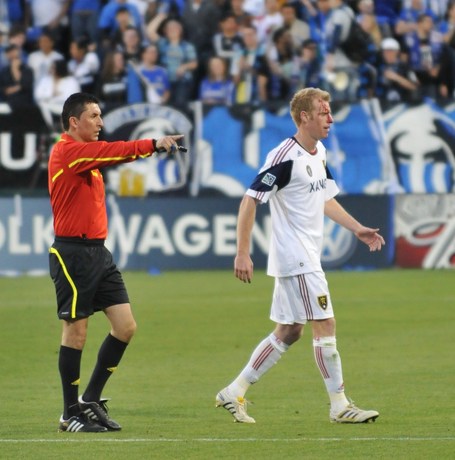 So it was out with Nat as well and the Real Salt Lake debut for Rauwshan McKenzie just a minute after the Williams sub.  RSL started playing a bit more reserved but it was clear that they wanted to get another goal.  In the 72nd minute another player made their Real Salt Lake debut as #15 Alvaro Saborio took the pitch for the first time in a MLS match.

San Jose kept trying to attack and even made Rimando make a couple second half saves, but for RSL there was a scary minute as Olave went down after it appears his foot got caught in the grass.  He would stay on and play as RSL had used all their subs, but you could see him limping as he continued to play.

Alvaro wasted no time in finding his rythm with the team and looking very dangerous creating several very good offensive chances late in the match. 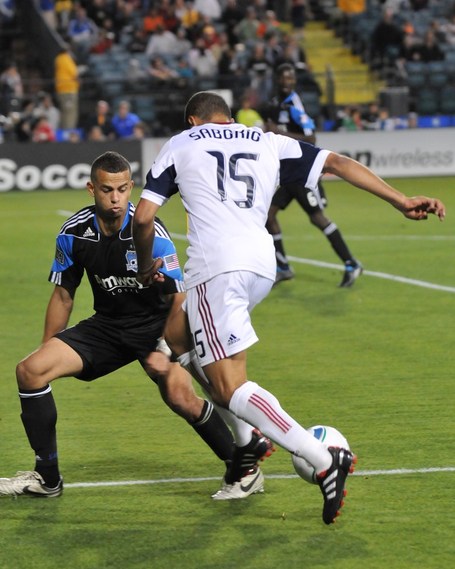 As the final whistle blew it was clear as I thought would happen a decisive RSL win, and an impressive clean sheet on the road for Nick Rimando and the defensive efforts of Real Salt Lake.  You can see more of my pictures from the second half at myrslsoapboxphotos.ning.com

I will do a more complete match review on Monday evening, but for now there are some pictures and thoughts about the very impressive win by RSL over San Jose.