So before the San Jose match last weekend, I talked about a new Real Salt Lake that I thought would emerge this year and you got a first hand look at it in the 3-0 win over San Jose.  However, that performance actually left a lot to be desired from RSL, failure to control the match in the last 30 minutes despite being up a man, failure to adjust before the match for the soft field conditions, and other minor details.

There were some huge highlights as well, the return of Javi "the unstoppable" Morales, who looked like the guy who was a real MVP level player in 2008.  Fabian opened up his account with a incredible shot, in fact you could have nominated all 3 RSL goals as goal of the week candidates, but on the new mlssoccer.com who knows where that is anymore? The debut of two new players as both McKenzie and "Sabo" got into the match and both did well, I have a feeling that unlike some past foreign striker experiments that have been less than impressive, that Saborio might just be the next big thing in MLS.  A nice interview with him was done recently for mlssoccer.com, click here to read it

So this brings us to Houston, here are the probable lineups(which are never right): 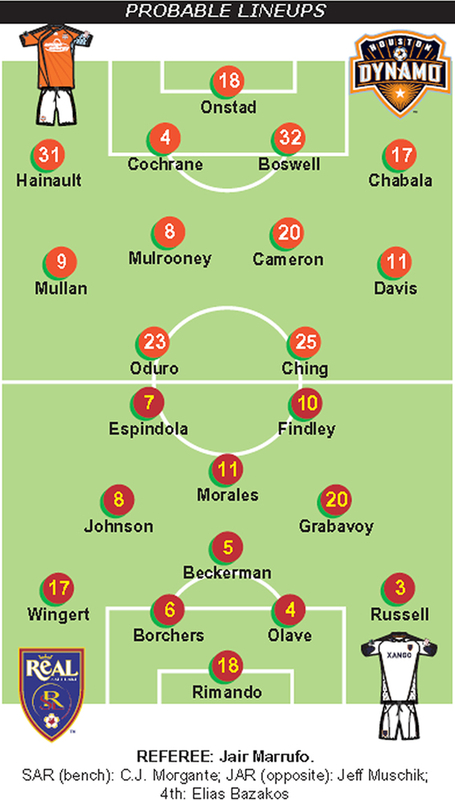 the rest of my match preview after the jump:

For RSL, it is a chance to continue their streak of 1st's that started last weekend, now we can go for our first ever win in Houston (we are 0-5-1 with 16 goals for and 19 against).  We can equal our 2009 number of road wins (2) with a victory, and we could be top of the Western Conference standings for the first time ever in week 2 of the MLS season. If we can keep from getting a red card in that match, that too would be a first in a very long time.

Usually when RSL travels down to H-town the weather is a huge factor but this time the forecast is:

There are some big differences between this years Houston and the team that RSL failed to beat in 2009 (despite 3 attempts), gone are MLS All Stars and USMNT players Stuart Holden and Ricardo Clark, still there is RSL killer Brian Ching who has 4 goals and 2 assists against RSL in 10 matches played.  There was no better defense in MLS in 2009 as the Dynamo allowed just 29 goals and only 13 at home.
This will be the Dynamo home opener, so emotions should be high and the stands should be filled with fans wearing orange, in fact they are asking everyone in the town to wear orange but it looks like there are still a good number of seats available for the match.
Key Matchups:
Wildcard- so things you wouldn't normally look for but they could be the difference makers in the match:
This is match a show of a up and coming team, and one looking to hold on to the prestige of past.  RSL has made two straight conference finals, while Houston has made it to none.  Houston has won back to back Championships, RSL is looking to do that.  Houston has 8 players 30 years old or older, while RSL has just 4.  Houston has finished at the in the top 2 in the West every year since RSL joined the league, and RSL hasn't ever finished higher than 4th, and Houston has two MLS Cup titles since RSL joined the league, while RSL is enjoying their first.
It is clear that Houston has the history of a top franchise in the league, something RSL clearly wants to become, but for RSL it is a matter of taking it, because I see no sign of Houston or anyone else stepping aside and letting them by.  RSL will be looking to prove something again in this match, to prove that they are worthy of being considered an elite team in MLS, to do that they need to get a result against Houston.
That is exactly what they are going to do, while getting a win might be tough I do think this one could end up a 1-1 draw and my over/under on cards is 5 and ejections is 1.
LA Galaxy vs. Chivas USA
Always a battle match, but I just don't see Chivas being being able to get a result in this one.  2-1 Galaxy.
OFF MY SOAPBOX