Which company has done the best job with World Cup kits?

Share All sharing options for: Which company has done the best job with World Cup kits?

24 of the 32 teams in the World Cup will be wearing kits from either Adidas, Nike, or Puma. I have been critical of the Adidas effort in MLS, too much cookie cutter for me, I am not a huge fan of the Nike USMNT kits, but I thought their green efforts were very cool.

This is a huge business with over 10 billion dollars in annual sales, Adidas has been the leader for as long as most can remember, but Nike has stepped up their efforts and is taking a bigger and bigger chunk of the pie. How important is this segment of the market, well Nike paid a reported $64 million dollars a year to be the official kit of the French National team from 2011 to 2018. That is four times what Adidas was paying.

The article in the Oregonian quotes a NPD analyst as saying if the US makes it to the semi finals, 1 in 10 could purchase a team shirt, that is 30 million shirts sold in less than 3 months.

So I thought I would put it up to a vote, which company did the best job on World Cup kits?

Images are from worldsoccershop.com (which is offering all of the following for purchase)

Here are the Adidas offerings: 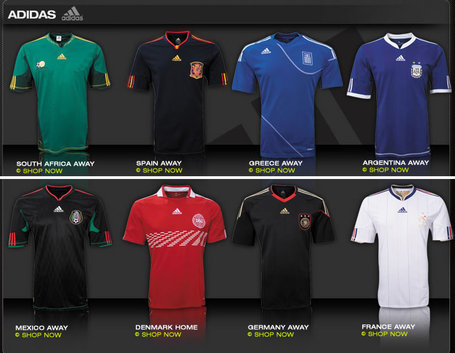 Nike and Puma after the jump: 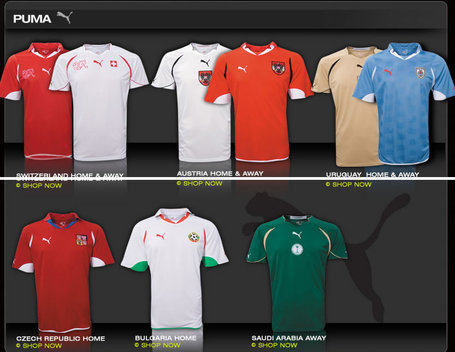 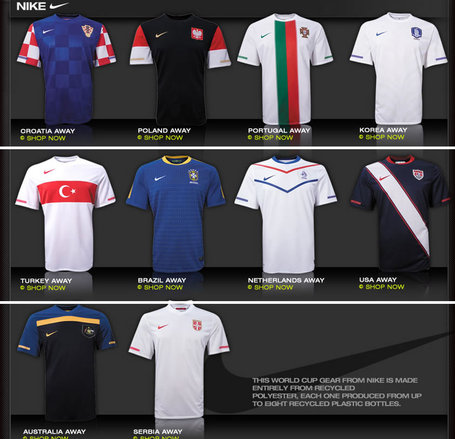 I am not sure why but Nike's Slovenia away kit wasn't there but it clearly is an homage to Charlie Brown: 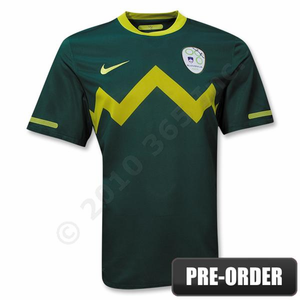 So cast your vote, let your voice be heard.