Well folks it didn't end quite the way I thought but RSL extended their home unbeaten streak to 14 matches on a late goal by newcomer Alvaro Saborio.  Saborio came on in the 77th minute for Robbie Findley and gave the offense a different look, it was enough to put in a Nelson Gonzales corner kick to get RSL a share of the points.

While RSL controlled the possession early, it was Seattle that found the back of the net first as Steve Zakuani was left open by the RSL defense and once he got behind them, he was able to beat Rimando for the first goal of the match. 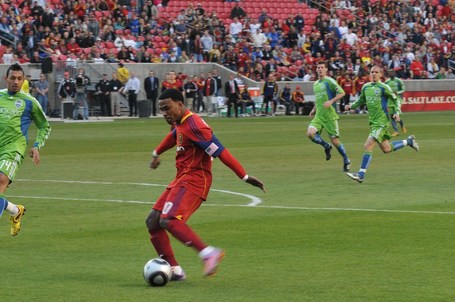 It was some fine network by Kasey Keller that the match going the Sounders way in the first half, RSL had a couple of good chances but controlling the match and possessing the ball wasn't enough to overcome the 1-0 Sounder advantage.  Just a note Javier Morales was taken out in the 39th minute with a groin injury and will see the doctor for a MRI to see if any damage was done.  Just minutes after that a hard challenge on a 50-50 ball left Neb Grabavoy wobbling and he would be unable to come out for the second half. 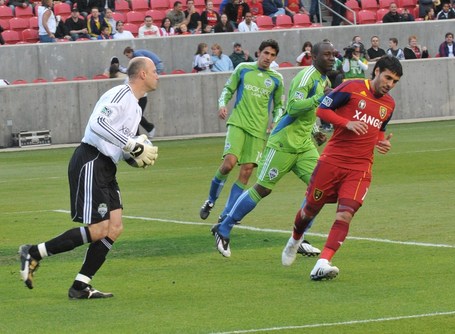 I think RSL played with perhaps too much energy in the early minutes of the first half, as prematch festivities of getting their Championship rings, the raising of the Championship flag, and a very loud crowd of over 19,000 people.  It seemed like a lot of their early passes were a bit long, and everyone seemed to be playing a bit franticly early on.

2nd half and more pictures after the jump:

So let start by telling you the interesting story of my trip to the match, I was running late and as I went to go catch my train down to the stadium I ran into a half dozen or so Sounders fans who were also heading that way.  Well it seems the few I ran into were just the advance party for a swarm go green and blue clad visitors from the Pacific Northwest. 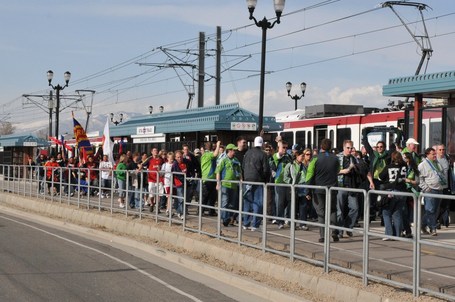 It just so happened that the number grew to 50-60 Sounders fans singing and cheering (too much jumping for me) in the train car I was in, as we arrived at Sandy it was interesting to not that about 30-40 members of La Barra Real had been two cars back from us.  It was a great site to see passionate fun loving fans from both teams arriving to support their teams.

Much like the last time RSL played in Seattle, a injury to Morales forces a 1st half change and then Ned Grabavoy, who was a monster in the first half, had to be replaced as well.  This meant that the RSL midfield was now Nelson Gonzalez, Kyle Beckerman, Andy Williams, and Will Johnson. 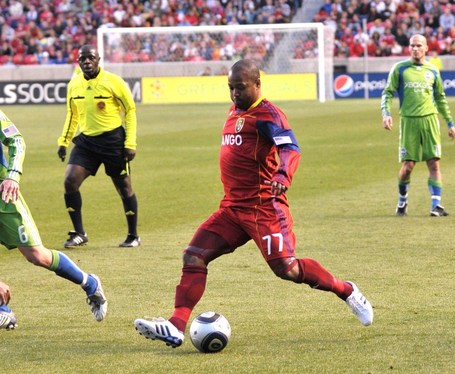 It would be a throw in that saw Findley play the ball back to Russell, who played it into the box and found the head of a diving Will Johnson who put it past Keller and tied the match up at 1-1 in the 53rd minute of the match. 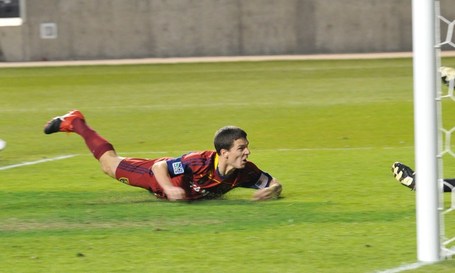 Will Johnson watches his ball get by Kasey Keller

It was a battle until the 72nd minute when Marshall found himself on the end of a set piece provided by Freddy Ljungberg, which gave Seattle a 2-1 lead.  RSL almost tied the match back up as a great ball by Espindola found the head of Saborio but it was simply a matter of inches wide and Will Johnson was unable to get a foot on it to poke it in.  Then a few minutes later Robbie Russell powered a shot that Keller wax able to hold on to, that again kept the score in the Sounders favor as the clock hit 85 minutes.

I have to say I was very, very impressed with the play of Fabian Espindola, he created some huge chances for RSL and seemed to play well with Nelson Gonzalez (who was a bulldog and very creative). 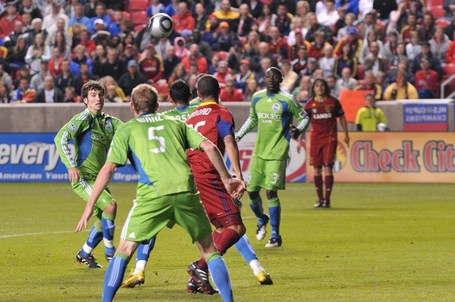 Fabi plays a dangerous ball into the area for Saborio

Real Salt Lake would control the last part of the match and they created a number of chances but the Sounders defense was able to defend their goal well on a number of dangerous balls played into the area. 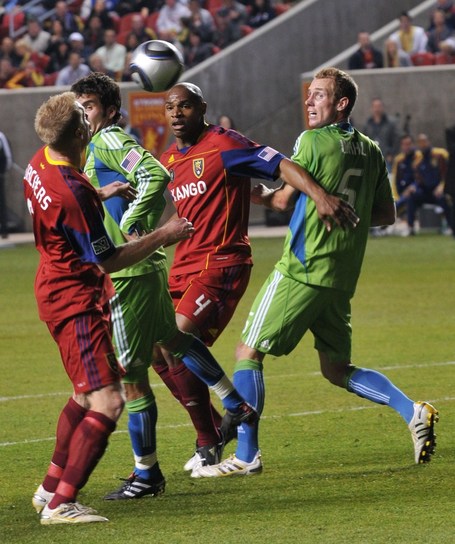 Nat and Olave battle for a ball in the box 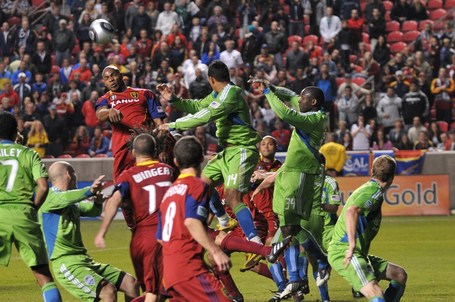 and it ends up in a 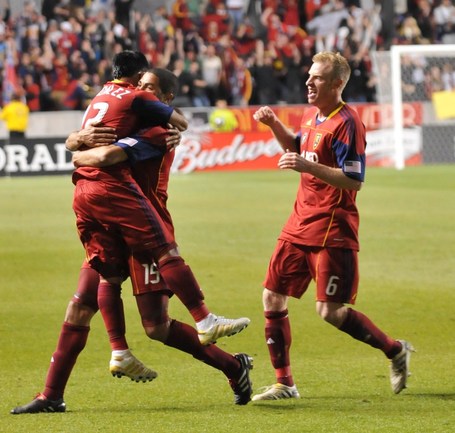 Celebration for Gonzalez and Saborio

It was clear that RSL was the better team, but unfortunate mistakes cost them a win.  However to come back in the final seconds and snatch a result from a defeat has to remind them that there is magic at Rio Tinto.

The final score was 2-2 as both sides battled and did what was needed to get a result.  I also have to give a huge shout out to the 150 or so Sounders fans that made the trip and were some of the best visiting fans I have ever seen at Rio Tinto, they simply were stellar. 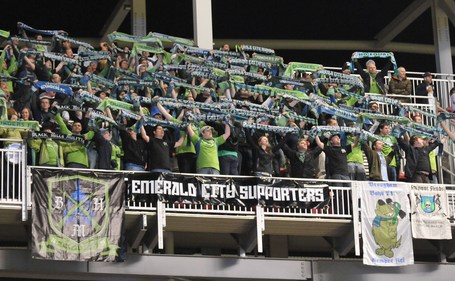