Share All sharing options for: For Real Salt Lake it is only a matter of time (before they show their yellow side)

Now don't go thinking anything other than the color of our 3rd jersey, but lets start with this, earlier this week the Seattle Sounders unveiled their 3rd jersey, for CONCACAF and US Open Cup matches, and the impact it had was shocking: 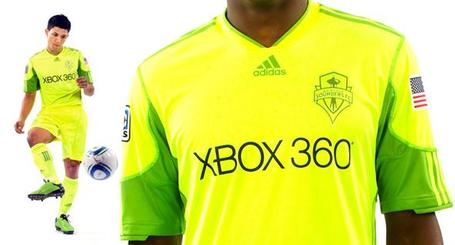 via www.soundersfc.com (this actually doesn't do it justice from what I hear, one would have to imagine the color of a yellow highlighter).  The official color is ELECTRICITY YELLOW and you can pick one up from the Sounders Pro Store for just $90 dollars, or wait until they are at Ross or TJ Maxx for $20 in a couple months.

Speaking of the Sounders let me jump in here with my match preview of their Thursday tilt at TC Dallas:

Well a week after losing points in the last seconds of a match, Seattle turned the tables on KC and with a goal in 90th minute and got a win.  Meanwhile FC Dallas headed to Red Bull Arena and the harsh reality is they got robbed, they played well but it was some incredible keeping by Bouna Coundoul who ended up with 7 saves that handed Dallas their first loss of the year.

I actually expect good things from FC Dallas this year, they have some good talent and I have been impressed with Jair Benitez, when combined with Heath Pearce you end up with a fairly lethal attacking force, both seem to be able to cross the ball well.  It will now come down to can Jeff Cunningham become the scoring force he was last year and can Dallas get some revenge against the team that knocked them out of the playoff race at the end of 2009?

Seattle is a rock solid team that should be at the top of West, they rebounded well from the draw against RSL to get a late win against KC.  They dominated most of that match, so getting the result was a just reward for the Sounders, but now they have to travel down to Dallas a place where last year they got a draw against a FC Dallas team that was struggling.  The key to the match may be if Seattle can stop the set pieces of FC Dallas, 2 of their 3 goals allowed this year have come off corner pieces, so caution on corners will be a big key to the match.  I look for the Sounders to control most of the possession in this match and I believe we will see them get a 2-1 win.

After the jump you will get your first look at the 2010 RSL third kit:

Well a couple years ago RSL broke out a practice jersey that was yellow, and while we can't match the "stunning" kit of the Sounders, we did go back with yellow kit: 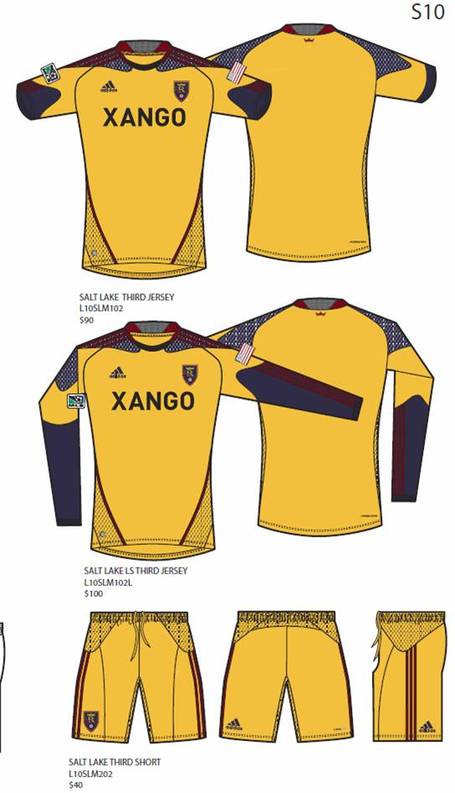 I am sure the final version will be slightly different but I for one am a bit disappointed, there is some rule in CONCACAF about each team bringing two jerseys to a match that would be different than the home jersey of the team they are playing. I am fairly sure that with this one will help us meet that requirement.

The upside is that it isn't ELECTRIC YELLOW.