So if you have been reading my blog for any time you know I love to look at how the numbers line up for RSL, the best way to do that is to compare this year to the past years and while it is hard to be fair to RSL given their 4 of 5 on the road start, some things are telling.  First up lets take a look at points: 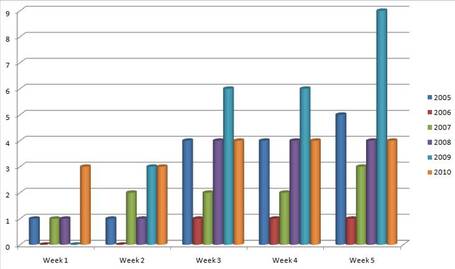 It is important to remember that in 2009 RSL had 3 home matches our of their first 5, in 2010 we have had 1, but now we have 4 of 5 at home, so after 10 matches last year RSL had 11 points with an even spread of 5 at home and 5 on the road.  To equal last years total RSL will need 7 points from their next 5 matches, I believe they are very likely to get at least 9 points, if not more in May.

Some more numbers after the jump:

So what about goals for and goals against? So first up is goals for, it is important to remember that RSL had two huge matches early in 2009 4-1 over the Crew in week 2 and the monster 6-0 win over New England in week 5, so as you can see RSL is clearly behind on goals scored when compared to last year, but their 7 goals scored is tied with their 2008 total for second place: 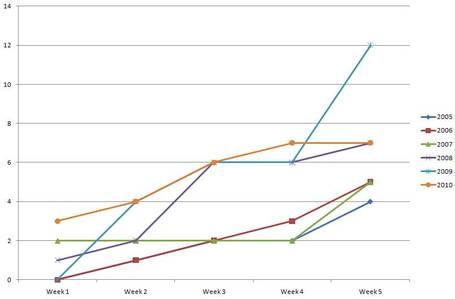 So next up is goals allowed and as you can see RSL has struggled a bit here as well but have allowed just one more goal than they had in 2009, despite again that rough 4 of 5 matches on the road start.

While all the numbers are important it is still early in the year and the reality is that things will change a lot for RSL as the most dominant home team of 2009 now get to play 4 of their next 5, and 7 or their next 9 at home.  That means that of the next 27 possible points, 21 of them will be determined at Rio Tinto Stadium.  The good news for fans is it all starts on Saturday.

Yes next up for RSL is Toronto FC, and one should remember that the key will be dealing with DeRo.  He has 5 of the 6 goals TFC have scored this year, for RSL the key will be getting back on the scoreboard after a couple weeks of goose eggs.  Lucky for us that TFC have allowed 10 goals already this year as their defense has really seemed to struggle.