So I may have some issues with the design and lack of creativity, I do give full credit to Nike for a number of things announced today as they unveiled the new US Mens Home Kit.  First, keeping the DTOM theme going, I thank you very much it makes my choice in tattoos a more valid one.  Second, the fact that this jersey is made of 100% recycled materials is incredible.

BEAVERTON, OR. (April 29, 2010) - Nike Inc, (NKE) today unveiled the new United States Men's National Soccer Team home kit which draws inspiration from the team's most famous victory over England and is the most environmentally-friendly, technologically-advanced kit in our history.

The new home jersey is white with an obsidian blue round-neck collar and a tonal grey sash across the front, which echoes the design of the U.S. Men's National Team kit wore to defeat England sixty years ago. The jersey's back neck features a graphic that reads ‘USA', while inside is a graphic of a coiled rattlesnake. Symbolically placed above the heart on the back of U.S. Soccer Federation's crest inside the jersey is a coiled rattlesnake accompanied by the defiant and inspiring message ‘DTOM', which stands for ‘Don't Tread On Me.' This phrase has been used for more than two centuries in the United States, first by the colonies as a warning against the occupying English, and then featured on the Gadsen flag at the formation of the US Navy. In recent years both the US Marines and the U.S. Men's National Team have used it as a patriotic rallying call. 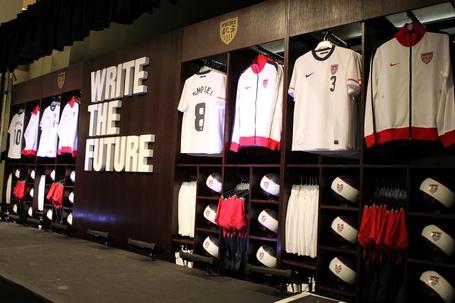 More after the Jump:

The numbers on the back of the jersey are inspired by the famously bold and recognizable numerals used throughout collegiate and professional sports in the USA.

For the first time ever the jersey is made entirely from recycled polyester, and each top is directly produced from up to eight plastic water bottles. In addition, the kits have also been designed to enhance players' performance by keeping them drier, cooler and more comfortable. Improved Nike Dri-FIT fabric is 13% lighter than previous Nike kits and helps to quickly evaporate moisture and keep players dry, while the innovative ventilation zones along each side of the jersey and below the waistband on the shorts significantly increases air penetration to keep players cool.

The home shorts are white rather than the usual blue to give the kit an overall bolder and cleaner appearance and features a varsity red stripe along each side. On the back of the waistband is a graphic containing a series of red, white and blue stars. The home socks are white with ‘USA' on the back of each calf and an obsidian blue ergonomic band emphasizes the calf and leg muscles.

The new away jersey retains the same distinctive details as the home version, but is obsidian blue with a red modern round-neck collar, and a white sash with red trim across the front, which echoes the design of the jersey the USMNT, wore to defeat England in 1950.

The home jersey will be available May 1st at Niketown stores, www.nike.com and soccer specialty stores everywhere.