Real Salt Lake by the numbers

Share All sharing options for: Real Salt Lake by the numbers

So I am not a major stats geek, like some people out there but I have found over the last couple years that looking at the high level numbers (points, goals for, and goals against) and provide fans with some great insight as to where RSL is and where they are likely heading.  I also take a look at the percentage chance RSL will make the playoffs, I use the numbers from the sportsclubstats.com site.  They use a lot of math to figure things out, and I will start this week with their look at the early MLS season: 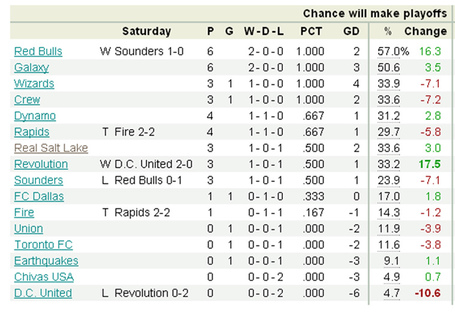 More numbers and stats after the jump (including how he comes up with these amazing numbers):

So here is the explanation behind the Sportsclubstats.com numbers:

Sports Club Stats calculates each team's odds of making the playoffs, how each upcoming game will impact those odds, and how well they have to finish out to have a shot. It knows the season schedule and scores for past games. Each night it grabs any new scores from the internet and simulates the rest of the season by randomly picking scores for each remaining game. The weighted method takes the opponents record and home field advantage into account when randomly picking scores, so the better team is more likely to win. The 50/50 method gives each opponent an equal chance of winning each game. Both methods let an appropriate percent of games end in a tie or go into overtime in leagues where that matters. When it's finished "playing" all the remaining games it applies the league's tie breaking rules to see where everyone finished. It repeats this random playing out of the season million of times (try it yourself), keeping track of how many "seasons" each team finishes where. Finally it updates this page with the new results for you to read with your morning coffee.

To help flush out each team's highest and lowest possible seeds, I force them to win or lose all their remaining games for a small percentage of the simulation runs. All the change columns are since the end of the last day that had games. The biggest movers up and down are in bold. The teams are ordered by their odds of making the playoffs (more interesting than their record) except on the league wide page of leagues that have conferences. Those are sorted by winning percentage. Click on a team to see its big games and what if scenarios.

Chance will make playoffs: This is what we care about. Out of the millions of simulated seasons they made the playoffs this percentage of the time.

There are more number on the site and I highly recommend checking it out.  They do all the sports including the World Cup and EPL.

So what about the RSL specific number?

Well let's first look at the number that matters in the end, points: 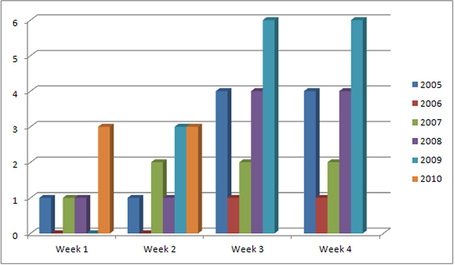 As you can see in week 2 RSL has never had more than 3 points and that trend continues in 2010, it could be the fact that until this year we had never won our opening match of the year.  Well in looking at the numbers for week 3 you can tell that RSL won in weeks 2 and 3, both at home.  With just one home match in their first 5 this year, RSL will need to pick up a win on Saturday to stay equal with 2009's start. 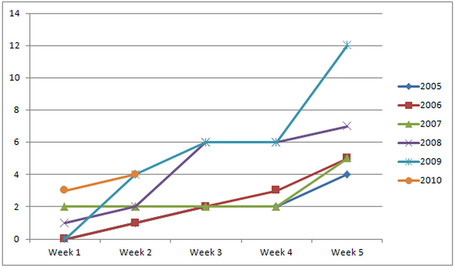 Well RSL has started off quickly this year, but are facing two huge offensive matches, with a 4 goal match in week 2 of last year and a 6 goal outburst in week 5.  RSL set a blistering pace for goals early in the season and ended with 43 goals for a level only matched during the 2006 Golden Boot season of Jeff Cunningham. 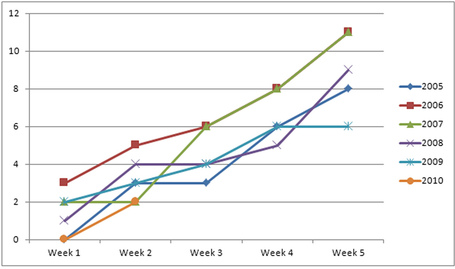 In 2009 RSL set a new team record by allowing only 35 goals against, which was an improvement of 4 from the 2008 season.  So far with only two allowed (none in the run of play), RSL looks like it will try to lower that total again in 2010.

OK, that is a high level look at some of the numbers.