For RSL's Robbie Findley it is the month of a lifetime

Share All sharing options for: For RSL's Robbie Findley it is the month of a lifetime

You have Robbie coming off a great 2009, he was the leading scorer for Real Salt Lake, in the top 5 scorers in MLS, his team won MLS Cup.  Then you hit 2010 with callups to the USMNT camp twice, and action in every US match so far this year, and now the 2010 MLS season has started and for the first time in franchise history RSL won their opening match and they followed it up with a quality showing in Houston.

Well Robbie may not be sporting Air Jordans on the pitch he does have a new pair of shoes (if you watched the Man U vs. Bayern Munich match you saw Franck Ribery with the same ones): 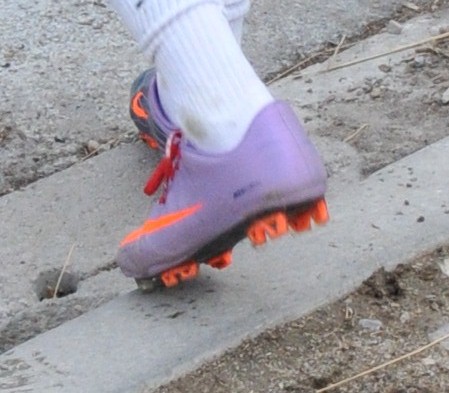 Those are the Nike Mercurial Vapor Superfly II FG's in Violet Pop/Total Orange/Dark Obsidian to be exact.  But I don't believe it is the shoes that will make the next 4 weeks perhaps the biggest in Robbie Findley's soccer career, and maybe his life.

The reason is after the jump:

In 4 weeks Bob Bradley will announce the players eligible for his World Cup team and Robbie is on the bubble in most experts opinions.  So Robbie will need to likely have a good month to keep his name on the tongue tips of the pundits and talking heads around soccer, right now a lot of those people are talking about Hercules Gomez, who is playing well in Mexico, and Edson Buddle, who has scored all 3 goals for the LA Galaxy this season and plays with a USMNT stable Landon Donovan.

So there is a lot of pressure on Robbie, he is in a contract year, and based on last years performance you have to believe that his agent is getting interest from a number of teams in Europe and around the world.  Should Robbie make the World Cup roster, that adds a lot of exposure around the world and that would likely mean more money.  If Robbie makes the squad and gets to start and play in some matches, even more exposure and money are at stake, and if Robbie should have a breakout match or tournament, well as Kuper and Szymanski state in their book Soccernomics:

The worst time to buy a player is in the summer when he's just done well in a big tournament.  Everyone in the transfer market has seen how good the player is.

and while they point out that this usually overvalues players, the reality is it still happens and in the case of Robbie Findley, it could be a huge financial windfall.

So all of this adds a lot of pressure to a young man who is simply trying to do his job, it was the first RSL home match of 2009 that saw Robbie score a hat-trick against the 2008 MLS Cup Champions Columbus and that jump started a great year for Robbie.  He ended the year with 12 regular season goals and 3 more in the playoffs. It is interesting to note that half of Robbie's goals came when he was in the starting 11, the other half came when he came in later in matches to give RSL an offensive boost.

With the deadline to name his eligible players (not his final roster) next month, it is time for Robbie to show that he has is just the right player to bring to South Africa.  There will be no better time for him to do that, than Saturday against a very good Seattle Sounders team.

My hope is that Robbie breaks out even more than last year, he has all the talent to win the MLS Golden Boot, to be a part of the 2010 World Cup US team, oh and since we are locking up players (congrats to Kyle on his new deal), can someone get Robbie a new deal and let's keep him around for another 4 years and several more MLS Cups.