Well it is less than 24 hours until the festivities at Rio Tinto Stadium will start and the 2010 Real Salt Lake home season will begin. It seems a bit like kismet that RSL will face the Sounders, who was their opponent in their first match in 2009, and the team that plays at Qwest field where RSL ended their season in the MLS Cup.  Last year about 150 fans from Salt Lake made the trip up to Seattle and this year it sounds like just as many will be making the trip from Seattle to Salt Lake.

If you asked most experts who the top 3 teams in the Western Conference would be in 2010, most would have both Real Salt Lake and Seattle listed.  The teams faced off twice in MLS action last year with the home team winning each match and the visiting team failing to score a goal.  Both teams have 1-1-0 record and both have scored twice as many goals as they have allowed, both teams lost last weekend after both teams won their opening matches.

The similarities don't stop there, the RSL starting lineup is almost the same as it was in the final match of 2009 and the same can be said for the Sounders.  Both teams have solid defenses, and explosive offenses, Seattle ended the 2009 season with a +9 goal differential, while RSL ended with a +8, both were dominant at home, Seattle lost twice and RSL only once.

Instead of the traditional look at the probable lineups from the RSL match guide, I will be using a new format created by Dave and his crew at Sounder at Heart: 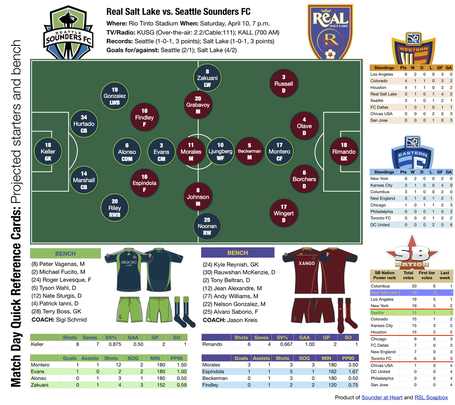 Click the image for a larger copy. (Updated with latest Seattle travel roster)

The rest of my match preview after the jump:

For Real Salt Lake there is no place like home, in both 2008 and 2009 they lost just a single home match all season.  In fact it has been almost 11 months since the KC Wizards managed a 2-0 win over RSL.  Last year RSL faced off against the Columbus Crew in their home opener and beat them soundly 4-1, with Robbie Findley getting a hat trick.

The weather should be perfect as the forecast is for the mid 60's and mostly sunny, and with a huge list of pre-match festivities it may be hard for the players to stay focused, the pitch looked almost perfect today so once the match starts it should be game on.

Olave and Borchers vs. Freddyain (the nickname for their two Freddy's) -

Coming off a match were a foul and a questionable foul both went against Olave inside the box allowing Houston to convert two PK's last weekend, it will be a huge issue to see if Jamison can regather himself and prepare for Montero and Ljungberg?  Of course the upside is that he will have "Mr. Consistency" Nat Borchers next to him and both will be pushed to the limits by the danger posed by the Fred's, who both are allowed to roam around and try to create chances.  Montero has been involved in both of Seattle's goals in 2010 with a goal and an assist, that assist helped Brad Evans score Seattle's other goal.

Fabi has been active in both of RSL's matches with a goal and an assist, but  in a midweek scrimmage against BYU, he simply dominated.  He will cause headaches for any defense but when matching up against James Riley, it is a matter of focus.  We saw Espindola get frustrated at the end of the Houston match, and it happened a number of times last year.  Riley is also a bit of a hothead, he has been ejected 5 times in the last two seasons, including in the playoffs last year.  If Espindola can keep his cool and force mistakes by Riley, he could be the game changer in this one.

To me this is simply the key to the match, if the Javi who played so dominating in San Jose, and was rock solid in the first half against Houston shows up, well Seattle could be in trouble.  If he allows the bulldog Alonso to frustrate him, it could be enough to really disrupt the RSL offense.  Osvaldo is a guy who reminds me a lot of Kyle Beckerman, he is everywhere and never stops, he fights for every lose of 50-50 ball, he will take a shot now and again and is accurate enough to make you always pay attention to where he is.  This battle in the midfield is really the key to the match for me.

Steve Zakuani - Speed, scoring, and sneakiness are the traits that the first pick in the 2009 Draft brought to Seattle last year, he finished the year with 4 goals and 4 assists. So far this year he only has one assist but he is very dangerous and it will be interesting to see how the RSL backline look to control him when he has the ball.  Keeping him from getting behind you, may be the only way to defend this kid.

Robbie Findley - While it is hard to list the leading scorer for RSL as a wildcard, last week he was relegated to come from the bench and provide an offensive spark late in the match.  A strategy that worked so well in 2009, when half of Robbie's goals came from the bench.  I list him as a wildcard because I believe we will see him in the starting 11 as RSL will look to capitalize on his speed early as RSL will look to dominate from the first whistle.

Emotion - 20 plus minutes of prematch activities including skydivers, the raising of the MLS Cup Championship banner, presentation of their Championship rings, thousands of streamers, and then a soccer match against a top notch opponent.  It will be important that Jason Kreis keeps the players focused early, I am sure Seattle will be looking to jump out to a quick start.

So after a week of the official making a huge difference in the match, RSL and Seattle will be under the watchful eye of Abbey Okulaja, in his 91 matches as the head official he has issued 14 red cards (about 1 every 6 matches) and pointed to the penalty spot 23 times (about once every 4 matches).  I am hoping that the official will simply call the match fairly for both teams and allow the play on the pitch to determine the outcome.

It is a bit interesting to see that Ljungberg is listed with a lower back contusion but it isn't expected to keep him out of the match, but it could limit both his effectiveness and how long he plays.  I watched the Sounders lose to New York last weekend, and while they were the better team, they couldn't find a way to find the back of the net.  When facing RSL it will be tougher, as the home team will look to control both, the pace of the match and maintain possession of the ball.

This match along with the LA @ Houston match will go a long way to providing a clearer picture of how the West may look at the end of the season.  I have a lot of respect for the Sounders, but RSL at home is as much of a sure bet as there is in all of MLS.

This one ends 3-1 RSL in a very entertaining match that will set the tone for every other team to take notice that at home or on the road, this year Real Salt Lake is for real.