I think that this may have been the best first 30 minutes RSL has ever played.  They came out with huge energy and attacked from the first whistle, 7 shots in the first 30 minutes to Houston's 1.  Impressive energy from the entire roster and when Robbie Findley scored in just the 3rd minute of the match, the just under 13,000 fans exploded in cheers. What a way to head to the USMNT camp, to get a solid performance in and to get your first goal of the 2010 season and a confident Robbie Findley could be a very good thing for Bob Bradley.

You can tell by the look in his face how much this goal meant to Robbie: 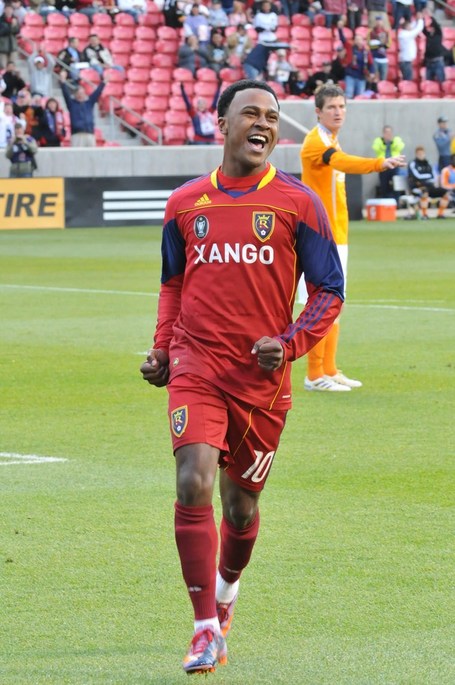 RSL didn't rest on their early goal, they kept up great pressure playing most of the first 30 minutes on the Houston half of the pitch, Saborio would head a great shot on goal only to have it saved.  Robbie Russell fired a cannon shot from distance that was just over the top of the goal, then Saborio would fire another shot in the 24th minutes and he would as you can see: 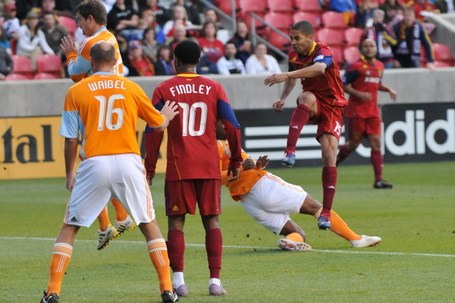 watch it go past Onstad and into the back of the net.  It was that kind of a night as RSL at the half had 8 shots to Houston's 3, RSL had 4 on goal to Houston's 1, and RSL had 2 on the scoreboard to Houston's 0.

The second half saw Houston try to play a more aggressive and attacking style, the brought in Danny Cruz for Lovel Palmer at the half, it wouldn't help as RSL's first shot of the second half was another Saborio goal (both had Javier Morales Assists) and after it was 3-0 there was nothing Houston could do.  They brought on Brian Ching for Waibel as they sought to get more offense going, it worked as all 4 of their second half shots came after Ching entered the match.

In the 72nd minute Houston looked to try to make it respectable and took advantage of a slip by Robbie Russell to get a quality shot off by Brian Mullan that found the back of the net to make it 3-1.  RSL would manage to get more quality chances but to many it seemed like the calls simply were going against them in an unbalanced way but RSL was able to hold on and claim their 3rd straight win, their 9th point of May and move themselves into 2nd place in the Western Conference.

Overall it was a quality match for RSL, who did seem to take their foot off the pedal after their 3 goal, but they were able to finish off the match and now will relax for a few days as they prep for next weekends huge match against Chivas USA.