Share All sharing options for: The most important soccer match this weekend isn't the Champions League final 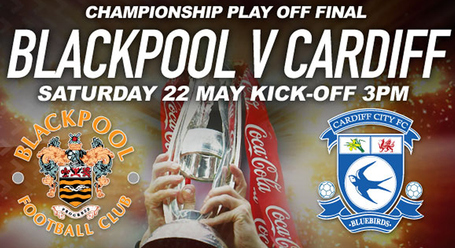 OK, that is a strong opinion but I can say that I honestly believe that while the Champions League final will be a great match (going to pick Bayern Munich to win), and while I always think Real Salt Lake matches are huge.  There is only one match that could mean the difference between financial ruin and playing at the highest level in the world.  It will take place on a grand stage of Wembley, as Blackpool and Cardiff City face off in the Championship playoff to see which team will take their place next year in the premiership.

How important is this match?  Well here is just one aspect of the importance:

"In financial terms, this match offers the winning club the most substantial prize in world football and the value is now even greater as a result of the Premier League's increased revenues from international broadcast rights and the proposals to extend parachute payments over four seasons. It is a prize which provides the opportunity for sound investment and strengthening the foundations of a club for years to come."
from Paul Rawnsley, director of the Sports Business Group at Deloitte via sports-city.org

But there is so much more at stake for these two teams, Blackpool haven't played in the premiership since 1971, and for Cardiff City it has been even longer, 10 years longer in fact as the Bluebirds last played at England's top level in 1961.  It isn't the first time that Cardiff City have played in a huge match at Wembley, just two years ago they found themselves battling for the FA Cup title against Portsmouth (details here and here) and the heartbreaking 1-0 loss still pains their fans to this day.

More on this important match after the jump:

I can't claim to be an expert on either team, but I have to say I love the system of relegation and promotion, and while I don't believe it will ever take hold in the US, it is one of the best stories in world football.  For every team that goes down, there are teams that come up.  This year the three sides leaving the EPL are Burnley, Hull City, and Portsmouth, and the top two teams in the Championship (the level below the EPL) are promoted (this year it is Newcastle United, and West Brom).  It is how the final promotion slot is filled that I love, they take teams 3-6 and have them face off in a home and home to determine the final two who will fight it out on neutral turf to see who will claim the spot.

So there are a number of things you can read online that will help you understand this matchup more:

story from the US version of yahoo

The match preview from the BBC

I can offer up just these couple things, to know that a team is just days away from tax bills that could cause the club to be put into administration, to know that 6 million pounds could buy you 49% of the club just weeks ago, knowing that Cardiff City could be playing host to the top teams in their new stadium which opened this year, and having a friend/co-worker who is as passionate about his Bluebirds as I am about Real Salt Lake.  Makes me a Cardiff fan, to not be one would be too hard in a match like this.

Here are his words about the match:

This truly is the biggest game of my supporting life and the biggest of Cardiff City's for over 50 years. I have been supporting the Bluebirds for 20 years and have been to over 75 league grounds following them around the country. I have seen us relegated in front of a few thousand fans, lose at faraway places such as Carlisle and bore draws at Port Vale, so to go to Wembley and be 90 minutes away from the biggest and most lucrative league in the world is incredible.

My whole family will be going to the game (Mum, Dad and Brother) and it is going to be an amazing experience, but very nerve wrecking as so much hinges on this game. After we beat Leicester in the semi's I was sat on my sofa (I could not go to the game, as I was recovering from an operation) blubbing my eyes out like a baby...why and how does this affect me so much ? It is because football and Cardiff city is a huge part of my life and my family, it is going to games for years with my Dad and brother and feeling the energy of the faithful fans cheering the team to victory.

Sleeping tonight is going to be hard...On Sunday morning, we will wall wake up knowing we will be playing either Leeds United, Nottingham Forest and Crystal Palace OR Man U, Liverpool and Tottenham - THAT IS HUGE!!!

Good luck to all Bluebirds and let's hope (no lets pray) that this result goes our way, because I cannot actually contemplate defeat...it cannot happen.

He sent along a link to this video, which was made in the days leading up to the 2008 FA Cup and of course after watching it I knew I would be cheering for Cardiff on Saturday:

These two teams faced each other twice this year in league action, and each ended in a 1-1 draw.  There will be no draw at Wembley and one of these teams will be playing on TV's around the world next year.  I don't think there could be any better drama written, as a season of football can bring.

OFF MY SOAPBOX
Go Bluebirds