Real Salt Lake by the Numbers - May 25th

Share All sharing options for: Real Salt Lake by the Numbers - May 25th

Well RSL will play their 10th match of the season this weekend and their recent form has many people believing that this team is finally living up to their potential.  I am going to take a look at some of the numbers and what I think they mean.  First up is one of my favorite sites, sportsclubstats.com they take a very math driven look at the everything and while their formula doesn't account for many things the math portion is solid.  So after their 4th win in a row RSL sit today looking like a team destined for the post season: 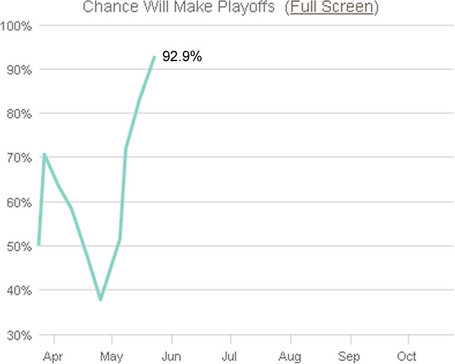 I did find it interesting if RSL were to finish their final 21 matches with a 7-7-7 record which would give them a 12-10-8 season, they would end with 44 points.  The pure match says they are likely to finish out the season with 9 more wins, 5 losses and 7 draws for a total of 50 points. Of course fans of MLS and RSL know that anything can happen, a team can start the season hot and end cold, or the other way around, but I believe their recent form is just an realization of what they are capable of and that the best is yet to come.

More numbers (and charts) after the jump:

Well there really is only one thing that really matters in MLS or in soccer in general and that is the standings (or the table).  While the MLS website has downgraded their offering in this area: 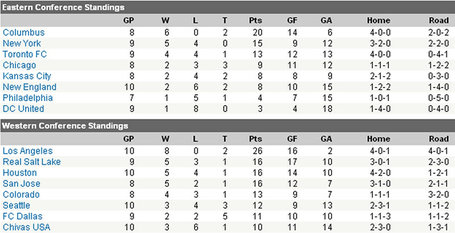 RSL sits nicely in a 3 way tie for second place but holds all the tie breakers over both San Jose and Houston, I do find it interesting that again the Western Conference appears to be the much stronger conference.  Chivas with just 10 points would be in 4th place in the East, but find themselves in the basement of the West.

So now lets take a quick look at the team numbers for RSL: 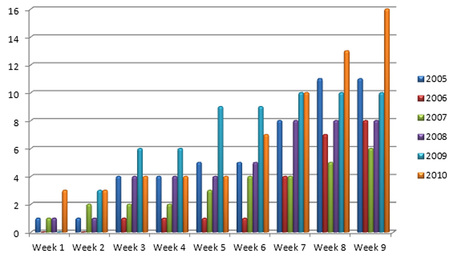 Points are what matter most, and with their current 16 points from their first 9 matches, RSL is averaging 1.78 points per match, if they can maintain this pace they would end the season with 54 points. 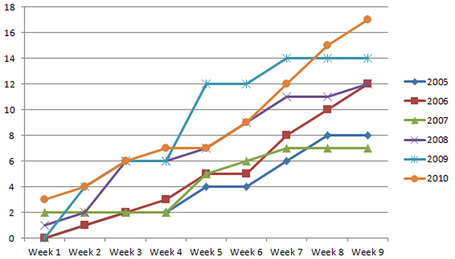 Higher is better on goals for and with 17 goals RSL is off to their best start ever and lead all of MLS in scoring. 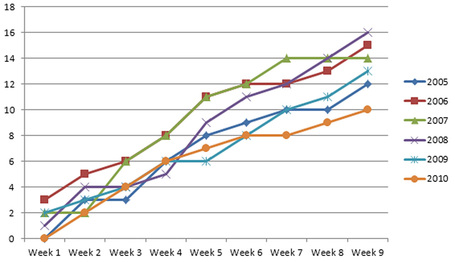 Lower is better on goals allowed and for RSL 10 is the fewest they have ever allowed after 9 matches.

So as you take a look at all the numbers, if you're an RSL fan you have to be happy that the season has seemed to turn around.  A couple other things to remember, we picked up our second road win of the year after just 5 matches, in 2009 we only won that many all season.  For RSL home has been a very good place and with 6 of our next 9 matches being at Rio Tinto, we should see the positive trends continue.