Real Salt Lake by the number - 13 in the books, where do we stand?

Share All sharing options for: Real Salt Lake by the number - 13 in the books, where do we stand?

Well, there is no World Cup matches today so I can actually spend a little time on Real Salt Lake and since it is a short week for RSL, they play again on Friday night, I thought what better than to look at the numbers. One big number for RSL isn't reflected on the stat sheets very well, that is that RSL hasn't given up a goal in over 315 minutes of MLS action, in fact not a single goal was scored against RSL in league play in the month of June.

Now the downside of that is that RSL only scored one goal in league play in the month of June to go 1-0-2, after a perfect May with a 5-0-0.  Still if you look at the standings only one team has more points than RSL, the LA Galaxy, the top two teams in the Eastern conference are both sitting with the same amount as RSL, 24.  That give RSL an average of 1.85 points per match, which would average out to a 30 match season total of 55 points, that is 15 more than RSL has ever finished with in the past.

Lets take a look at how the points stack up for RSL versus the last couple seasons: 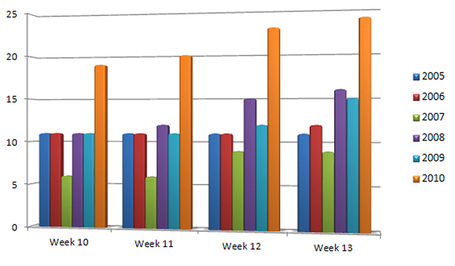 as you can clearly see RSL has despite their slow May, done well in keeping themselves ahead of their own past point totals.

If you have read my blog for long you know that I am a big fan of sportsclubstats.com, a site that looks at the math behind sports and has some interesting numbers that come out of their data. Here is the graph that shows the likelihood that Real Salt Lake will make the 2010 MLS Playoffs: 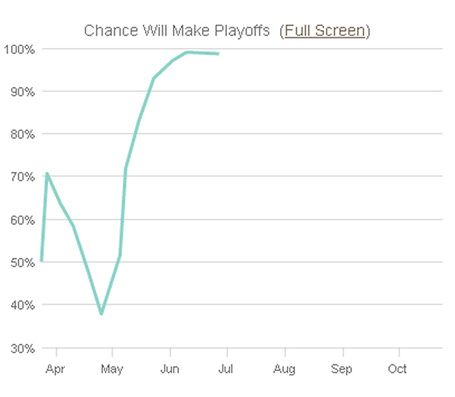 There were only two teams in their system who were above a 60% likelihood at the end of June 2009 that failed to make the playoffs last year, DC United and the Colorado Rapids.  According to their math it is likely that RSL will end the season with between 50-55 points and clearly in the playoffs.

So RSL has a chance to really help themselves out against a struggling New England side this week  before the face two tough road tests with a trip to Chicago followed by a trip down to face FC Dallas.  If RSL can come out of those matches with their unbeaten streak still alive, and a couple of wins they should start to pull away from some of the other Western Conference teams.