Share All sharing options for: Real Salt Lake - by the numbers Week 16

Well at the one match past the halfway mark and despite RSL losing 2-0 in Dallas, if you look at the numbers they are still very impressive.  30 points from 16 matches, it took us until 23 to get their last year, and week 22 in 2008, but what does that mean?  It means that even with a magic number of 43 points to make the playoffs RSL would need to average just 0.93 points per match for the rest of their 14 matches to secure a playoff spot.  Our current average is 1.875 per match.

So if you look around the various places that look at ranking MLS teams by various formulas:

USA Today uses the Sagarin formula which predicts the following: 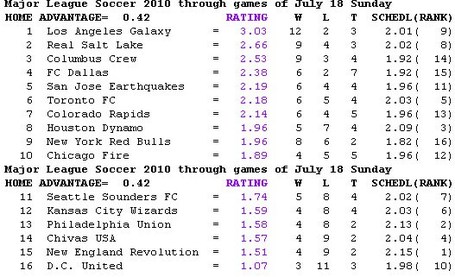 you know I like the stuff from sportsclubstats.com so that and more is after the jump: 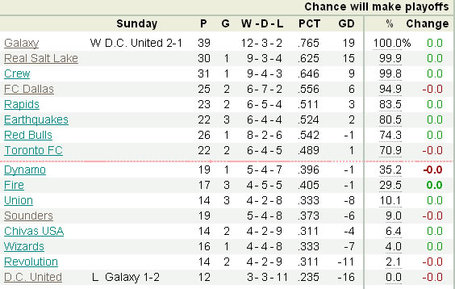 So these numbers can shift quickly if teams going on winning or losing streaks, but the large gap between the top 4 teams and the bottom 4 is very telling.  For Real Salt Lake the bit thing is that they can come close to dealing the fate of Chivas and DC United their next two opponents and both are at Rio Tinto Stadium and the 6 points would push RSL closer to the promised land of the playoffs, while putting Chivas on life support.

RSL still leads MLS with 28 goals, that is 5 ahead of last years pace.  The RSL defense may have lost their shutout streak at 566 minutes, 3rd best in MLS history. Their 13 goals allowed is tied for second best in MLS, and 5 fewer than they had allowed last season at this point.

4 is a good number of All Stars for one team to put on the MLS team to face off against Manchester United, but that number should be 5 as Alvaro Saborio the #3 striker in MLS with 7 goals and 4 assists was overlooked by everyone involved.  In the First XI the selections at forward were Landon Donovan(2 goals, 10 assists) and Edson Buddle(11 goals and 2 assists), then Bruce Arena added just a single striker in Juan Pablo Angel (9 goals and 2 assists) and it is hard to fault any of those picks.  Then came the two picks of MLS Comish Don Garber, he selected two forwards, MLS Original Jamie Moreno(1 goal, 0 assists) and hometown player Brian Ching (3 goals and 1 assist), and to be honest I get the hometown pick, but the selection of 6 time All Star Moreno, who isn't even a starter for his team, makes one wonder if the Comish takes the All Star match seriously at all.

All of these things are solid positives and show that the progress that Real Salt Lake made during the end of 2009 has continued and they are close to their goals of winning another MLS Cup and making it to the knockout round of the CONCACAF Champions League.  If they accomplish those goals, they will have established themselves as an elite club in MLS.