Bruce Arena, spoiled brat or genius? And why does MLS hate the CONCACAF Champions League?

Share All sharing options for: Bruce Arena, spoiled brat or genius? And why does MLS hate the CONCACAF Champions League?

OK, so that is an attention grabbing headline, and perhaps a bit rash but when you consider the facts

I have to admit I am becoming a Bruce Arena hater, not that he is a bad coach, but rather that he seems to be a spoiled brat, who believes that the rules that everyone else has to play by don't apply to him.  It started long before my first encounter with this attitude, I had heard from fans and various people that he was a bit of a bear when dealing with the public both from his days at US Soccer and in MLS.

(On using the U.S. Open Cup to give players extra minutes...) "No, to me these games don't make sense. Essentially it was a reserve game tonight. I think the timing of this competition isn't right for MLS teams; it's a difficult time to try and play these games. I think if see both teams, obviously both want to win, the competition is water down due to the fact that each team is juggling players and see who you want to play and who you don't want to play. For us tonight there were valuable minutes for some players and others not so good."

I wonder if his opinion would have been the same if his team won?  I wonder how in light of this comment he didn't oppose the Galaxy scheduling a friendly match against Real Madrid, in the middle of a busy couple weeks for his team?  I mean they have a league match on July 22nd, then they play the first leg of their CCL qualifying match on the 27th at home, the MLS All Star match the next day , then they have a league match on August 1st, and the away leg (in Puerto Rico) on the 4th of August.

Surely the coach would think his team should rest up for their August 14th match in New York, but no he has allowed the scheduling of a friendly on August 7th against Real Madrid.  So Bruce the timing of a tournament that has remained fairly unchanged for the last few years is an issue but going out and scheduling a friendly match just 3 days after your team plays an important match in another country?  Does this give LA a built in excuse if they don't advance into the group stages of the CCL?  Is Bruce really a genius who builds his schedule to give him some built in excuses if his team should lose?

His "treble" is gone and for me I really wonder based on the scheduling how much he cares about the CCL?  Wouldn't it be easy for him to say to MLS, I can't do the All Star thing with our busy schedule, give it to someone else?  He is in part doing that by turning over the brief training to Houston's Dominic Kinnear, who probably will be the one choosing which Houston players fill out the All Star roster.

Now a part of me can agree with Bruce's point of view and tactics, but then I remember the MLS Cup last year...

See I went to cover the MLS Cup last year, I got a first hand dose of the "Bruce" treatment, MLS has rules that state that the last 15 minutes of practices at MLS Cup had to be open to the media.  RSL had no problem making their practice fit in the rules, and their players available to the media the day before the big match.  The Galaxy and Bruce are a different animal, 15-20 minutes before the time for the Galaxy practice to be opened the MLS media folks ushered the groups down to the tunnel at Qwest field, only to be told to wait, then wait some more, and then to wait some more, finally as the players and staff were leaving the pitch did Bruce allow the media in.  I asked another person there covering the event, how does he get away with bending and breaking the rules like that, their response was simple "He's Bruce".  I would expect that from a rock star, but no here were 40-50 people trying to cover one of the teams for the leagues biggest match and they were left in the wings and stuck with MLS officials trying to cover for the coaches decision.  I wonder what would have happened had the other coach that day made the same choice?

Am I being too critical?  Probably, but I am just tired of the guy who leads the team that is owned by the most powerful owner in MLS, you know one who can get the rules changed, or exemptions to the rules.  You know the reason we have a multiple DP rule in place today is in large part due to LA having both Beckham and Donovan on their roster, not the only reason but one of them.  I mean how many teams would have been allowed to have two players over the DP limit, in addition to David Beckham?  Yeah the "grandfather" clause, more like the we all owe a debt to Phil and we need to help him get another trophy clause.  That is just my opinion and I do understand the debt we owe Phil and the reality is that we wouldn't be watching MLS if it weren't for him and a few others who have kept the league alive.

I do agree with Bruce that the timing of the US Open Cup could be made better, even more so this year with the 21 day break from MLS action.  I think some of it comes down to a bigger issue, of what MLS thinks is important, and what SUM thinks is important.  Let's take a look at something that I think Bruce might agree with me on.

SuperLiga, you know the tournament made up by SUM to leverage selling TV rights to Hispanic TV stations.  The one that had so many issues when it was found out that if a MLS team won, that the league would take most of the 1 million dollar first prize, the one that MLS has no problem adjusting the schedules of the MLS teams taking part in the tournament.

So let's look at the schedule for the Chicago Fire, one of the teams taking part in this years SuperLiga:

They get a break from MLS action from July 8th to August 1st, while they are in SuperLiga.  While the break for Chivas isn't as drastic it still is major one:

Chivas only gets a break of the 10th to the 24th for their 3 SuperLiga matches, but still they get a break from their regular league schedule for a "created" tournament that was made up by SUM, but obviously is supported at great length by MLS.

Then compare it to the CONCACAF Champions League, you know a tournament that the winner gets to play in the FIFA Team World Cup if they win, a real tournament with teams from all around the federation playing in.  But MLS makes no such exemptions or schedule changes for its teams playing in that one. 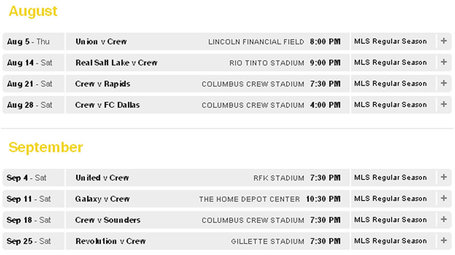 The Crew will play 5 matches in 14 days, including a trip out of the US to face one of their opponents between the 14th and 28th of August, then again 5 matches between the 11th of September and the 25th.  Clearly the advantage given to the teams competing in the SuperLiga is few matches in the same number of days, could this be caused by the fact that the league profits from the success of MLS teams in SuperLiga more than they do in CCL?

So let's take a look at Real Salt Lake's schedule when compared to the CCL dates: 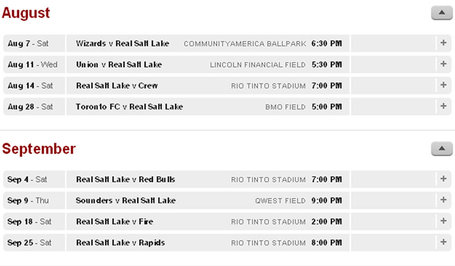 So one could ask the question of why for all the talk by the heads of the league about wanting to do well in the CCL, why no scheduling break like they give for SuperLiga, and in part to Bruce's quote, why no break on US Open Cup dates?

I am still undecided on if Bruce Arena is a genius or a crybaby, but you have to wonder about the MLS's commitment level to the CONCACAF Champions League.