Share All sharing options for: Real Salt Lake 1 - Chicago Fire 0 - History made but plenty left to do - match recap

OK, I am going to try something a little different with this one as I will offer my thoughts on Saturday's 1-0 win, I will post some of the match facts, the video from Jason's post match press conference and then the quotes from both locker rooms.  A lot of info for you.

It was interesting as I talked before the match with a couple RSL people about the match and for them, it was about getting the result so the obsession of some with the home unbeaten streak would be over and they could get back to the business at hand.  I couldn't have said it better, listen everyone wanted the win and everyone wanted to set this record to show that while we may not have 30,000 people at every match like some markets, while we may not sell out every match like some markets, we do have a unique combination of quality stadium, great fans, and a team that believes that they can win every match, and that refuse to accept losses at home.

Once the match got underway it was interesting as Chicago went with a fairly aggressive lineup and they clearly knew the importance of the match.  RSL for the second match in a row started a bit slow, but regained their  swagger and confidence as the first half progressed.  When RSL started to step their play up it was clear that Chicago knew they were in a bit of trouble and you could see their defenders become much more physical both on and off the ball, and to be honest the number and severity of fouls that were committed by William Conde on Alvaro Saborio should have gotten him a second yellow card before the first half stoppage time foul in the area that got him his second yellow and gave RSL the PK attempt.

I thought this match would be a battle and it clearly was as both sides knew how important a result would be,  I also thought it would be a match that would find the final 15 minutes of the halves to be the most critical time and it really was.  The pressure that lead to the PK was a result of the effort to finish the half strong and it forced Chicago to crack, in the second half it came close to leading to a goal as RSL fired 5 shots including one that hit the post and was just inches away from the second goal.  In the end RSL managed to get the critical win to put them at the top of MLS, and depending on other results their stay could be hours long or maybe they are there to stay.  Either way RSL made history today and they celebrated after the match by raising this banner: 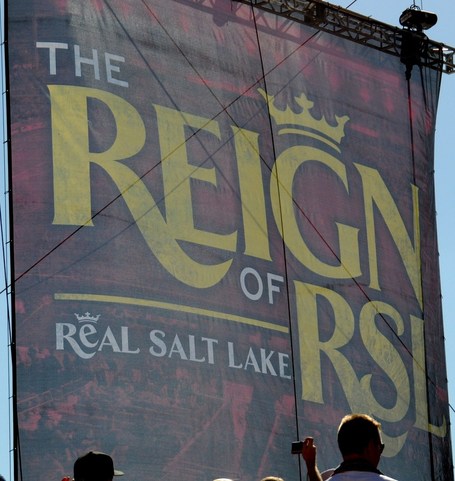 after the jump the match facts, and quotes:

"It's really cool. We've put a lot of emphasis on it, and we haven't shied away from our feelings about how important it is to our club, our coaching staff, and our players.  We've taken a lot of pride in it and put a lot of weight in it.  So now we get to, at least for a few minutes, celebrate it."

On the MLS debut of FW Paulo Jr.:

"I thought he came in and did pretty well this afternoon.  The first thing he does when he gets on the ball is take a shot, which hit the post.  That's why we signed him, because we know he strikes a fantastic ball. He can do some dangerous things in and around the opponent's goal."

On the potential of this RSL squad:

On what to take from today's record-setting result:

"[The record's] definitely a big deal, something that we'll look back on and be proud of. We've just got to find that energy. We need to fix that before the next game.  We're going to be really tough to beat in the playoffs."

On his penalty kick conversion just before halftime:

"I aimed for the right side of the ‘keeper and hoped that it would go through.  Here I've made four [penalties] already, so I'm very confident.  I feel good when I have to make the penalty.  I don't remember [the last time I missed one]."

"It's great. I think it's wonderful for the team and the club.  Now we have to look forward and keep it going."

On the team's defensive performance and shutout against Chicago:

"You don't think about it until the 19th or 20th game comes around and you get closer to records. Obviously your focus is always on the game, but in the back of your brain you're thinking about getting those records. We really wanted it.  Even though some of the games were ugly, as a team we grew up and found a way to win.  We want to continue to write history for Real Salt Lake."

Overall thoughts on the match:

"The first half was very balanced, and we had two chances to score. But all season long we have been having big mistakes, and we are not learning from them. In the final minutes of the first half and the final minutes of the match we lost concentration and we were not focused. All the guys fought and tried to make good things happen in the second half. I think the guys gave 100% today."

On the Fire's playoff chances:

"It's definitely difficult now, but we still have seven matches left to play and that's 21 points available. We need to fight. We are losing points because we are not concentrating all the time. The other reason it is difficult is because the other teams in the [Eastern] Conference are adding points. We have really good moments in all of our matches, but we are not taking advantage of this."

On the difficulty of playing a man down:

"It's very difficult to play the second half missing a player, even if you have a very good team overall. But we are a team that always wants to try to attack. We tried to control the ball, but it is just more difficult [with ten men]."

On the Fire's performance on the day:

"It was not good. We are having a mental struggle and it's about getting guys working. We have very good individual soccer players, but we need to form that team and getting guys to work [as a team]. When the game is going rough we need guys to step up and work hard rather than trying to play possession, and we just need to get after it. And we are not doing that right now."

On the physical nature of the match:

"As far as the physical play goes, that's just the game. I don't think it was any worse than any other game that I have been in. There some plays here and there that some players got in on, but that's mild compared to when it starts in the playoffs. It's part of the game."

On having to play with 10 men for the second 45 minutes:

"It was good in a sense for us because [Real Salt Lake] stopped attacking and they were playing possession, which gave us a few opportunities to go in on goal."

On what to expect for the remainder of the season:

"We just need to focus on MLS. All it takes is for one team above us to screw up and for us to start winning some games. All we have to do is squeak into the playoffs. For me, and a lot of the guys, we are still going to battle. Every game for us has a playoff mentality."

On his return to the pitch:

"It was great to get back on the field. It had been a while since I've played with the team, and it was nice to get in the game and fight for a result."

On whether the Fire can still make the playoffs:

"We have to work hard. We made it to the [Conference Finals] last year. We are going to do everything we can and work really hard until the end of the season."

So I said earlier this week that RSL had 5 matches in 13 days that would be major pieces in determining what the final story of our #TrophiesnotFriendlies campaign would be.  Well we wrapped up a second straight victory at home but the task gets much harder as 2 of the final 3 of this stretch will be on the road.  Next up a trip to Panama, and a chance to take a step closer to the CONCACAF Champions League title.