Oh, I know I am going to get an earful from some fans in the sections where prices are going up, but when you look at the overall pricing the majority of people get considerable price reductions.  Now there is some reclassification of the West side seats as a more premium seat (sitting in the shade I guess), which could hike the prices for some people and the North end has been reclassified as the team drops down in the number of price points as well.

You will remember that when RSL had their first full season in Rio Tinto (2009) that there were 9 price points for tickets including the 100 Lions club, and then last year in 2010 we saw that number drop down to 6 and now in 2011 we will see it drop to just 5 price points.

So shall we get down to the nitty gritty of the prices, first a look back at the 2009 pricing: 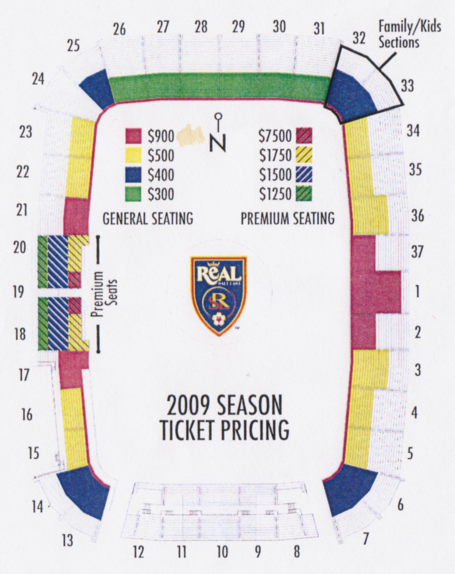 After the jump we will look at all the 2011 pricing but here is just a teaser for the supporter groups:
South End Supporters Sections- $200 per seat

That is down $50 per seat and we still will get 20 tickets, do you need more of a reason to join a supporters group?

Now two years after the move to Rio Tinto, we have won a MLS Cup, we have tied (and soon will break) the MLS record for longest undefeated streak at home and while many refer to our stadium as a fortress, I like when Jason said that for many of our players who were here when we move into the stadium it is their home.  So I say we call it "Castle Real" from now on as your home is your castle.  Now back to the prices: 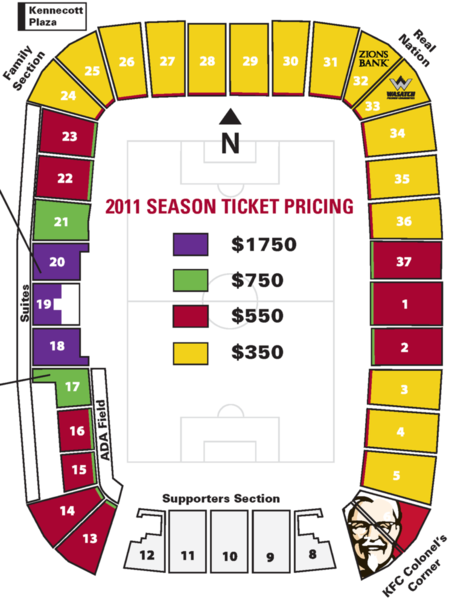 For section 3,4,5,34, 35, and 36 this will be a drop of $125 per seat and a drop of $400 for the front row seats in those sections.  For 24-33 it will be a $75 dollar price increase, but if you currently have season tickets in those section you will have and option that will let you renew at the 2010 pricing, but I believe it will require a 3 year commitment (not sure how the works).  Now I know a good number of people up in section 26 will probably be up in arms over this and I don't blame them but what better time to move from the behind the goal seats to something with a better view?  Or come on down to the south end where you will be able to get those $200 supporter section seats.

There was no real price cut here as these seats were advertised at this price point in 2010, they did raise them when they became the "All you can eat" seats and these seats were given some additional benefits.

As I said I am sure some people will be very happy with this, like me it drops my tickets in section 4 down by $125 per seat and will likely with the change to the front row prices be enough for me to consider moving my tickets to the front row.  Of course I also save with the changes to the supporters' sections by $50 per seat.  I know a number of people who will see their prices go up unless they chose that "Loyalty Plan" which will lock in their 2010 rates.  No changes of this scope will ever make everyone happy and I am sure this one won't either.

I actually expected with RSL winning the Cup last year and having a historic follow up season that we might see a slight increase in season ticket prices but when I look around the league I think we have the best bargain in MLS.