Major League Soccer's team #20, who, why, and why not Part I

Share All sharing options for: Major League Soccer's team #20, who, why, and why not Part I

So a couple weeks ago I got a tweet from @MLSinVegas about the renewed effort to land a MLS franchise in my favorite city in the world Las Vegas. Now this story isn't new as there was an effort in 2007 to land a team, and then there was an effort to buy the Columbus Crew and move them to Sin City, and now there is renewed effort to once again. Let me be clear, I fully support the effort but it doesn't mean that this go around is anything more than a glorified pipe dream, but I hope it is.

This post also started out in my concerns about the New York Cosmos, which seems to be everyone's choice for team #20 from "the Don" to the results of polls around the internet (link 1, link 2). I have thought that the efforts to revive the glory days of the NASL's Cosmos might just be a very fancy shell game, bring in Pele, line up some investors, get some merchandise and grab as much money as you can on your way out the door. This week it was announced that LA Galaxy Asst. Coach Cobi Jones has joined the Cosmos, which in a lot of minds added a whole lot of credibility to the not yet a team - team. I am not so convinced.

On his way to the MLS Combine " the Don" stopped by a meeting with some supporters in Miami who want MLS to return to that city, which caused some fans in Tampa Bay to say wait a minute what about us. Then there is San Antonio, who announced a USL/NASL/USSSF team called the Scorpions who they believe will progress into being a MLS side.

A few people have looked at this topic recently, check out the offering from Major League Soccer Talk, and a fairly exhaustive look from All Things Footy (whom I will be linking to often on particular markets).

There are also some cities that have been mentioned for possible expansion as well, after the jump we will take a look at where MLS might be heading: 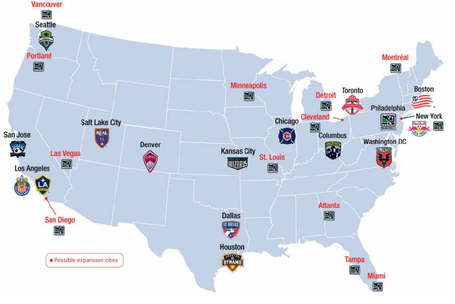 of course we know that since the time of this document that Philly, Vancouver, Portland and Montreal have all been awarded franchises, so that leaves the following:

we have also seen a couple cities not on that map put themselves on the radar, including:
I will take a look at some of these cities in real detail, others I will provide you links to others who have looked at them and what they think. It is important to know what MLS is looking for in a new team/market so lets start there.
In 2005 San Antonio was one of the favorites to get a MLS team, but local politics ended up clouding the bid process, the mayor said it didn't make financial sense and MLS said the city wasn't operating in good faith. Flash forward to 2011, with the announcement of a San Antonio based Division 2 Scorpions who plan to join the NASL in 2012, and the efforts of the Crocketteers and San Antonio is back in the middle of the conversation. I do think that it is a stretch at best, given the failure of Austin to be able to support the Aztexs last year and there is no real history of professional soccer in that market. I think a group of fans making noise is a great thing, if they show up in numbers to support a division 2 team for a few years then maybe they can be taken more seriously. All Things Footy did a detailed look at a number of potential homes for team #20, click here for their thoughts on San Antonio.
For the first couple years at Rice Eccles Stadium in Salt Lake city, I would see this silly kid holding up a "MLS in Rochester" sign, and I would just laugh at him. But in Rochester, the continued support for the Rhino's keeps hope alive, but without any signs of an ownership group or anyone willing to pay for the upgrades to their current stadium it will take more than 5-6,000 fans showing up to matches. While I think they would support a MLS team, I just don't see expansion going to a smaller market anymore, there is simply too much demand from bigger markets, their shot may have left MLS when Doug Logan left. With the move to put a second team in New York City (dang that reminds me of old salsa commercials where someone would say "get a rope"), I just don't see it happening.
There are a few other markets that simply seem like extreme long shots at best, St. Louis where their Division 2 team failed, Detroit is a city that has to figure out a lot bigger issues than how to support a MLS team, Ottawa won't be the 4th Canadian city to join MLS, at least as team number 20. Cleveland may have been a potential city until Drew got partial ownership in Seattle, now I am sure nobody cares about putting a second team in Ohio, Phoenix has a lot of issues and trying to play MLS in 110 plus heat all summer just seems a bit of a pipe dream.
I am sure my opinions and thought will differ from many, feel free to post links, ideas, opinions and whatever you think will make a case for or against a particular market
I will take a closer look at some of the other markets in Part II.
OFF MY SOAPBOX