So please watch the video before reading any further:

So let me just say I am not suggesting that anyone "get's a rope" but everytime I see more hype about the New York Cosmos and what might be, I flashback to this commercial. Realizing that San Antonio is one of the other teams trying to lure MLS to their city, well that just makes it even funnier.

Now I have seen the amazing PR machine at work for the Cosmos, I mean heck they hire some big names (really big names) but I still haven't seen a plan to pay for a stadium (or the 1/4 to 1/2 billion it will take to pay for it). If they are to be Team #20, I wonder why they didn't go with long time MLS partner Adidas for their merchandise line and chose Umbro (Nike) the main rival of the MLS partner?

While I hear from everyone who talks on behalf of the newly re-birthed brand that they want to join MLS, I see no plan or mention of the league on their website. While "King Eric" stated:

"I am very honored to join the legendary club New York Cosmos. It's a big project, a wonderful project. The Cosmos are very strong, beautifully made, with a great past. It's kind of a mix between football and art. In addition to my artistic engagements, I will do everything that I can to help us first find our way to regain the #1 position in the United States, and then for us to become one of the best clubs in the world over the coming years." nycosmos.com

I didn't hear him mention MLS, and the whole mix of football and art thing is just a bit "different". You will also notice he didn't say #1 position in MLS, nope. So are they establishing a line of clothing and merchandise and living off the memories of the bloated payroll that almost singlehandedly killed the NASL? Are they planning on doing the same yet again? We already have a couple teams trying to "buy" championships in MLS, and none of them have done it (yet).

There are some who believe that the Cosmos may be the best thing ever to happen to MLS:

It is interesting to me that the title of that article is" The New York Cosmos Hire Eric Cantona as Ambitious MLS Bid Takes Flight" that has just a bit of a different ring to it, than the point he made in his tweet. In the article he makes this point:

The Cosmos have set a standard.

We're not saying that the Chicago Fire should go hire Diego Maradona as equipment manager. But the Cosmos' ambitious advertising, their proactive social media efforts (the club follows more than 2,200 people on Twitter, more than 14 of the 18 MLS clubs) and their interest in engaging the press (they sent Christmas presents to writers and bloggers -- some teams still haven't figured out how to send a press release) represents something worthy of respect. They are trying to create and engage an audience.

He is right, I know several who got their gift packs and several who have been "recruited" by the Cosmos organization. They have grown a quick following by offering prizes and such, but those numbers aren't overly impressive when you consider the team in the smallest market in MLS- Real Salt Lake has over 5,000 follower on twitter, and 40,000 more "likes" on facebook than do the legendary Cosmos.

Now I am not the only one who thinks that this may be more "flash than substance", in fact Dave Clark from Sounderatheart.com recently said this:

You know those kids that wear the Negro League Baseball caps? So you ask them about Satchel Paige and they look at you like you are the idiot? Or those that wear rugby shirts, and yet they don't know about the Super League? Those guys that absolutely love the University of Washington but couldn't talk to you about Don James?

Somewhere, some marketing guru/dork managed to sell a brand. They absorbed a little bit of history, wrapped it up in myth and slapped it on some cotton from Pakistan, or somewhere else and people started buying it. The youth buying these items don't generally know about the history of what they are getting. They like the look, the feel, the myth.

That's the current version of the New York Cosmos.

now, not everyone is in the "rah, rah" camp or the "sick of hype" camp (just check the comments on Dave's blog post). There are some voices in the middle, like Jason Davis of Match Fit USA (whom like the others I have mentioned I have a ton of respect for) who offers us this:

The Cosmos are a reverse Keyzer Soze; they've managed to convince the American soccer community (specifically, those covering the sport) that they exist as a legitimate operation when it's still all noise and probably will be for some time. Eric Cantona is a director of nothing, and even those lauding the Cosmos recognize that hiring Cantona is nothing more than a publicity grab. Nevertheless, praise is flowing in ample measure because it worked. Like with some many things they have done, Cantona got the Cosmos headlines around the world.

I'm tempted to say "So what?" to any headlines garnered outside of the US (you know, the place where the Cosmos are supposedly pushing to launch their team). The back cover of The Sun might represent a free publicity coup on some massive handshakes-and-cigars-all-around level, but I don't see how it has much to do with the Cosmos as a legitimate American soccer concern. I can see how it might be a big deal for a company looking to "build a brand" to sell things that have little to do with a mythical MLS expansion franchise.

Now most of you who read my blog know that I am a cynic at heart, unless it is RSL related, and I am going to be 100% honest with you all, because I try to be that all the time. When I first heard about the "re-birth" of the brand, which was just the rights to the name and logo being sold, it didn't raise a concern, I simply didn't care. Then when I read the 442 article on the topic, you know the one with Pele on the cover: 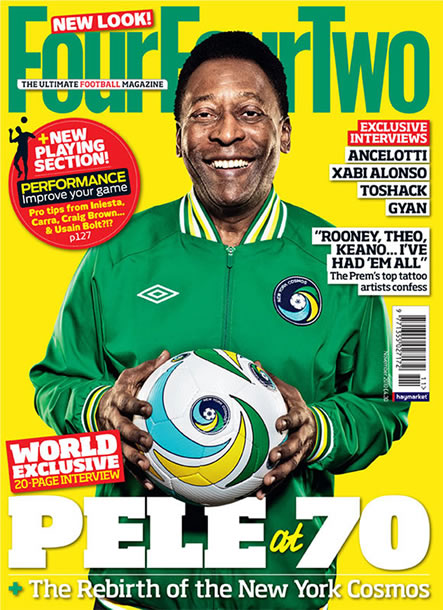 if you don't read 442.com or subscribe to the magazine you are missing out

It was this and the article within that made me start to wonder if this was a very fancy money grab? Was this a way for some guys to spend a couple million dollars buying a brand that because of Pele had worldwide appeal? Well getting the living legend involved gave the new project real credibility, but as what? The newly launched organization quickly signed a merchandise deal, but as I mentioned they didn't chose to go with MLS partner Adidas, but they at least had some money coming in, they had some of the previously mentioned "gifts".

At this point I wondered if it was all indeed a "shell game" you know someone shows you a pea and then hides it under a shell and mixes the shell up with other shells and you try to bet on where it is, only to find the pea isn't under any of the shells and your money is gone as well.

Now I have no proof of any of this, it is simply my "gut" feeling. Slowly the signings of some of the biggest names in soccer have changed my mind about this, and the support of "the Don" and others provides a huge amount of credibility to me. Then I remember some of the very smart, very legit people and organizations that were victims of Bernie Madoff. I am sure that all of this is on the up and up, and that my gut is simply reacting to the long exposure to antibiotics over the last few months. Will the New York Cosmos be team #20 in Major League Soccer? I am not sure but I will go over the pure soccer facts regarding their chances in part III of my series on the topic of "MLS team #20, who, why, and why not", which will be published on Saturday.

Until then make up your own opinion, are the Cosmos the savior of MLS, are they just a glorified hype machine, or something in-between? I know for me the jury is still out, renting a high priced electronic billboard in Times Square may impress a lot of people, me not so much.