Well Friday was an incredible day in my road trip to MLS Cup, it started with an early morning in Las Vegas and ended with a late morning end to the Supporters Summit meet & greet. Before departing Las Vegas it was time to stop by the sports book at the MGM Grand and place a wager on MLS Cup, but as I mentioned yesterday there were multiple options so I actually ended up making two bets on the Sunday match. First up was the proposition bet on who would score the first goal in the match, while the odds makers all leaned towards the LA guys I found that idea that Houston Dynamo striker Brian Ching was a 10/1 long shot of scoring that first goal too hard of a bet to pass up. Then on the match itself it again was just too hard to resist the underdog bet, so I put my money on the Houston Dynamo to win the match. It was less about what I thought would happen and more about the +400 that they were offering on a Dynamo win bet.

Then it was a quick breakfast and on the road to LA, we arrived and of course the first stop was the Home Depot Center and while we missed the MVP award presentation we were able to see the preparations of getting everything ready for Sunday's big match. The banners were up and of course I had to stop by their team store and pick up a couple of new items for my collection. Then it was off to the hotel to get checked in and settled a bit, a quick trip to the local BevMo and then some dinner.

The evening was all about the Supporters Summit meet & greet, a great event where fans from almost every team in MLS made the journey to LA to gather and work on how to make the supporter experience a better one.

more details after the jump:

So the event was sponsored by Budweiser, a MLS sponsor as well, the event kicked off with some good old fashioned socializing, learning the game PoolBall, which is a combination of soccer and pool: 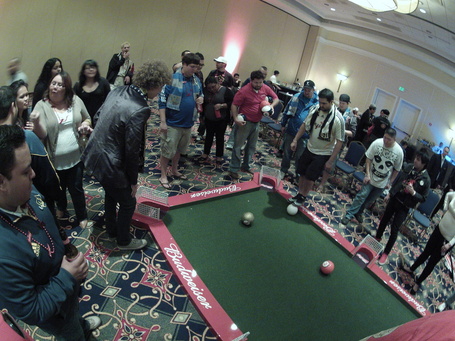 checking out the items up for drawings and silent auction, some drinks (provided by Bud), and some snacks. It was very cool that Budweiser brought in one of their master brewers to explain the beer making process to everyone. He even brought samples of some of the ingredients and examples of the product at various stages of the brewing process: 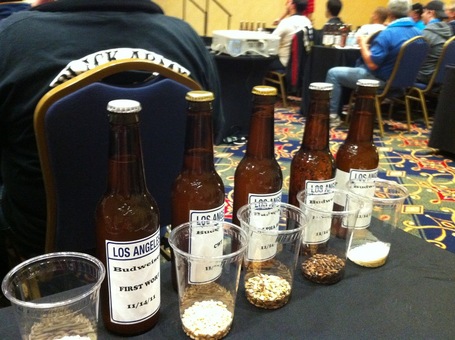 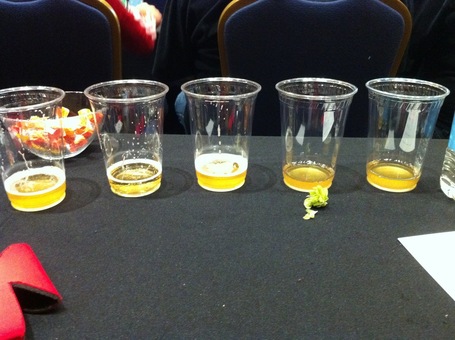 It was an interesting presentation but it was back to the other room for more socializing and PoolBall, if your still not sure what it is then check out this very short. PoolBall video.

If you weren't playing the game it really was more about just having a chance to talk with other fans from around the league about our passion and that is always enough entertainment for me (yeah the free beer didn't hurt either). One of the more interesting conversations of the night was with a young man from Vancouver who it seems is like me and not too keen on the idea of an unbalanced schedule. While I posted some of my ideas on how we could avoid the issues Don Garber mentioned as roadblocks to keeping it, Brett Graham actually crunched the numbers and put together an impressive paper on the topic (more on that in an upcoming post).

It was also great to see Chivas USA player Heath Pearce show up to hang out with both the many Chivas fans as well as everyone else, I had a quick chance to talk with him and he is very optimistic about the rebuilding going on at Chivas and the work that Robin Fraser has begun with the team. He also said he is hoping that now that he is healthy again that perhaps a call up to the USMNT camp in January will be in Jurgen's plans. A great guy and I think him for taking a few minutes to chat.

Over all it was simply a very fun night and a great chance to meet some of the most passionate fans of MLS. A big thanks to Evan at MLS, the Angel City Brigade, and to Budweiser for putting on such a great event 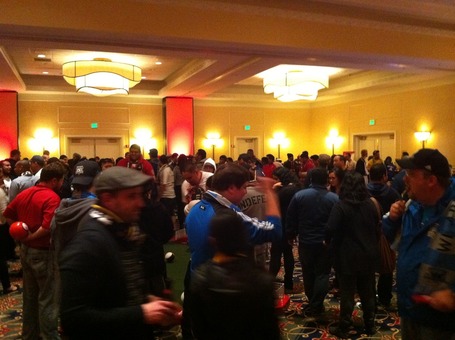 .I am sure I will have more updates for you both from the Saturday practice sessions and more of the Supporters Summit events, oh and the kick ass Nike/Bumpy Pitch party in Hollywood tonight, but for now I am