So for me I really believe there are 3 cities that Major League Soccer has to consider for their 20th team, and will all respect to "the Don" it is about a lot more than a "fake" rival for the Red Bulls.  For me this is the point at which MLS will need to stop expanding for a couple years, and has been mentioned by others, consider relocation of some teams that are struggling (that list should be smaller as KC gets a new stadium this year, and Colorado and Dallas are coming off appearances in MLS Cup 2010).

So what does team #20 mean to MLS, for me it needs to be a big splash, great PR and a city that begs for fans to go there for away matches (we have too few destinations in MLS-including my Salt Lake).  Road trips to San Jose, Dallas, KC, Colorado, Portland, New England, and many other markets just appeal to a small percentage of the teams fans. Team #20 should change that and my big 3 all have that potential, Miami, New York, and Las Vegas, each of which is a world class destination, each of which could play hosts to MLS events like the All Star Match, MLS Cup, and each could support large world class friendlies.  Flights to these markets are easy to get, and usually not too expensive, each offers a selection of hotels and night life for fans, and each could become a "destination road trip" for any fans from hardcore supporter groups, to the casual fan on a family trip.

So after the jump I will look at each of them in depth:

So let's start with what might be the most logical move for MLS to make, a return to the Southeast and Miami. A former home to MLS, and current home of the D2 Miami FC, some like me believe that Miami had their chance and honestly blew it.

Then last summer came the talk that FC Barcelona as interested in starting a MLS team and that they were looking at Miami as the location of that team.  This of course would change most peoples opinions of the league returning to Miami, it of course didn't really deal with the SSS issue, which is a core issue for any location wanting to get a MLS team.  When that fell through the talk stopped about Miami, and recently while attending the MLS Combine, "the Don" scheduled a meeting with the "throngs" of Miami fans that send him emails all the time telling him how the league must return to their city.

Flash forward to the actual meeting and how not to impress the leader of a league that you want to come to your city, have 60 people show up. having your local online media get upset before the meeting, don't complain about things with your current team that you don't support, instead show up in numbers at Miami FC events, hold a huge watch party for the next USMNT event, and stop playing the victim.

So now with Barcelona saying no to Miami, and "the Don" saying get your act together, they are now going to pin the hopes on David Beckham.  Yes you heard me a wildcard in the mix is LA Galaxy player David Beckham, see when "goldenballs" came to MLS one of the many conditions was that he would be allowed to buy a franchise (perhaps #20) but it appears the condition is that it can't be in LA or New York.  Of course they may not be the only city looking to capture the interest of Beck's.  Once again All Things Footy have a great thought on this topic:

This will not be easy. In fact, I'd say a South Florida team might be the biggest challenge MLS will have to face.

So I have made it kinda clear with previous posts, that I am not a fan of New York City getting a second team (yeah, I know the Red Bulls play in New Jersey, blah, blah, blah - you guys sound like the pro/rel people).  Yes I understand that "the Don" believes that after a new stadium, 3 DP's and more league PR than anyone else since Seattle, that what might finally make the Red Bulls sell out matches would be a cross river rival.

Good god, someone buy that man a clue.  I get the history, I see that they can market in London, and the Middle East, but until they have real plans for a real stadium, they can kiss the idea of a real team good bye.  Sure there would be some attention paid to the "New" New York Cosmos, and then when they struggle on the pitch that attention would require Pele doing autograph signings after each match, that means both at home and on the road. I thought perhaps the best ideas for the Cosmos came this weekend out of south Florida, they should join division 2 of US Soccer, where there is no cap on payroll and they can do whatever it is they like.  Of course the contention that MLS needs the Cosmos is just plain funny, the newness goes away very quickly in MLS, just ask most teams how many extra tickets they sell when Beckham comes to town?  From sellouts the first year, to just minor bumps anymore.  TH14 will find the same thing this year as the "wow" factor just isn't long lasting in MLS, and the Cosmos let people who want to go back to the NASL of the 70's just don't understand that it isn't going to happen.

New York is a wonderful market, and I would say to them the same thing that "the Don" said to fans in Miami, support the team you already have and then we can talk.  When $200 million plus on a new stadium, and 3 DP's can get you barely 1,000 more fans per average at home than RSL, there is a bit of an issue.  Oh I know the Red Bulls play in New Jersey, blah, blah, and a team in Queens would do so much better, blah, blah.  Proof is in the pudding, and the reality is that nobody in the current ownership of the Cosmos can afford the expansion fee, let alone come up with the money to build a stadium, so when they have $250 million in the bank then I will pay attention.  Of course New York does have other suitors as well, but the Wilpons bid now looks weaker as they cut payroll and sell of an interest in the Mets, but there is a lot of money in New York the question is does it care about Major League Soccer?

So all of this leads me to a pipe dream, Las Vegas.  It should be simple for most fans of MLS to jump behind the efforts of bringing MLS to Las Vegas, there simply is no better place for an annual road trip, or MLS Cup?  Now they have had efforts in the past, they tried to bid for a team in 2007 led by Mark Noorzai and the Las Vegas Sports & Entertainment Group.  They had lined up the $35 million dollar expansion fee, and had an investor group with a net worth in the billions lined up behind an very ambitious $500 million dollar retractable roof stadium. Then the phone didn't ring, and despite Mark Abbot's comments:

MLS President Mark Abbott, who oversees expansion, said the realistic timetable for the construction of a stadium is 18 months, so awarding a franchise to a particular group or city isn't a pressing issue.

Speaking from his New York office Wednesday afternoon, Abbott declined to comment about any prospective ownership group or proposal.

"It's fair to say that Las Vegas is a market that's interesting to us," he said. "We think it would be very supportive of professional soccer, so it's a market we're looking at."

Then in 2008 the same group tried to purchase the Columbus Crew with the intention of moving them to Las Vegas for the 2011 season, but those plans never amounted to much and no proposal was ever submitted to MLS. Then the talk stopped for a long time, but then just a few weeks ago up popped @MLSinVegas in Twitter.  That lead me to find out that a small group are trying to get the bandwagon moving again and now it involves a designer (Joshua A. Boren) from the firm of Aedas (which has built some incredible projects) and some others but so far it hasn't involved Mr. Noorzai.  They have some good ideas, but they need to find out if the economic issues that likely killed Mark's efforts after 2008.

Now unlike the other cities, I am going to let those working on the Las Vegas bid on how to make their dream (and mine) come true.  1st, take over the Silver State Arena Project convert it to a retractable roof outdoor stadium and up the seating to 30-35,000.  This will stop a lot of the protests and lawsuits of those who don't want to compete with it as an indoor venue and the expected cost was already heading towards $750 million, you can cut that down and still get a world class venue.  The location is primed and ready to go, if your bankroll guys want a casino too, no problem one is halfway build right next door. The Fontainebleau is just waiting for someone to finish it. 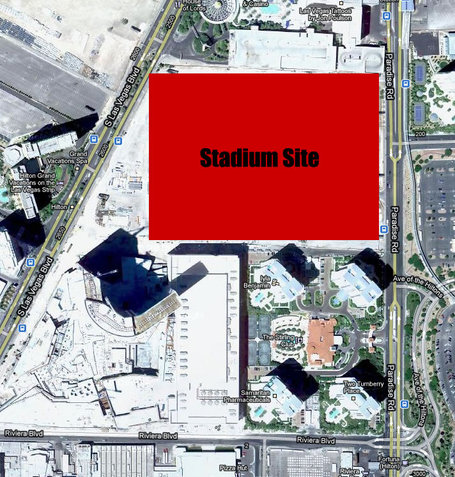 In all of the United States is there a more perfect location for a true iconic stadium for the Beautiful game?  It would quickly become the venue of choice for all international teams coming to the US, it would be perfect as the home for MLS Cup, All Star Game, World Cup Qualifiers, and just about every match you could ever imagine.  Las Vegas is already a destination for visitors to the US, now it could become a world wide soccer destination. Remember the idea of playing an EPL match in the US, where better.  I could probably find 5 kit sponsors in a week willing to pony up to be on that kit, perfect location for TV, and imagine the tie in events you could do.  See Cher after the Vegas AC vs. LA Galaxy match, heck you might even get nationwide TV for something like that.

Oh the possibilities are endless and that is what makes it clear in my mind that the time is now for the parties that want to make this happen to step up.  Yeah the economy is still recovering, but this is Vegas and even in the bad time it is the only city other than New York that can say it never sleeps.

The step that needs to be taken next is for those who have the money but need to prove the concept to "the Don" and others is to spend some money, get an office in Vegas, take a page from the Cosmos' and design a kit (with Adidas- a MLS partner), talk with potential jersey sponsors, get a website going, host watching parties around town to show the interest (use the World Cup US vs England numbers as justification).  This isn't going to happen by itself and if guys like @MLSinVegas want to be taken seriously, then get off the pot and get on the job.  Oh and call David Beckham, he holds the keys to a franchise and his wife loves to shop and he would love Vegas.

Now should the New York bid (whichever one "the Don" likes best) get team #20 and it likely will, then the folks in Vegas need to get their act together because I don't see Chivas staying in LA if other markets come calling with a state of the art stadium.

Well after all of that, you know now my opinion on just about every potential market MLS could be looking at and nothing would make me happier than Vegas being team #20 and the Cosmos returning to the NASL.