So you thought I was crazy when I said MLS should put team #20 in Las Vegas, well

Share All sharing options for: So you thought I was crazy when I said MLS should put team #20 in Las Vegas, well

Now you can see the influence that a well place blog post can have, OK that is taking credit that I am not due but it was just a couple weeks ago that I posted this as part of my look at where MLS should put their next team:

In all of the United States is there a more perfect location for a true iconic stadium for the Beautiful game? It would quickly become the venue of choice for all international teams coming to the US, it would be perfect as the home for MLS Cup, All Star Game, World Cup Qualifiers, and just about every match you could ever imagine. Las Vegas is already a destination for visitors to the US, now it could become a world wide soccer destination. Remember the idea of playing an EPL match in the US, where better. I could probably find 5 kit sponsors in a week willing to pony up to be on that kit, perfect location for TV, and imagine the tie in events you could do. See Cher after the Vegas AC vs. LA Galaxy match, heck you might even get nationwide TV for something like that.

In fact just a day after my post a group made a proposal to the Regents at UNLV about building a new stadium (and yes their plans included an option for footy)  and while that plan is cool and the people who are proposing it are the same ones who have natural grass at University of Phoenix field, I don't think that is what MLS needs.  As I pointed out in my post, there is a project that already has funding in Vegas that was to build a NBA style stadium right on the strip, I think now that the NBA is pulling back, I said then and I say no that the project could easily be updated to be a 35-40,000 seat covered soccer stadium.

Things get interesting after the jump:

well now guess what, Mayor Goodman is now sounding like he might just be getting on board with MLS:

"(Soccer) is becoming a very important sport so I think that will be a natural here," he said. "I think you can make it into a great real estate play if you took the time to put the right groups together."

Well that isn't all also this week a group proposed a huge sports complex idea near downtown, included is a partially domed stadium that could easily be a soccer stadium.  Then of course there is this: 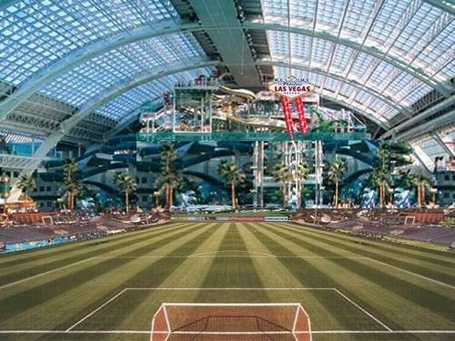 a concept of a soccer stadium that could be build on the south end of the strip near the airport.  All of this planning and ideas should tell you that perhaps what many thought was me being off the deep end by proposing that Las Vegas should be Team #20.

I still stick with a couple key points:  first build it on the location that the Silver State Arena was planned (a strip location would help with mass transit and walking traffic), second build it big enough to become a destination for the USMNT, International Friendlies, MLS Cup, and whatever other soccer matches you could think of (that means 40,000 seats).  You have a couple guys interesting in putting up money, or they were interested in it, now that you have the mayor on your side, firm up an ownership group and get your bid ready for MLS.

As more details come out, expect me to keep you up to date on all the news.