Share All sharing options for: 2010 Year in Sports Report by Nielsen - Soccer's impact

Well last year Nielsen released some numbers about MLS as part of their Face of Sports report, and we posted them for you to read and they were very focused on MLS. Well this year Nielsen has released their numbers and when it comes to soccer they focused on the World Cup.

The first thing they looked at however is why sports are so important to advertisers (and in turn sponsors), as pointed out in this graphic, the numbers of high income folks watching sports is incredible: 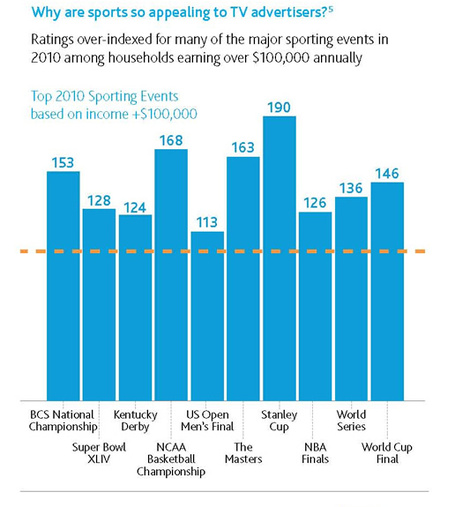 Perhaps even more impressive is that the World Cup final had higher ratings than the World Series, the NBA Finals, and even the Super Bowl.  The most surprising is that the Stanley Cup was the most popular among those who make over $100K a year.

after the jump, more numbers (all soccer):

So 24.3 million tuned into the World Cup Final in the US making it the most watched soccer game in US history,  111.6 million US viewers watched at least 6 minutes (kinda a random number) of the 2010 World Cup on either English or Spanish language networks, a 22% increase over 2006.

The top local markets for English broadcasts were:

The top local markets for Spanish broadcasts were:
One big question that a lot of people asked is would the World Cup provide a boost for Major League Soccer, well despite the TV numbers being down on the year for the league.  There was a bump for ratings after the World Cup: 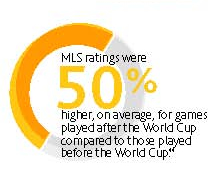 That is a nice boost and tells us that the first half of the season must have had really awful numbers.  There are some other factors as well, like the arrival of TH14 and Rafa in New York, but clearly there was a World Cup bump.
The last thing I wanted to take a look at is the number of viewers each of the US matches had, and then the final:

Considering the time delays on the matches those are some really nice numbers.  One final number that will get you thinking for the 2014 World Cup and beyond, globally 21% of people said they got at least some of their World Cup info from a mobile device.
Well there you go a look at some of the World Cup TV numbers from the people who know them Nielsen.
OFF MY SOAPBOX