Well Real Salt Lake wrapped up their final practice session before Tuesday's critical CONCACAF Champions League match against Costa Rican side Saprissa.  The session was about an hour, typical for RSL the day before a match, and much of the practice was preparing for the tactics they expect to see Tuesday night.  A good segment of quick passes and then passing the ball over defenders to clear the high pressure was entertaining to watch and should provide RSL with a number of options should Saprissa play that style of match. 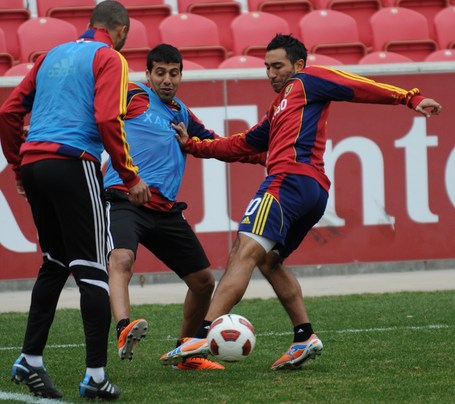 It was clear part of the drill was meant to get RSL more comfortable playing in very close quarters as both sides are expected to attack the ball no matter where it is on the pitch.

Speaking of the pitch, it clearly isn't in the form that most fans would expect, a bit rough around the midfield line, and a couple other patches but it does look better than it did for the match against Columbus a couple weeks ago. Tickets are selling well as the team is ahead of the pace they set for the Crew match, and with the forecast for a temp in the low 50's at game time and a high of the mid 60's for the daytime it should be enough to get a great turnout in support of the home side.

A couple of roster moves were made today, as Jared vanSchaik was released.  RSL did make some news today with the signing of their first Home Grown Player as 18yr old Donny Toia was signed, Donny was featured recently in a post by Keepin' it Real and was profiled by ESPN last spring.  RSL GM Garth Lagerwey made it clear that fans shouldn't expect Donny to see any first team action any time soon, but he is a player who will clearly benefit from the return of the MLS reserve division.

It was nice to see former New York Red Bull Conor Chinn still with the team, but his status is still that of being on trial with the team.

So the last half of practice saw the team divided into three squads that took turns battling each other on a small pitch, again it seemed that theme was preparing to react quickly both on offense and defense to opposition pressure and being prepared to react with several bodies around the ball. 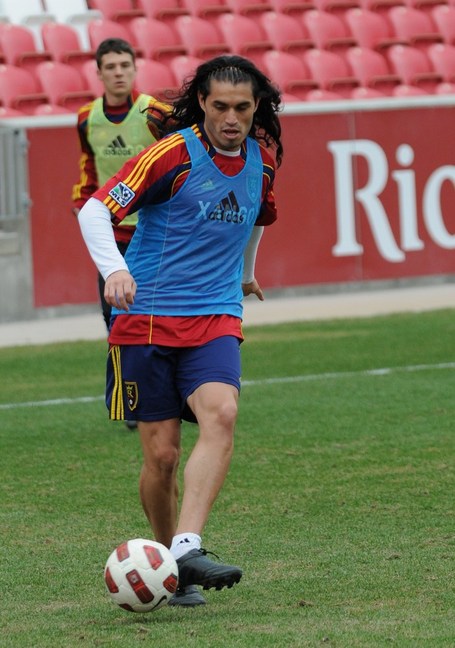 Fabi did well in a number of the drills today. There was a bit of bad news for RSL as Chris Wingert tried to give it a go in practice today but it appears that his ankle sprain picked up on Sunday will keep him out of the match tomorrow. 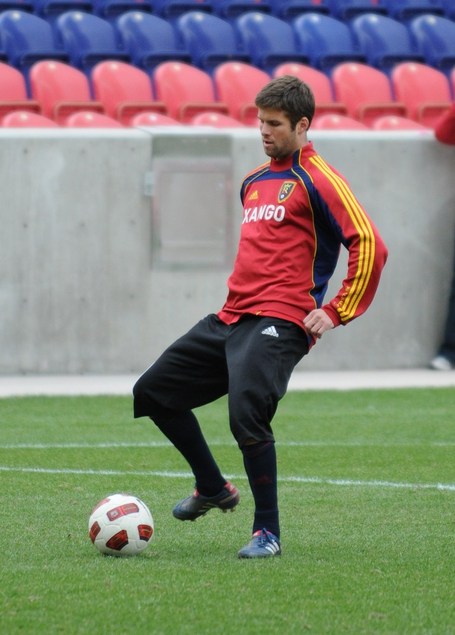 I am like the rest of the fans and hope we see a quick return to full fitness for Chris.  I know I have said it before but I do continue to be very impressed with the way the younger players work so hard in practice, guys like Jean Alexandre, Luis Gil, Paulo Jr., and others provide me with the comfort knowing that despite injuries and some busy stretches this year that there is clearly the depth on this roster to deal with just about any scenario.  I can't wait to get a chance to see how some of the RSL players take advantage of the Reserve division this season.

This isn't the big interview I was talking about that will come a bit later tonight, but I did get a couple minutes with second year player Collen Warner:

OK, that is it for today's practice. I will be posting my RSL vs Saprissa match preview shortly and then tomorrow I hope to have my "big interview" transcribed and posted.