So over the next couple weeks I will be offering up my preview of the 2011 MLS season, a lot of my observations will be from the 2010 season, practices, and of course our CONCACAF Champions League matches.

I thought this year I would look at the team by position, then look at the MLS schedule, and then my overall thoughts on the season including CCL, LHUSOC and my expectations for the team.  Let's start off with the men in net: 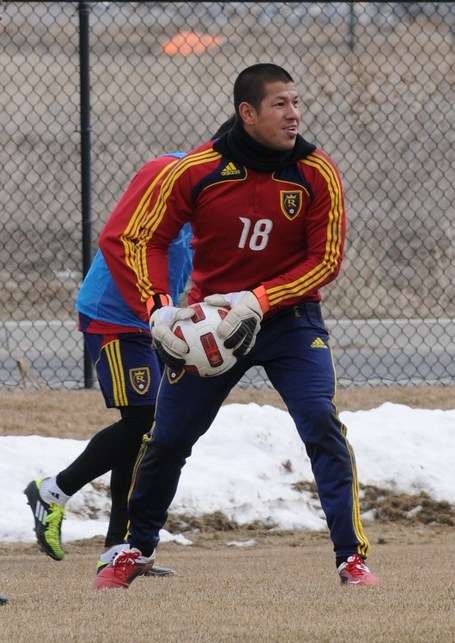 Nick Rimando (player profile) If you had to explain the growth of Real Salt Lake from the lovable losers in 2007 to being considered one of the top teams in the league the last couple years, you can't do it without talking about Nick Rimando. His career numbers are monstrous with over 23,000 minutes played, 966 saves, and 74 clean sheets. To think that RSL had traded him away without him ever starting a match in the spring of 2007, but then just a couple weeks later traded to bring him back to Salt Lake, Nick's career here might never had been.

Now he has started 119 matches for RSL, he has 44 clean sheets here and has played over 10,000 minutes, of course there is the MLS Cup MVP trophy he got in 2009 for some spectacular moments both during the match and in the PK shoot out.  His GAA in 2010 was 0.67 and he was in goal for 27 or RSL's matches and lead MLS with 15 clean sheets.

How impressed has RSL's staff been with Nick, well despite the fact that he still had over a year left on his contract the team worked out a new deal (with a pay raise) to ensure that Nick will be in goal for at least 3 more season. Many critics say that Nick is too small for a keeper, but one MLS blogger based in the UK thinks he is more than good enough to play in the EPL.

the other keepers after the jump:

It has to be chilly being in the shadow of Nick Rimando, who owns 2 MLS Cup rings, and has found himself back into the picture of the USMNT, but RSL's backup keepers have done well behind him and each are ready to come into their own. 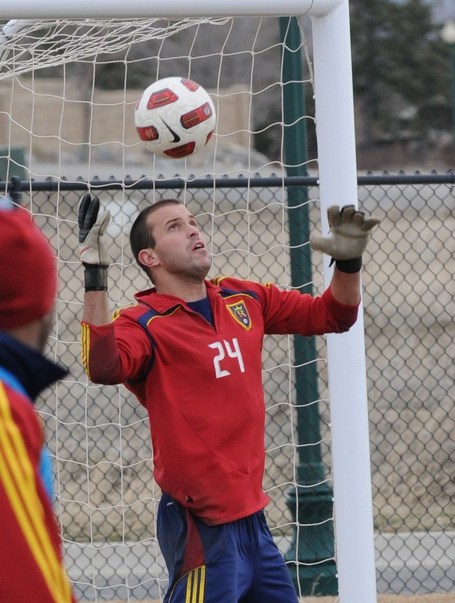 For Kyle Reynish (player profile) 2011 will mark his 5th year with the club and last year saw him start 3 MLS matches to give Nick Rimando a break, he posted an impressive 0.67 GAA with one shutout.  It has to be hard being the backup to one of the very best keepers in MLS, but Kyle has maintained his focus and dedication to always be ready if needed, I expect more of the same in 2011.  Kyle is another player who has spent time out on loans over the last couple years, but with the return of reserve league I expect that Kyle will be able to spend a huge amount of time here in Salt Lake this year. 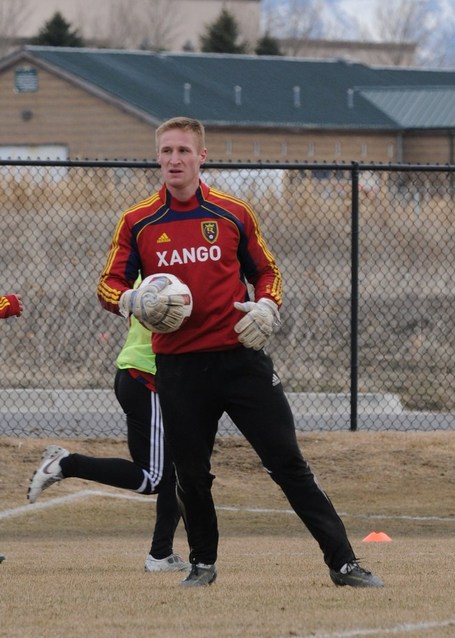 Tim Melia (player profile) may be the 3rd string keeper for Real Salt Lake but the teams he went on loan to in 2010 all sung his praises.  With expanded rosters and the return of the reserve league I would expect to see Tim split time between some loans and with RSL getting minutes as he continues to develop. During his loan spell with the Charleston Battery last year he started 19 matches and put up a 12-4-3 record with a 1.19 GAA and 5 clean sheets.

The RSL trio of net minders is impressive enough that wvhooligan.com ranked them the second best squad in MLS:

2. Real Salt Lake - And in a way I feel that Rimando was also snubbed last year in the Keeper of the Year race. Rimando is still very talented and continues to lead the charge for RSL in goal. I think RSL fans feel confident that as long as they have him between the pipes, they will be in any game. Backup Kyle Reynish isn't too bad either but he hasn't seen a whole lot of time defending the RSL goal.

I have to say that I actually would take Nick over any other keeper in the league, not only because he has such incredible vision and leadership on the pitch, but for the fact that in 4 years he has missed just 10 matches and only a handful of those were injury related.  Knowing you have a go to guy that you can count on every match is huge and with a couple of solid young guys backing him up, I will match the RSL staff against any in the league.