A great day for users of mobile devices:

For the First Time; Announces Update for 2011 Season

NEW YORK (March 9, 2011) - Major League Soccer announced today a major update to its MLS MatchDay 2011 App which adds support for iPad as well as new features such as live games and support for Apple's AirPlay and iOS 4.3. MLS MatchDay allows fans to follow the League and its 18 Clubs at home or on the go using their iPad, iPhone or iPod touch. The update was built from the ground up to work on all three devices, including, for the first time, iPad, taking full advantage of its unique capabilities and large, high-resolution display. 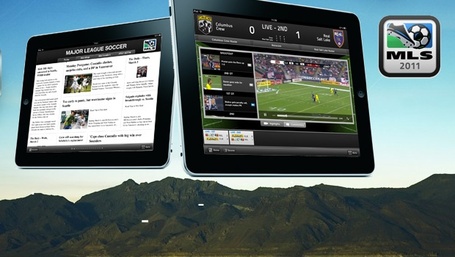 more info after the jump:

Starting March 18, MLS fans will be able to watch up to 180 live MLS matches on iPad, iPhone or iPod touch, as well as stream the content to their Apple TV using AirPlay.

Key features of the MLS MatchDay 2011 App include:

The MLS MatchDay 2011 App is available for free from the App Store on iPad, iPhone and iPod touch. (Note: The App will be available in Canada later today.)

Now I can hear some of you already complaining, what about our Android phones?  No problem, MLS also released the android app today, click here. Heck they even did a page about it.

It is clear that Major League Soccer is making good progress with their mobile apps.