RSL Fans are you ready? It is Rocky Mountain Cup time.

Share All sharing options for: RSL Fans are you ready? It is Rocky Mountain Cup time.

Yes it is that time of year when the rivalry voted the best by the writers at mlssoccer.com as the best rivalry in Major League Soccer.  This year it probably means a bit more as this is a matchup of the last two teams to win the MLS Cup, and teams that simply do not like each other much.

If you don't have your tickets yet for Wednesday night, you can get a great deal from utahsportsdeals.com where you can get two tickets for just $32.  While the forecast may be for a damp and chilly night, you can be sure that the action on the pitch will be heated as ever.

You know it doesn't matter how early or late it is in the season, this match will be a bit crazy.  Last year RSL had to come from behind in both legs to earn draws in both.  The home leg saw RSL put out a reserve heavy side, but it was Nat Borchers (the former Rapid) who scored in stoppage time to keep RSL's home unbeaten streak alive via the 1-1 draw.  The second leg was just as crazy as Colorado headed into stoppage time with a 2-0 lead, but it was a 90th minute goal by Alvaro Saborio that gave RSL fans hope, and then it was Salazar pointing to the spot in the 95th minute that allowed Saborio to tie the match up at 2-2 and that allowed RSL to hold on to the RMC.

Of course we all know what really caused the RMC to mean something, in 2005 I think most RSL fans considered Chivas as their primary rival, but in 2006 the act of one player took a nothing rivalry to the brink of chaos: 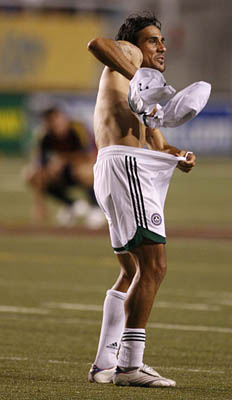 Yes that one act was enough to get the ire of RSL's fans, and perhaps the it was the trade of Kyle Beckerham to RSL from Colorado for Medhi Ballouchy that was the key act that raised the stakes for the Rapids fans, but sure enough this rivalry has become the most heated in MLS.

Now granted a bit of the bite has been removed as both sides now have their teams looking at much higher goals, the scheduling issues that are impacting the matches this year are clear but if you know anything about the fans and players of these two teams you should know that it doesn't matter when they play it will be a chippy match were neither side wants to let down their fans.

I do believe the element of having 3 guys who used to play for the Rapids (Kyle Beckerman, Nat Borchers, and Chris Wingert) on our team adds a bit to the rivalry.  I know that fans love to give former players an earful, like the lovely "Clint Mathis....Body by Budwieser" chants when he was in a Rapids kit, of course nothing was better than him coming by and rubbing his stomach after getting an assist for the Rapids.

Now some fans on both sides take things far too seriously, but the rivalry and dislike on the pitch is real for these two teams, and on Wednesday night it would be a shame for anyone to miss out on what is very likely going to be a great match.