Real Salt Lake by the Numbers, 6 matches in

Share All sharing options for: Real Salt Lake by the Numbers, 6 matches in

I know it is far too early in the season for things like this to really matter as 6 matches are now just 17.6% of the way into the season, but it is a fairly slow news week on the RSL front (other than the injury to Javier Morales) so I thought I would take a look at a couple of things.

So here are a couple of fun things that other people track:

sportsclubstats.com has Real Salt Lake at a 97.9% chance to make the MLS Cup playoffs.

For me there are really 3 numbers that are the most important things to look at with a team; Points, Goals for, and Goals against.  You can compare those numbers to other teams in the league, but also against the past to see how the 2011 version compares to them.

So first thing to look at is the points: 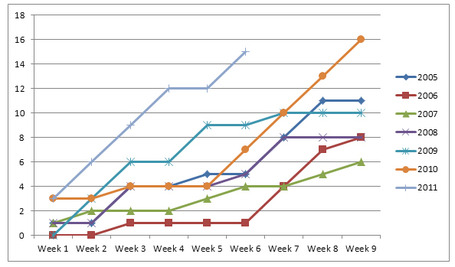 Real Salt Lake has never had this number of point this early in the season, in fact their best year 2010 it took until week 9 before we broke the 15 point barrier.  With 3 more May matches at home this month we have a great chance to make some great numbers.

Our 15 points is one fewer than the LA Galaxy currently have but they have played 10 matches already, and it ties us with the New York Red Bulls but they too have played more matches than RSL as it has taken them 8 matches to get to 15 points.

After points I think the defensive number of goal allowed is probably one of the most important numbers: 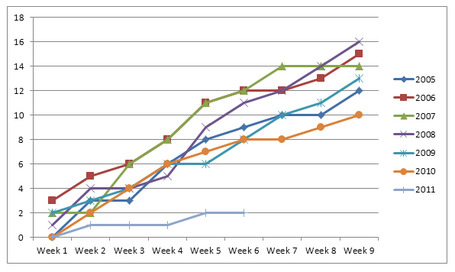 Yes the 4 clean sheets and only two goals allowed in our first 6 matches again are historic for RSL, and just 25% of the goals they had allowed at this point last year.  There are two other MLS teams that are really close to RSL in overall defense and have allowed just 3 goals to be scored against them.  The Philadelphia Union and New York Red Bulls both have been very solid both on defense and in goal this year, RSL will need to keep up the great work to keep their lead in this category.

Then finally there is the goals scored: 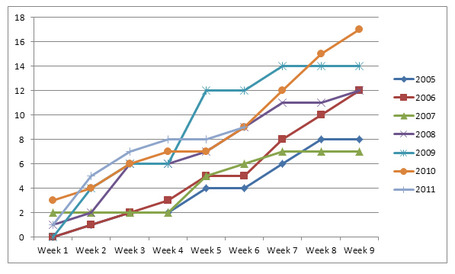 With 9 goals scored this year RSL find themselves in about the middle of the pack of their own history, with 2009 being the only year where we had scored more goals, but we had the same number after 6 matches in both 2010 and 2008.  The top team in MLS has 13 goals for, the Houston Dynamo, and there are 3 teams with 12 goals scored so far in 2011.

It is also interesting to note how many players have stepped up for RSL already this year to find the back of the net, 7 players have scored and only Javier Morales and Paulo Jr. have scored twice so far this year.  Last year 13 guys scored a MLS goal for RSL, so we know that we have a lot of depth when it comes to guys who can score.

Well there you go a quick recap of where RSL is after 6 MLS matches as far as the numbers stand, not too bad considering that RSL had some huge CCL matches and a lot of travel already this year.  I would love to see RSL get on the hot streak for scoring but I am more than happy with the overall numbers.