Another week and more expansion talk for Major League Soccer, focused on Vegas and Minnesota

Share All sharing options for: Another week and more expansion talk for Major League Soccer, focused on Vegas and Minnesota

It is clear that something good is going on for Major League Soccer, as more and more cities express an interest in the league. It could be the fan based movements of Miami, Tampa Bay, or San Antonio, it could be the regional based expansion that moves Atlanta or Orlando in to give us a team in the South East, the continued rumors about Chivas maybe moving to San Diego, oh yeah and a second team in New York City, which a couple months ago seemed almost like a done deal. Perhaps the most unlike markets were Las Vegas and Minneapolis, but then a couple of things happened.

First a bad snowstorm that overloaded the Metrodome room in Minneapolis and caused it to collapse, the result is a bill that would run $300 million (both the roof and to update the stadium) to fix a stadium that is a bit aged and seeing tenants leave (both the Twins and University of Minnesota have their own stadiums). A number of replacements were proposed but it looks as if the Vikings are looking to embrace one out in the burbs that would include a retractable roof, with a price tag of about $1 billion dollars with the cost split between the state which has promised $300 million, the Vikings owner Zygi Wilf who would put in about $400 million leaving a balance that they still have to figure out.

So what does that have to do with Major League Soccer? Well back in the summer last year Zygi mentioned that he would be very interested in MLS if the had a new stadium, well as soon as talk of the new stadium reached a fever pitch last week it was announced that the Vikings and MLS had indeed had conversations about bringing a team to a new stadium in Minnesota. Now I should mention I understand them wanting out of the Metrodome but I would love the stadium to be downtown. I lived just 5 minutes from the proposed location in Arden Hills and I am not sure how well the location would work out.

after the jump, a look at Las Vegas:

Then there was the purchase of the Las Vegas 51's, a minor league baseball team, that has triggered MLS talk again in Las Vegas. See Chris Milam, the guy who purchased the 51's has a much larger vision in mind. Milam has what is commonly called "Vegas Fever" and despite the economic downturn he has stayed very interested in a number of projects in Vegas. It is funny that he has also been linked with the old Wet and Wild site just south of the Sahara and north of the abandoned Fontainebleau casino project, which was once the rumored site of the Silver State Arena, and would be my first choice for a MLS stadium in Vegas.

However Milam's vision is bigger than that, it involves 3 stadiums (baseball, NBA, and MLS) and the location is not on the strip, but rather across the freeway from the Mandalay Bay Casino and event center. Not a bad location, but I liked when this type of project was mentioned for a downtown location. I do hope that consideration will be given for that location before any construction begins, I have no proof or rumor but I would have to believe that the Mandalay Bay location might be more attractive for Milam if he were looking to also include a casino near the location. If you want to take a look at some exciting images of what the project might look like, here is a link to the original plans that had the downtown location (it is a fairly large document so here is one image from it). 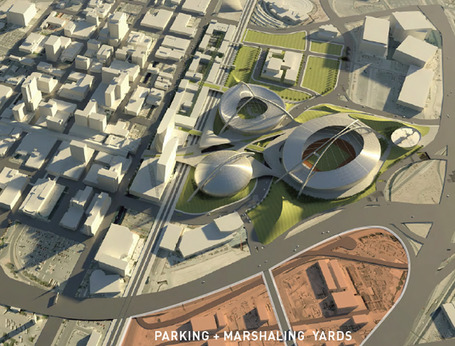 Now a lot of people point to the fact that almost all of the recent expansion teams have a long history with soccer and they are correct. Montreal has a huge USL team, Portland and Vancouver joined the league with a USL and NASL history, Philly had a huge supporters group formed years before their team, and on back to Real Salt Lake. Now folks will tell you that there is a rich history of soccer in Utah and there is but not at the professional level, and the success of RSL has shown everyone that while it may be easier to build on a history of the sport it isn't a necessity to succeed.

So let's talk a little bit about the market that everyone doubts, see everyone thinks Las Vegas is what they see on TV or when they go out on vacation, just a road of hotels and casinos. What they don't understand is that Clark County is over 2 million people and most of them have nothing to do with casinos or hotels. Their median income is over $58,000 per year up almost $8000 from just 10 years ago. The area is also one with incredible diversity, about 20% Hispanic, 9% African American, 5% Asian. Now I have to admit that I love Vegas, in fact I lived their twice over the last 20 years and loved it. So I think I am qualified to talk about the population, which often is considered a very transient group, and rightfully so as a lot of people do move there each year and a large number leave but over the last decade it has continued to be the fastest growing city in the US.

There has been one thing lacking for many residents, a team, a rallying point for the citizens to support and cheer on. Oh there are events in Vegas all the time, but none of them are designed for the residents, often they are made for tourists, things like the Rodeo, NASCAR, the Las Vegas Bowl, Boxing, and other events are always for tourists. Often out of the price range of local residents, like the many shows that dot the strip these events have high price tickets often $100 or higher. Major League Soccer would be able to offer fancy box seats and suites for those high rollers or tourists, but like most MLS teams they would also be able to offer season tickets in the $500 range and if the size of the stadium is 36,000 there would be plenty of opportunity for those big events as well.

I really do believe that the population of Las Vegas would jump to support a MLS team, heck they already are a top 10 market when it comes to viewing MLS according to Nielsen, they also were one of the top US markets for the 2010 World Cup. Often when academics look at sports fans they note that fans often support teams for the sense of community and to secure an identity with their city, no city offers a greater potential for this than does Las Vegas.

Both markets are still outsiders looking in, both would require owners to spend a lot of money in an economy that still has more questions than answers. Minnesota will likely see their stadium get built, and the plan in Vegas is a huge $1.5 billion dollar pet project of a billionaire who clearly loves the town and sports. It will be interesting to see how these two motivate other communities and potential owners to step up or move to the back of the pack.