Real Salt Lake by the Numbers (after 7 matches)

Share All sharing options for: Real Salt Lake by the Numbers (after 7 matches)

So last week we looked at how RSL stacks up against themselves and their own history, so this week I thought I would take a look at how RSL's numbers do against the rest of the league.

First up since the teams have all played a different number of matches I thought it would only be fair to look at the numbers on a per match average. So that is what we are going to do, first up is Points Per Match Average: 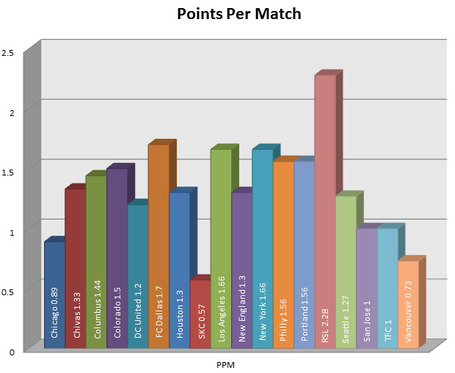 So with 3 points at stake in each match the higher this number the better, we see the bottom is Sporting Kansas City with just 0.57 points per match, while Real Salt Lake leads the league with 2.28 points per match.

So next up is a look at goals scored per match, and in this category the higher the number the better: 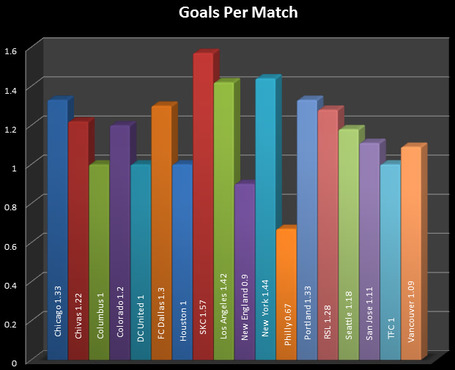 So the lowest number is the 0.67 goals per match scored by the Philadelphia Union and the highest number is the 1.57 that Sporting Kansas City is averaging. Of course you have to keep in mind that this number should be looked at with the goals allowed per match as well: 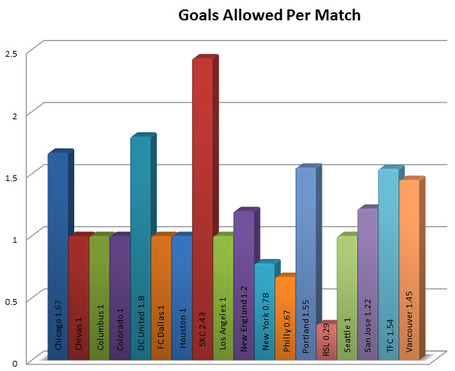 So it was an interesting week according to sportsclubstats.com which still has RSL as the most likely team in the league to make the playoffs, but only one team really improved their chances this week, Chivas USA was up over 12 percentage points. Despite the 0-0 draw with the Houston Dynamo, RSL still have a 98% chance of making the playoffs.

If you prefer the Sagarin ratings that are published via usatoday.com, well even there RSL is top in the ratings with a 2.85, the Galaxy are second with a 2.56 and New York is third with a 2.41. His forecasts both have RSL ending the year as the top team in MLS. Those rankings have 7 Western Conference teams in the top 10, only New York, Philly, and Houston join the Western Conference teams.

So while RSL didn't get the win, clearly the losses by New York and Philly helped out RSL in the various rankings. It will be a huge test for RSL this weekend as they head to Dallas for a Sunday showdown and a chance for their first ever win in Dallas.