Real Salt Lake - By the Numbers 10 matches in

Share All sharing options for: Real Salt Lake - By the Numbers 10 matches in

Well we all know that the only real numbers that matter in MLS are points, they determine your position in the conference and the team with the most of them wins the Supporters' Shield at the end of the year. Well looking at the points of teams in MLS is a fairly pointless endeavor since some teams have played 16 matches, others have played just 10, and some are in between. There is one measurement of how the teams compare and that is points per match, and lets just say there is only one team that is earning at least 2.0 points per match. Yes with 20 points from 10 matches RSL is right at the 2.0 average.

How does the current 20 points stack up against RSL's own past? 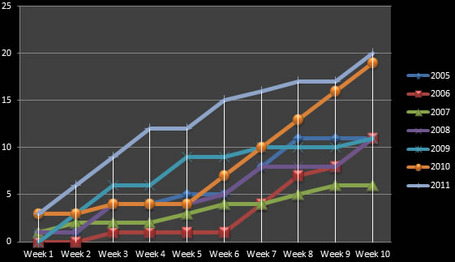 Yes RSL's 2011 total is the best in their history by just one point over their total from last year. With all the issues the team has had to face that is a very good thing. The team has 5 more matches in June, their best ever point total after 15 matches was 30 points in 2010. For RSL to stay at that pace they will need to get 10 points, or maintain their 2.0 points per match average.

Just a final note about points, in 2009 when RSL won MLS Cup they didn't hit 20 points until week number 16. So there is an area where RSL has struggled this year, and that is they haven't been leading the league in goals scored like they did in 2010, in fact their current 12 goals scored is middle of the pack behind 2010, 2009, and 2006. 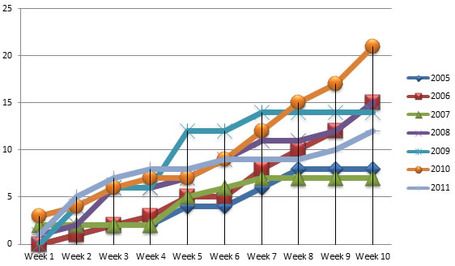 Now I have to be honest I love us scoring a lot of goals, but each of the last two years their have been some big goal matches at Rio Tinto against New England and even at the expense of Columbus. Those teams have yet to visit Rio Tinto Stadium this year.

So lets wrap up this look at the numbers by looking at goals allowed, last year RSL had 2 of the longest shutout streaks in MLS history. This year the team has had clean sheets in 7 or their 10 matches which is a very impressive number, and they have allowed just 4 goals so far this year, the fewest of any in MLS, but how does it rate against RSL's own past? 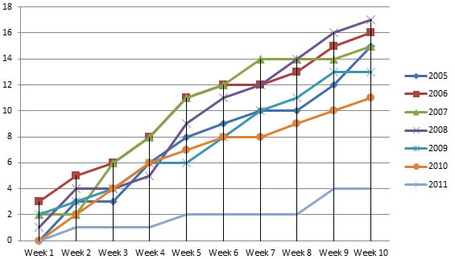 Yes the defensive efforts of RSL this year is historic even against their stingy defense of last year, a goals against average of 0.40 is simply amazing for a MLS team. If RSL could keep up that pace all year long they would give up just 14 goals in a 34 match season, historic numbers.

Well there you go, after 10 matches the numbers still look mighty good for me. If you don't believe me you can check out the Jeff Sagarin MLS ratings from USA Today which have RSL currently ranked 2nd in MLS, and projected to finish either first or second overall. You can also look at the numbers from sportsclubstats.com which project a 98.9% chance that RSL will make the playoffs.