Share All sharing options for: Real Salt Lake - By the Numbers Week 18

So it has been a while since I had time to update my spreadsheets of numbers but with a little time I thought it would be good to take a look at where we stand at the All Star break (or lack of break).  So you can look at the table and see the points and matches played for each team, but with so many teams having played different amounts of matches at this point there is a measure the levels the playing field (at least in large part) now I haven't broken this down by home and away but just by matches played: 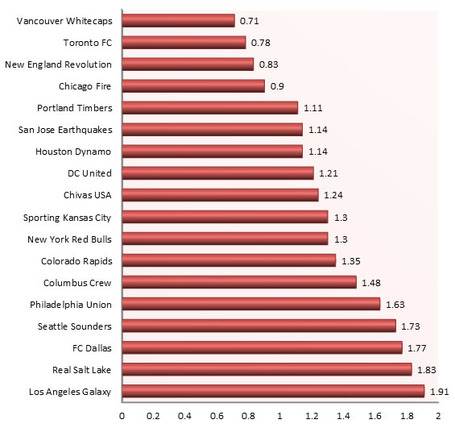 As you can see RSL is doing really well when you look at the points per match, but if you look at the schedule you will know that RSL has a road heavy couple months coming up, but if they can maintain the focus they had on the road at the end of 2010 they should be just fine as they try to close the gap with LA.  You should also remember that LA, FC Dallas, Seattle, Colorado, and Toronto could all be participating in the Champions League this year and if they the qualifying teams make it to the group stages that could mean each of those teams having 6 additional matches for each of them.  That could help RSL close or maintain the gap over them.

So the PPM allows us to see how we stack up against the other teams in the league but for me I always think it is as, if not more important to look at how we are doing against ourselves, so first up I am going to take a look at points: 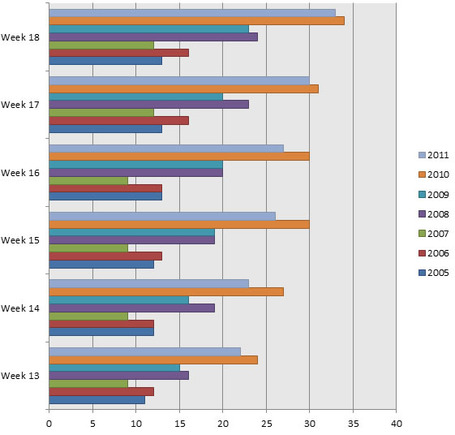 So if we consider 2009 and the run to the MLS Cup as our most successful season, then we can see we are 10 points ahead of the 23 points we had that year after 18 matches.  I consider last year our most successful season as we were battling for the Supporters' Shield and were the first MLS team to win a CCL group, and in comparison we are just 1 point behind the 34 points that we had after 18 matches last year.

Next up is the offense, and while many fans were left scratching their heads as RSL seemed to struggle in the first half of the year to find goals but the difference is actually in the couple of blowout wins we had last year.  We didn't have a 5-0 win over New England, the 4-1 win over KC, the 3-0 win at San Jose to start the year but we have seen the offense kick in over recent weeks in fact we have 12 goals scored in just the last 4 weeks, so where do we stand: 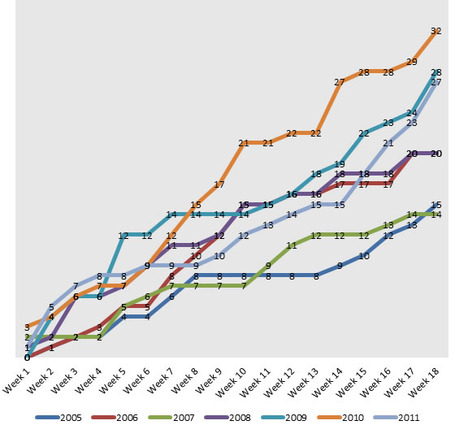 We can see that we are 5 goals behind our pace of last year and one behind the pace we set in 2009, but with the team finally getting healthy at forward we are likely to see us score more goals.

I think the thing that has made RSL simply one of the best teams in MLS has been the consistency of the defense and this year has seen RSL once again set the bar for all of MLS: 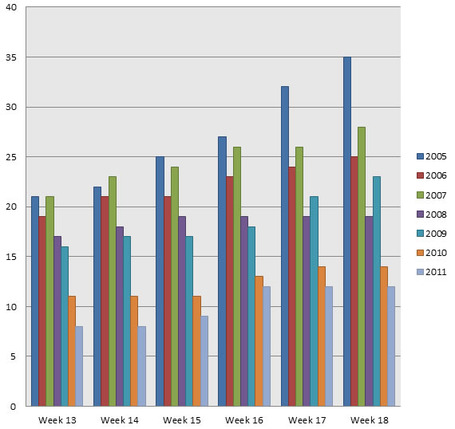 At no point in our history have we allowed fewer goals after 18 matches than the 12 goals we have given up.  That includes the history making numbers of last year.  This is a trend that makes me believe that heading into a road heavy second half of the year that we will be able to get quality results.

So there you have a good look at where RSL is after 18 weeks from a number perspective.

So a couple of other quick updates for you, on Sunday RSL held a scrimmage with the Ogden Outlaws down at Xango field, it was a chance for a couple trialists to get some game time, and we also saw some academy kids get some action.  You can check out some pictures here.  It was my first chance to see Chris Agorsor, Donny Toia, and Cody Arnoux in action and I will be honest the future of RSL looks really good, and some of these guys could be players we look to make an impact later this year.

There was a downside as Nelson Gonzalez got his foot stepped on in the first half of the match and it was found out later that he actually broke his foot and had to have season ending surgery.  I wish him a quick recovery.

There were a couple of guys in on trial, first was Jordan Graye, who has been with DC United and Houston recently and then Angel Castro from Honduras.  It was also the first time I saw Mikey Orellanna who is with the RSL academy and I have to believe may be one of our next HomeGrown players to be signed.

OK that is it for now, have a great day.