Perhaps there is no more telling sign about how pleased Real Salt Lake is with their draft picks than the point made by RSL GM Garth Lagerway that it isn't often that your best available player (the RSL draft philosophy) fits into the needs the way these 3 players have.

RSL gets Enzo Martinez and Sebastian Velasquez who are both two way midfielders with a lot of creativity but willing to be two way players. Garth said the team will be looking for them to be part of the outside of the diamond for RSL as they develop, he does believe that Enzo may be a player that is able to contribute this year for the team (similar to what Collen Warner did his first year). RSL also picked up a left back with Brazilian Diogo de Almeida, whom Garth described as a left footed player with good size and a solid college background.

Clearly one of the stories of the draft will be that Enzo fell so low to RSL, when usually the Generation Adidas guys go very quickly in the draft, but after a very good first day at the combine his play dipped a bit. For RSL they saw past that and were "Giddy" to be able to get Enzo, I did like that Garth mentioned that it seemed more like Enzo picking RSL than the team picking him.

Enzo was on a media conference call earlier this afternoon and he seems like a great kid. He seemed excited to be able to play for a team that plays the style that he likes and he considers himself lucky to be coming to Real Salt Lake. He says he has submitted his application for a green card, so hopefully he won't count against our International spots, he has lived in the US since he was 10 years old. Enzo mentioned that he has won a national championship at every level he has played at, and he is looking forward to doing that again with RSL.

I asked him what RSL fans could expect to see from him on the pitch and he said a player who is willing to work hard on both sides of the ball, play an attractive style of soccer and do whatever is needed to help the team. His favorite team is Real Salt Lake, which is of no surprise, his favorite player is David Silva of Man City.

Beyond being "Giddy" RSL GM Garth Lagerwey made a comment that I think summed Enzo up perfectly, He is an "RSL Player".

Here is a short video of Enzo talking about being selected by RSL:

As Garth was talking about our picks he mentioned that Diogo de Almeida was one of the few left backs in the draft and that RSL had been without a natural left back since 2008. He also said that Diogo was good athlete and that the team was excited to get him. 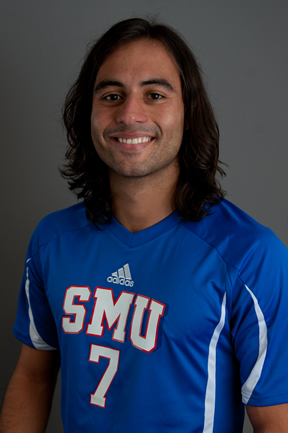 Diogo wasn't at the draft or on the media call, but he did make some comments to the SMU website about being selected:

"Being selected definitely is a dream come true," de Almeida said. "I've worked hard all of my life to get a chance to play for an MLS team. I'm excited for the chance to show I have the quality to play in the MLS."

Diogo was one of the 60 players that RSL invited to their combine in Arizona in December but he was unable to attend. In a testament to RSL scouting, as de Almeida said in that same article:

"The coaches said they've been watching me for a while," de Almeida said. "They were extremely nice and funny, but they were very professional at the same time. I know Real Salt Lake is a very good team. They have a good work ethic; those guys want to work hard and play every day."

With their final pick RSL stepped out of the expected boundries to pick a Jr. college player Sebastian Velasquez, but Lagerwey clarified that he was rated the top player at the RSL combine in December by Miles Joseph. When asked why they didn't wait until the supplemental draft (1-17-12) to select him, he mentioned that they had heard that several other teams were expressing interest and felt that with the 3rd to the last pick in the draft that it was a risk they were willing to take.

It was also mentioned that the excitement of seeing a reunion of Sebastian and Enzo was something that they were excited by the prospect of. I think any player who can score 35 goals and have 16 assists in 19 matches at any level is someone worth paying attention to. Garth describe them both as very hungry players willing to work hard and do what is needed to succeed at the next level.

A couple other updates from the conference call, RSL is still actively working on securing the services of both Paulo Jr. and Yordany Alvarez, deals are close but still not finalized. The team wasn't looking at forwards as they expect with the 5 players currently on the roster (Alvaro Saborio, Fabian Espindola, Paulo Jr., Cody Arnoux, and Chris Agorsor) that they have their two starters and a group of young guys who will need to step up and battle for that 3rd position. I agree that I am excited to see how our guys do up top, I expect all of them to come into camp ready to fight for minutes.

That is it for now, I will post the official RSL press release on the draft when it becomes available.