The Ones that Got Away: A look at RSL's departed players over the last year

A look at the players RSL has had on their books in the last year that haven't made it, for one reason or another: where they've landed and how they've fared.

Share All sharing options for: The Ones that Got Away: A look at RSL's departed players over the last year

As we prepare for an inevitable rebuilding period quickly approaching at Real Salt Lake - we're at most a year out - we might look at some of the players who we've brought in that haven't made the cut in the last year or have, for one reason or another, left the club.

Robbie Russell, now at D.C. United, was traded to the club for two distinct reasons: The first, and perhaps most obvious? Salary cap. It's the thing that always grabs players and hoists them to their next MLS club. The second is more human: Russell's wife, a lawyer, works in the area, and after 12 years, they're together. That's sweet, right? But Robbie was clearly a big player for us, and though his legs were getting a bit older, wouldn't have been a bad backup to Tony Beltran. But he deserved more than a backup role, and he went to a side that was a better fit. It's hard to fault anybody here.

Andy Williams, an RSL original, retired. The player could likely have gone another season, but again, salary cap concerns were limiting, and we were able to offer him a scouting position that didn't require a drop in pay grade. It's win-win in some ways, but his influence has been missed on the pitch at times, and he may feel he had more to give. A hard situation, but a fine solution, by any account.

Collen Warner, now at Montreal Impact, has started 25 matches for the Canadian club. It's about the level he reached last season at RSL, and we certainly would rather have kept him than let him drift off. But the Expansion Draft is a cruel mistress, and we lost the promising midfielder to the new boys. This surely was a better midfield for Warner to develop in and around, but he surely will be happy with a bigger role to play — but what could have been? It's the question on my mind, and maybe on his.

Arturo Alvarez, who plays a position, but I'm still not sure what it is, only played 16 games and started just 8 for us last season, despite generally being healthy. He just didn't fit in with our squad — at least on the pitch — and I'm sure he's happier in Portugal at Paços de Ferreira.

Jean Alexandre, who I always took a shine to, was never really at our level. At defensive midfield, he seemed risky, and up front, he wasn't anything more than a temporary patch. It's a bit sad that he's gone to San Jose and played a total of six minutes all season, but can you argue with results?

Rauwshan McKenzie seemed almost like one that really got away from us when Chivas USA came to Utah and shut up shop. It was disheartening - but seeing their defensive deficiencies later in the season, it's clear he's not there yet. He's still young and he still has time, but we have better options. No complaints.

Blake Wagner came in late last season as a fill-in left back and, despite winning a foul in stoppage time against Seattle and breaking up an attack in the process, didn't really do much for us. We let him go, and I don't think we've looked back. He's at San Antonio Scorpions now, where I hope he is finding success — 22 played and 22 starts would seem to indicate so.

Tim Melia was never more than a third-string keeper, and despite appearing on the bench once or twice, he never threatened to displace anybody. He's now at Chivas USA, where he's continuing to not play.

Young players the worst - well, more, they're the hardest to keep in a restrictive system in which winning is the stated goal. Briefly, then, a list of our players we've let go because development simply isn't something we can do en masse - yet. 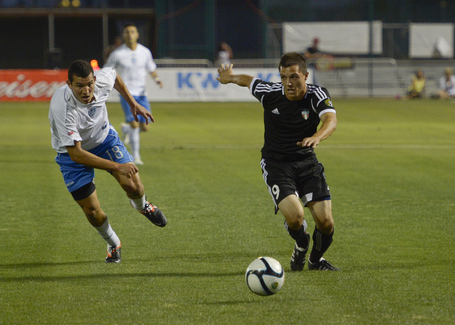 Donny Toia, our first academy signing, came in as a striker and departed as a left back. He's since moved to FC Tucson, where he played regularly (15 games played, 1273 minutes) and scored five goals. Not bad, kid.

Chris Agorsor, another striker, was once one of the brightest American talents, but a knee injury sustained in college saw him miss three years of action, and he ended up coming into MLS through a weighted lottery. But the club that picked him up, Philadelphia Union, released him not long after, and we snatched him up. And then we released him in February. He's now at Richmond Kickers, where he's scored six goals and found three assists in 1,371 minutes of action. Perhaps he can soldier further and make a return to MLS at some point.

Cody Arnoux, yet another striker — noticing a theme here? — was a player we really wanted to see make it. He arrived in a lottery draft, having played more recently with Vancouver Whitecaps but before that, with Everton's youth team, but injury doomed him. Once he got fit, it was apparent he'd take more time to bring up to speed than perhaps we had on our hands, and it was perhaps inevitable that he'd go. He's now at Wilmington Hammerheads, having arrived near the end of their season and notching 375 minutes.

Nelson Gonzalez, a technically gifted young Argentine midfielder, was only ever with us on loan, and in the end, when we were interested in renewing, his parent club, Quilmes out of Argentina, wanted more than we could afford. At the time, somebody important remarked that to bring him back, we'd basically have to make him a designated player, and that was certainly never on the cards. Whether this was for transfer reasons or salary reasons is hard to say - but it was an easy decision for us, despite our best wishes.